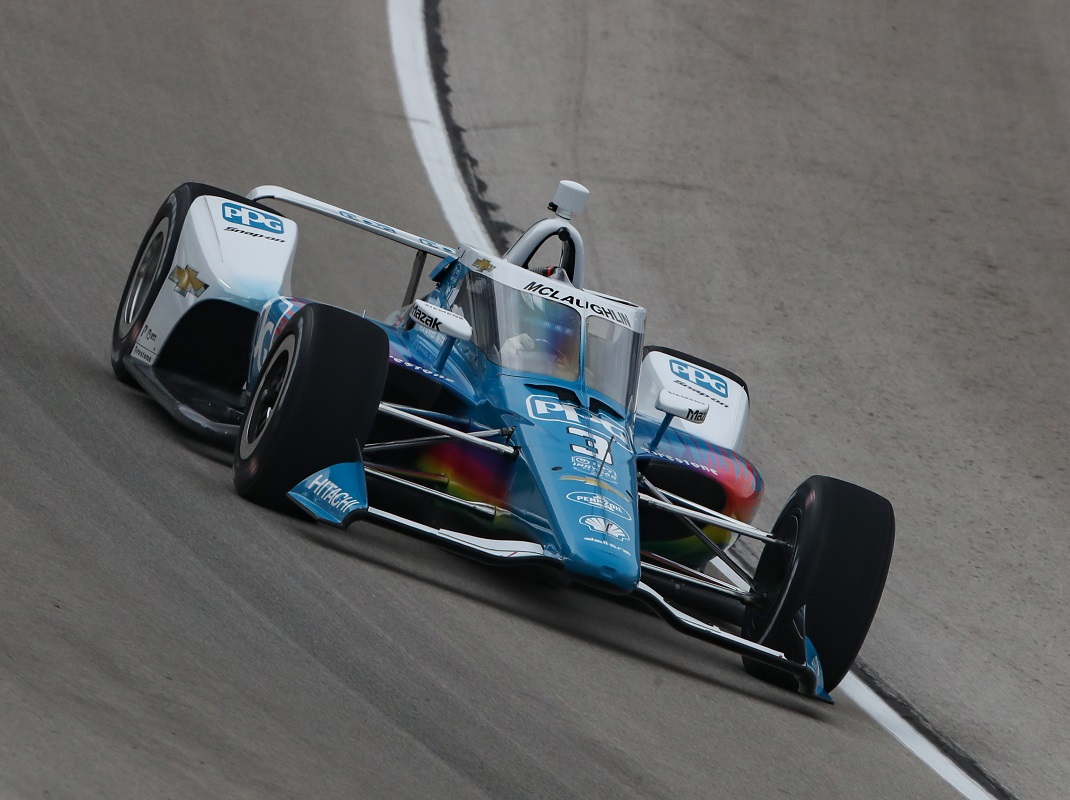 FORT WORTH, Texas – Scott McLaughlin of New Zealand has long admitted that fellow Kiwi Scott Dixon is his racing hero.

The three-time Virgin Australia Supercars champion has often daydreamed of competing against one of the best NTT IndyCar Series drivers in history for a race victory in a high-speed Indy car.

That dream became a reality Saturday in McLaughlin’s first-ever race on an oval.

The Team Penske IndyCar Series rookie was in position to race the six-time IndyCar Series champion to the checkered flag in Saturday night’s Genesys 300 at Texas Motor Speedway.

“Look, I’ve been watching Scott since really 2001 when he first joined PacWest, around that time,” said the 27-year-old McLaughlin after finishing second to Dixon. “Then obviously when he went to Ganassi and won the championship in 2003. ’08, the Indy 500, I’ve been a big fan, a massive fan.

“So, to follow him and race him towards the end, have genuine pace for him, was pretty cool. I said to the guys in the caution period, ‘This is pretty cool, isn’t it?’ I think they were trying to calm me down a little bit. It was cool. I’m probably too happy finishing second. You won’t get me like this ever again. I’m sure hopefully we can go one better next time.”

Though Dixon scored the 51st victory of his career did not matter to the young driver from Christchurch, New Zealand. To realize his dream in his first oval race, and the fourth NTT IndyCar Series race of his career was enough for McLaughlin to feel like a winner.

“It’s definitely the happiest I’ve ever been finishing second,” McLaughlin said after Saturday night’s race. “It’s one of those things where a little bit unexpected just because I knew how tough it was going to be sort of getting through the field. But things fell our way. For it to happen on an oval is a pretty proud moment.

McLaughlin showed the composure and tactical sense of an oval racing veteran in his first race on an oval, staying within about half a second of Dixon during the closing laps.

Dixon approached lap traffic with two laps to go, with the turbulent air from those cars slowing his charge toward the checkered. But he held off McLaughlin long enough for victory, averaging 173.036 mph.

“I’ve never been this bloody happy to finish second in my life,” McLaughlin said. “I’m really stoked. I just couldn’t get Scotty (Dixon) there at the end. But I’ll tell you what: It was bloody cool battling with my all-time favorite hero, Scotty Dixon.

“Two Kiwis, one and two. My Mom and Dad are watching at home (in New Zealand), for sure.”

Dixon was impressed with McLaughlin’s effort and has been willing to help his young countryman with advice, even though they are on rival teams.

“It was really cool to look at that monitor on my steering wheel and see that it was the (No.) 3 car behind me,” said Dixon, who has gained IndyCar immortality with Chip Ganassi Racing. “I haven’t even got to see Scott yet, but definitely a congratulations to him. That was a tremendous run.

“He is definitely very fast. There wasn’t much tire deg at the end of the race there, especially with the cooler conditions. Exit of two just became a very long straight until you got back to turn one. I definitely didn’t want him to get too close to get that big run through three and four, as I think you could definitely pull the pass off as we’d seen earlier in the race.

“It’s a huge result for a race for a couple of Kiwis, which is great to see. Commenting pre-season, people are like, ‘How do you feel about having another Kiwi on the grid?’ I’ve been waiting 20 years for it. It’s great to see him over here.

“He is a massive talent. He’s going to have a lot of victories, man. I have to try to hold him off while I can.”

Having a chance to race for a victory against his hero was something that McLaughlin had set as a goal his rookie season. Dixon was asked to reflect on his memories of racing against his heroes when he was an up-and-coming driver earlier in his career.

“I think my heroes in New Zealand were my dad to start with, then Kenny Smith, who is a racing legend, helped me a lot through my career,” Dixon recalled. “Then people like Greg Murphy and that, more obviously in New Zealand.

“In America, I remember the first season in CART I had a massive battle with Michael Andretti at Road America, which was mind-boggling. He ran me off into the grass in the middle straight, I T-boned him in hairpin in five. Those moments were kind of surreal for me.

“There was a lot. Obviously, Dario Franchitti, Paul Tracy, Michael, the Unsers. Man, the list was incredible. These were people that had amazing stats and people I looked up to for extremely a long time and enjoyed watching them race.”

Saturday night on the high banks of Texas Motor Speedway, Dixon was able to provide a mind-boggling memory for McLaughlin, who gave IndyCar a glimpse of potential greatness to come.

More in this category: « Hamilton Cruises To Portuguese Grand Prix Win Two More For Dotson During California IMCA Speedweek »
back to top