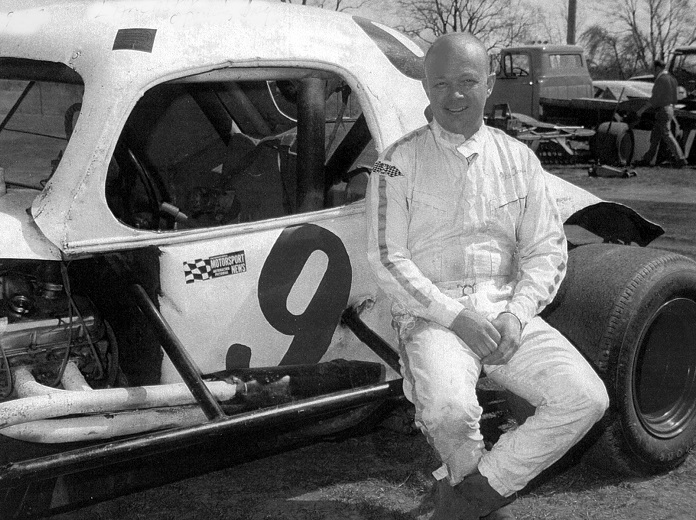 He is survived by wife Stephanie, daughter Susan, and son Tim. He was pre-deceased by his son, James.

Chuck Boos’ stock car racing career spanned four decades in an era when drivers built their own cars and parts.

“In 1947, they started running stock cars at Civic Stadium. We started going and holy cow, we went every night,” said Boos. “In 1948, I built a car. My dad helped me, in fact, he built most of it. It was a flathead Ford coupe. It only cost $35 to build it: two bucks apiece to bore a cylinder and $25 for a set of pistons and that’s all we put into it. We ran street tires.

“I was too young to drive it so a guy by the name of Bob Hamilton drove it a few times, at Lockport. We didn’t do much, it was just a hobby.”

Racing was interrupted by a Harley-Davidson, then a hitch in the U.S. Navy.

In ’56, Boos returned home to Lewiston and landed a good-paying job at Carborundum. Chuck and Hans built another flathead Ford stock car for the local circle track wars at Humberstone, Civic Stadium and Ransomville.

Chuck’s first race at Humberstone netted $12. His first Civic Stadium foray earned an $11 check from a guaranteed purse of $500. In ’59, his ’37 Ford coupe’s flathead was replaced with a 292 cubic inch V-8 Ford, but it still could not keep up with the Chevrolets.

That was when the resourceful father-son duo, joined by mechanic Bill VanDenBosch, started making their own parts. Hans turned a three-quarter-ton Ford truck rear end into a quick-change rear end and they found themselves in the racing parts business.

“Other guys started wanting them. I could build about six a year,” noted Boos. “And we used to melt aluminum and cast our own racing hubs. We used to put ’59-’60 Buick brake drums on them, because Buick was the only make that had aluminum brake drums and they’d cool better than iron. I’d sell a complete rear end for $125 and hubs for $25. We made rear ends for Jerry Cook, Bill Rafter and Ed Ortiz. That gave me extra money to buy a better engine and I started running better.”

“I finished a new car halfway through the season. It was an offset car, nine inches to the left. By then we were running a small block Chevy engine. You had to match the engine to the body, so I had a ’36 Chevy coupe. I was so happy I just hollered and screamed. I think I won $200 or $275. Then I won seven consecutive features at Speedway Park and five in a row at Merrittville.”

Boos took the car to the one-mile track at Langhorne, Pennsylvania, started near the rear and finished 10th. The next year he was hit by another car, flipped and was knocked unconscious.

“It knocked the two left-side wheels off the car and I was sitting there, unconscious. I opened my eyes and all I could see was sky, and I couldn’t hear anything. I thought I was in the air, so I grabbed the steering wheel and tensed up. Then some guy stuck his head in the car and asked, ‘Hey, are you okay?’”

Boos switched his Saturday-night travels to Lancaster Speedway and won the first race on the track’s new asphalt surface in 1964.

Racing the same car on dirt on Friday nights and asphalt on Saturdays, he won the points championships at both Ransomville and Lancaster in 1967.

Boos found the asphalt of Bob Slack’s five-eighths-mile Cayuga Speedway to his liking on Friday nights and won three consecutive championships, from 1968-’70.

You might say Boos won everywhere he raced. He competed each weekend against some of the sport’s biggest names: Merv and Roger Treichler, Bill Rafter, Maynard Troyer, Ed Ortiz, and a newcomer named Richie Evans.

Chuck piloted a no-frills car, painted refrigerator white, with a red No. 9 on the sides. Chuck raced, and won, without sponsorship. He never asked anyone for money. The winnings had to pay the bills.

As the decade wore on, the writing was on the wall: going faster was going to cost a lot more. It became harder to compete against men who had sponsorships, professionally-built engines and tire deals.

“In late ’68, Firestone came out with a bigger (wider) tire. In ’69, I had to change to a big-block Chevy because the small block couldn’t keep up with the big tires. Before that, the big blocks would spin the tires because they had no traction. After you got more traction, you could put more power to the track, so I went with a 427 and won about 15 features that year.

“In the ‘70s, big money started coming in and I started downsizing. Some racers were coming in with haulers that cost more than my entire race car. Tires got so good you didn’t have to know how to set up the race car. The tires made up for the suspension. I started getting tired, and in ’75 I quit.”

He almost went out in a blaze of glory, contending in Oswego (N.Y.) Speedway’s International Classic in ’75 before being forced to retire short of the checkered flag.

Without fanfare, the plain white No. 9 stopped going to the tracks.

Boos raced in an era when drivers respected their competitors’ equipment. The term ‘rubbing is racing’ had yet to be invented – or tolerated.

To a man, each of his racing friends and former competitors remembered Chuck – often referred to as ‘Chucky’ – as a true gentleman. A nice guy.

“I only lost my temper with another driver once during my career. I didn’t ever want to hit anybody. I liked everyone. I had no enemies. I’ve had a wonderful life.”

More in this category: « McLaughlin Battles His Racing Hero In Texas Two More For Dotson During California IMCA Speedweek »
back to top