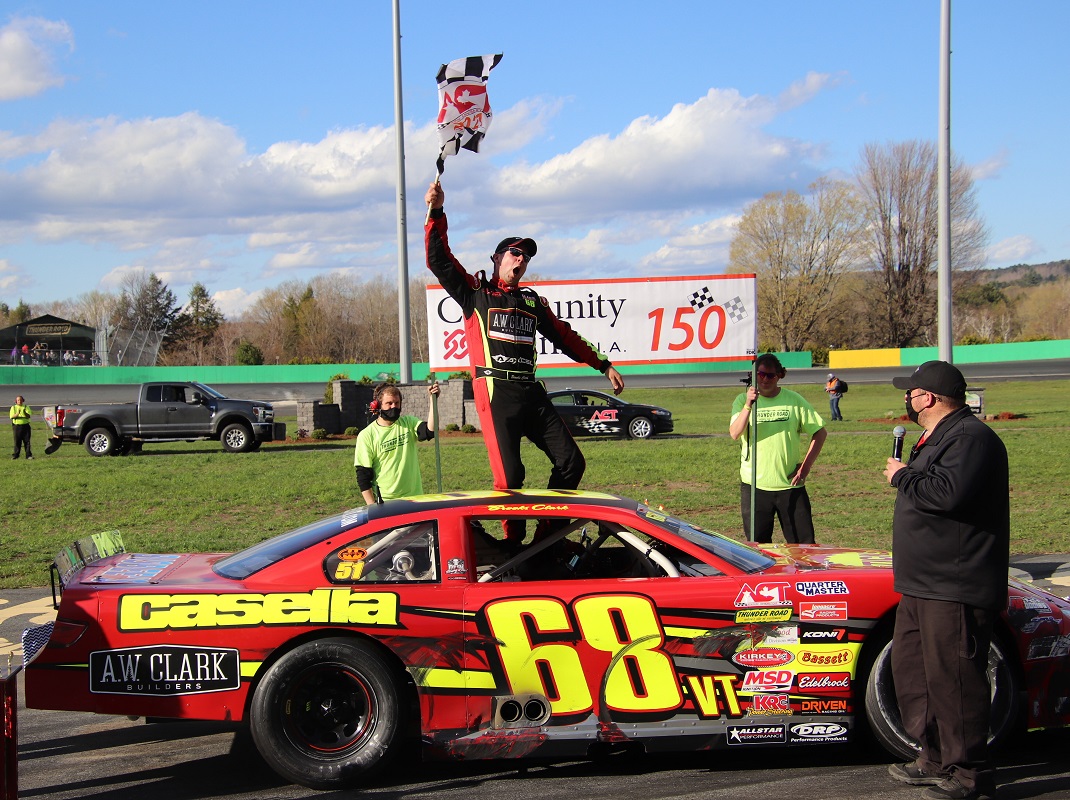 BARRE, Vt. — Brooks Clark roared from deep in the field to get his first American-Canadian Tour victory in a wild Community Bank N.A. 150 at Thunder Road Int’l Speedbowl Sunday.

Clark took the lead for good from Trampas Demers with 21 laps to go and held him off for the victory after starting 21st on the grid.

The biggest victory of Clark’s career came in an event with more twists and turns than a campfire mystery tale.

Several early contenders were sidelined by a spate of midrace carnage before Clark and Demers, two accomplished locals, put on a show down the stretch.

Kyle Pembroke started on the pole and led the first 54 laps. Behind him, the field shuffled early and often. The first major surprise came on lap 22 as reigning ACT champion Jimmy Hebert went to the pits and did not return.

Six circuits later, Matt White’s car abruptly shut down while challenging Pembroke. Bobby Therrien assumed second on the restart, but couldn’t keep up on the outside, as D.J. Shaw and Scott Dragon both rolled past underneath.

Dragon then took the high lane around Shaw for second shortly before the third yellow on lap 53 for Tyler Cahoon’s stalled automobile.

The next two laps would completely change the complexion of the race. Pembroke led on the initial restart, but Dragon put his nose out front for lap 55.

As Dragon tried to clear Pembroke coming out of turn four the next time around, the two cars touched, and Dragon ended up slamming the turn one wall head-on.

Dragon wasn’t hurt in the incident, but was done for the day, while Pembroke was sent to the rear for his involvement.

Demers inherited the lead for the restart followed by Shaw, Clark, Christopher Pelkey, and ACT rookie Erick Sands. As the field took the green flag, Pelkey and Sands got together, triggering a seven-car pile-up entering turn one.

After another caution at lap 63 when rookie Cooper Bouchard backed into the turn one wall, the thinned-out field started making a different kind of fireworks.

Clark was all over Demers through the seventh caution on lap 81 for Switser shutting down. The Fayston driver went to the outside on lap 85, and finally inched in front with 89 complete.

On the restart, it was Demers taking back the upper hand after multiple lead changes and some door-slapping along the way. Demers, who was also looking for his first ACT win, put a bit of a gap between himself and Clarks.

However, Clark ran him back down on the long green-flag run, eventually going back around the outside on lap 129.

Behind the lead duo, fellow Wolcott natives Marcel J. Gravel and Brendan Moodie put on a war of their own. After multiple crossover moves and many side-by-side laps, Gravel finally got clear of Moodie with 17 laps remaining, taking the final spot on the podium.

Moodie held off a brief charge from Ben Rowe for fourth. Shaw came back from multiple midrace pit stops for a sixth-place finish.

More in this category: « Ruud Makes It Four Straight In TC America Two More For Dotson During California IMCA Speedweek »
back to top