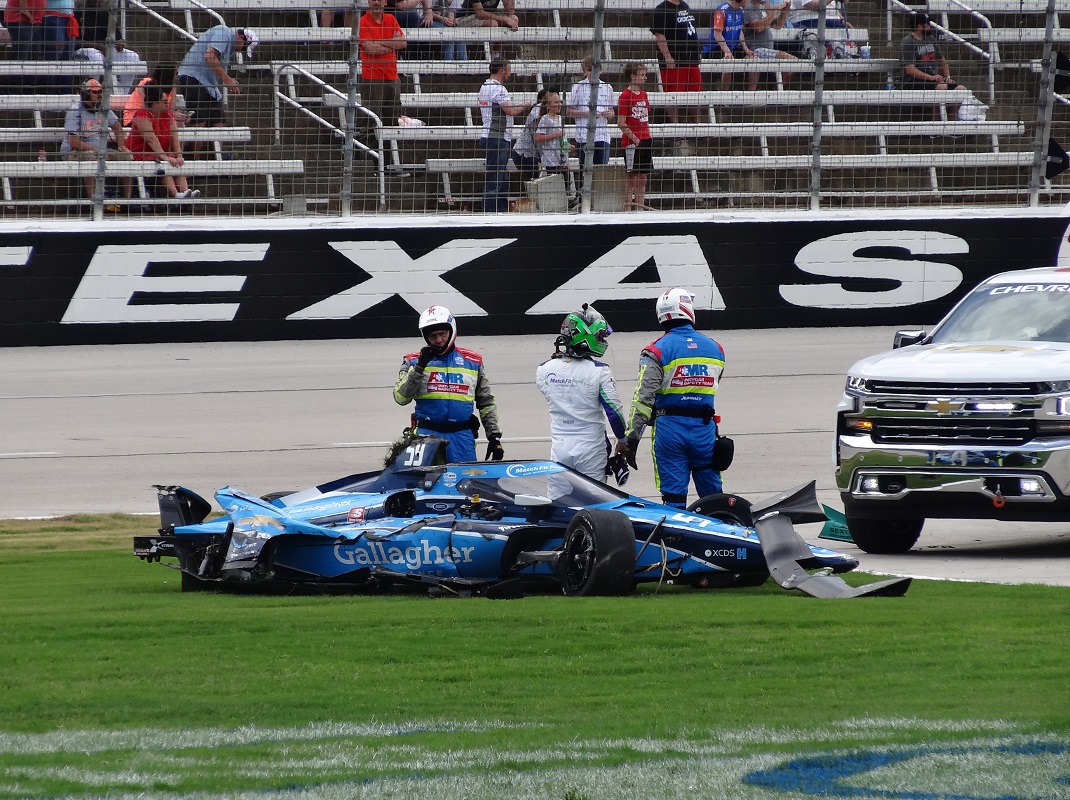 FORT WORTH, Texas – A massive multi-car crash heading to the green flag of Sunday’s NTT IndyCar Series XPEL 375 at Texas Motor Speedway marred the contest before it ever really got started.

The crash was triggered when Dale Coyne Racing with RWR rookie driver Pietro Fittipaldi ran into the back of AJ Foyt Racing’s Sebastien Bourdais. That sent cars at the back of the field scattering.

The Carlin Racing Chevrolet driven by Conor Daly hit the outside wall and flipped upside down before skidding into trioval grass and slowly rolling back onto its wheels.

Other drivers involved in the crash included both cars for AJ Foyt Racing including Dalton Kellett and Bourdais, Andretti Autosport driver Alexander Rossi and both Dale Coyne Racing cars including Ed Jones and Fittipaldi.

The remainder of the field had to follow the pace car down pit lane because the front straightaway was blocked with crashed cars and safety vehicles.

The first 18 laps of the race were run under caution before the green flag waved to resume competition. All drivers were checked and released from the infield care center at Texas Motor Speedway.

For Bourdais, it was the second straight night that he was involved in a crash in the IndyCar doubleheader.

His A.J. Foyt Racing crew worked until 12 midnight Saturday to repair crash damage from Saturday night and were allowed back in the garage at 10 a.m. local time to finish the rebuild of the No. 14 Chevrolet.

It never got to complete a single lap.

“There must be a target on our back or on our butt because I got drilled twice in two races, or 58 laps,” Bourdais said, also referring to Saturday night’s crash when Team Penske driver Josef Newgarden ran into the back of him. “Very disappointing for the No. 14. The AJ Foyt Racing team did a really good job. We came back from nowhere and didn’t get to show anything for it today. We couldn’t even get the green flag.

“It’s very disappointing. That was a very big hit. A lot of damage again. I’m not quite sure what happened. The front didn’t go, and the back didn’t so, so we were in the middle. It knocked the wind right out of me. It was a solid piece of steel transferring all the energy to your back. It’s not a good feeling.”

When asked his thoughts on a doubleheader weekend on the high banks of Texas Motor Speedway, Bourdais said, “I’m not going to get involved in politics.”

Rossi complained that IndyCar should have had a qualification session earlier Sunday instead of sending cars into the race based on entrant points from Saturday night’s Genesys 300.

“We’ve been standing around all day here doing nothing when we could have taken one hour to qualify,” Rossi said. “If we had done that, I would haven’t been starting in the back of the field where the crash happened.”

Fittipaldi said as the field was heading to the green flag, he saw the field slow up and his Honda got into the rear of Bourdais’ Chevrolet.

“I got into the back of Seb when I saw the field slow down at the start and that triggered everything,” said Fittipaldi, the grandson of two-time Formula One World Champion and two-time Indy 500 winner Emerson Fittipaldi. “It’s a real shame that happened.”

Daly said there are too many crashes on restarts and starts in IndyCar.

“I had the best view because I was last, but all it takes is one person and then we were nose-to-tail,” Daly said. “All I can say is it’s no fun to be upside-down in an Indy car. I’ve never had that happen in an Indy car before.

“On our bingo card of terror things that have happened to us this year, I don’t know what it is going to be next. I’m good, though. I got through it.

“Two giant cars came together, and I was in the middle. It’s easy to get upside down in an Indy car and that sucked, but I’m good and it’s on to Indy.”

More in this category: « Gagne Finally Scores In MotoAmerica Superbikes Two More For Dotson During California IMCA Speedweek »
back to top