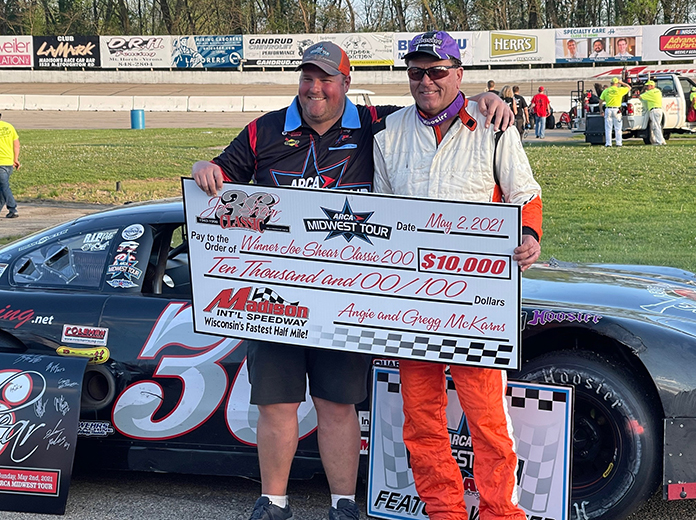 OREGON, Wis. – Rich Bickle Jr. held off a late charge from Luke Fenhaus to score a popular victory in Sunday’s Joe Shear Classic 200 at Madison Int’l Speedway, the opening race of the season for the ARCA Midwest Tour.

Bickle emerged from his car, which was a tribute to Joe Shear, in victory lane to a loud cheer from a nearly full stands and put his head down on the roof of his car to collect his thoughts after pulling off an emotional victory on Sunday afternoon.

“We have been on working on this deal for a long time. We have bad ass fast at a lot of places,” an emotional Bickle said in victory lane. “The car wasn’t that good, I just think we had some help.”

Much like he has done so may times during his lengthy career, Bickle carefully managed his car during the first half of the race to prepare for a run to the front in the second half.

By lap 100 Bickle was running in the ninth position. The caution flag waved on lap 104 when leader Dan Fredrickson lost an oil line, causing Jonathan Eilen and Luke Fenhaus to spin in turn four to bring out a caution. Fredrickson’s team was able to get the oil line repaired and he returned to the event.

Series officials made the call that Fredrickson was the cause of the caution, thus giving Eilen and Fenhaus their spots back.

During that caution everyone except Casey Johnson made their pit stops and put three fresh tires on their cars.

The restart on lap 115 had Johnson in the lead, but a big puff of smoke came out of Eilen’s car and he went to the pits. With Johnson on older tires, he faded back in the pack while Dennis Prunty took the lead on lap 117. Fenhaus followed Prunty to move into the second spot.

Ty Majeski, who fell back to 11th after making contact with Fredrickson earlier in the race, came back through to take over the third spot by lap 119. He would pass Prunty for second on lap 130.

On lap 134, Bickle would get by Prunty for the third spot while ahead of him, Majeski was trying to chase down Fenhaus for the top spot. On lap 145, the top three were nose to tail.

Dalton Zehr started making his charge as he got by Majeski for third on lap 165. A lap later a planned competition caution slowed the field.

Johnson took advantage of that caution to come in and get his fresh tires. On the ensuing restart on lap 172, Johnson’s car came to a stop on the front stretch to bring the caution back out. Johnson would retire with rear suspension issues.

The field restarted on lap 177 with Fenhaus battling Bickle for the lead. Bickle would have the lead by a nose when the caution flag waved on lap 180 for Kody Swanson’s spin in turn two.

Bickle would continue to lead with Fenhaus in tow until the final caution on lap 192 as Prunty came to a stop in turns one and two.

The final eight laps saw a battle for the ages, with Bickle trying his best to hold off Fenhaus. Despite getting to Bickle’s inside, Fenhaus was unable to complete the pass and Bickle held on to earn the victory in the Joe Shear Classic.

“The four kid (Fenhaus) is really good and they have a lot going on behind their program,” Bickle said after the race. “He made the old man work today. It just feels good to win.

“He was me and I was Joe Shear all over again,” Bickle said.

Fenhaus, even though he finished second, didn’t mind with who beat him on Sunday.

“It was a good run, I can’t complain finishing second to Rich Bickle,” Fenhaus said after the race. “He got by me and he was the better car. But those cautions helped me a ton and I tried to get a good finish out of it at the end, but again I can’t complain.”

More in this category: « Multi-Car Crash Mars Start Of Texas IndyCar Race Two More For Dotson During California IMCA Speedweek »
back to top