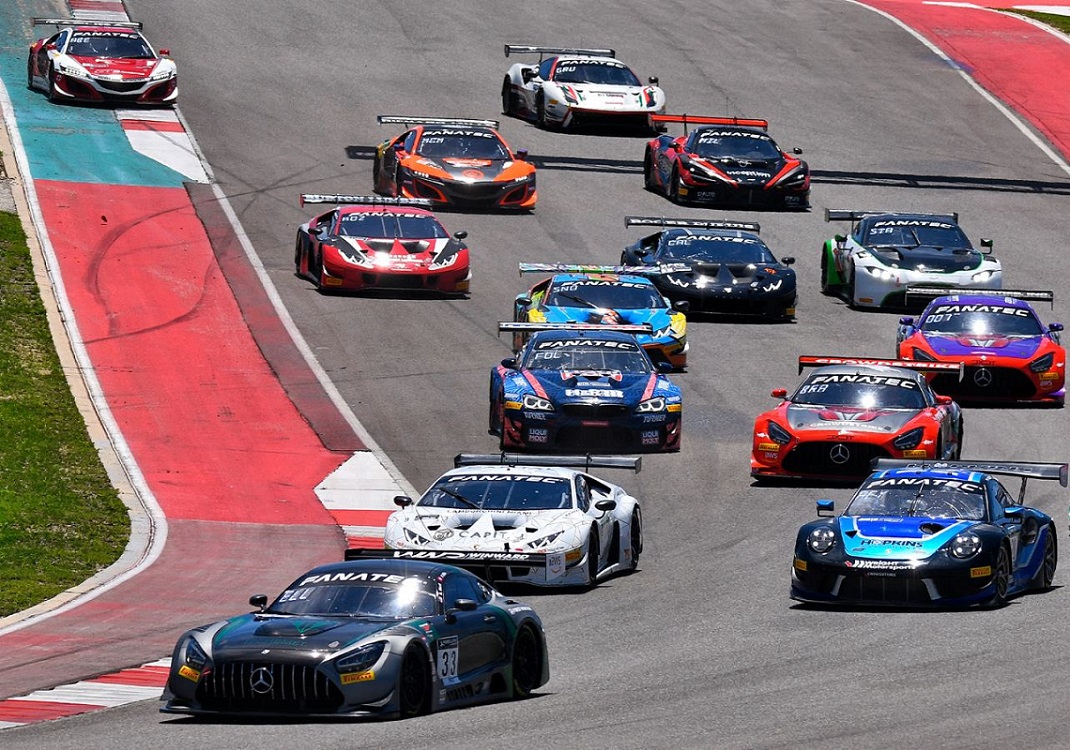 AUSTIN, Texas – On the only completely dry day at Circuit of the Americas all weekend, the second race of the Fanatec GT World Challenge America powered by AWS doubleheader found the No. 6 K-PAX Lamborghini take the overall and Pro wins for the second time.

In Pro-Am, the No. 04 DXDT Racing Mercedes-AMG GT3 took the top step of the podium, while the AF Corse No. 61 Ferrari 488 GT3 stayed the course and took home the top billing for the Am class.

The field went green with top qualifier Philip Ellis in the No. 33 Winward Racing Mercedes-AMG GT3 heading into turn one with the other five top challengers essentially nose-to-tail entering and exiting.

All cars survived without incident, but both the No. 04 DXDT Mercedes-AMG (Braun/Kurtz) and No. 9 TR3 Racing Ferrari (Altoe/Ghandour) bounced over the curbs through turn three, opening the door for the No. 20 Wright Motorsports Porsche (Heylen/Poordad) to slot into second position and attack Ellis for the lead.

Altoe and Braun recovered into fourth and fifth place respectively, with the No. 6 K-PAX Racing Lamborghini (Venturini/Lewis) making its way past the No. 88 Zelus Motorsport Lamborghini (Snow/Harward) and the No. 19 DXDT Racing Mercedes-AMG (Cooper/Vogel) to take the sixth spot.

Ellis and Heylen then proceeded to battle their way ahead of the pack and away from Dalziel and Altoe, engaged in their own battle for third, as well as a five-way battle for fifth place that lasted several rounds and saw both the No. 91 Rearden Racing Lamborghini (Kozarov/Burton) and the No. 93 Racers Edge Motorsports Acura (Abel/Hagler) enter the pits to handle some early issues.

At this point, the No. 3 K-PAX Racing Lamborghini (Caldarelli/Pepper) found itself at the back of the pack in 12th position.

The battle for the lead transformed into a four-way affair between Ellis, Heylen, Dalziel and Altoe all within under two-seconds from the top spot, with the lead position changing several times and constant pressure from any number of the challengers.

Caldarelli found pace and gained two positions from twelfth place to set the fastest lap at the time, indicating a possible end to the problems that had held the car to the middle of the pack.

Just in front of Caldarelli in the middle of the field, Cooper, Snow and the No. 96 Turner Motorsport BMW F13 M6 GT3 driver Robby Foley were in a close battle for seventh position, then occupied by Cooper.

After some time, the battle switched over to Caldarelli, now in ninth position overall and fourth in Pro Class with Foley losing some positions into 10th.

Abel returned into the mix after a long pit excursion but stayed behind Kozarov, who had been in and out of the pits for several laps.

Slowly and methodically, Caldarelli battled car after car, setting and re-setting Fast Laps on the race, finally settling into seventh place overall before the opening of the pit window.

At that point, the running order saw Heylen in front of Ellis and Altoe with Dalziel holding up fourth in front of Braun and Lewis. Cooper saw himself in eighth place, followed by Snow, Foley, Millroy, Grunewald, McMurry, Staveley and Abel who had finally run enough laps to overcome Kozarov’s time on the track.

At the close of the pit window dance and co-drivers on the track, the order for the top seven remained unchanged from the pit entry list, with Poordad in front in the No. 20 being challenged by Russell Ward in the No. 33.

After a few laps, Ward was able to overtake Poordad but immediately following the pass an incident with the No. 77 Compass Racing Acura NSX GT3 (Sales/McMurry) created a full-course yellow situation that bunched up the competitors and essentially reignited the battle for the top position with all the front-runners now in play.

When the green flag dropped, the competitors charged and without much advance warning, suddenly the existing points leaders K-PAX Racing, who had been plagued with issues keeping them in the middle of the pack, were now occupying the second and fourth positions on the track, with both closing in on leader Ward.

With less than 23 minutes to go in the race, Ward succumbed to the dual-pronged onslaught of the K-PAX Lamborghinis and found himself suddenly in third and Pepper in the No. 3 out in front. The battle to regain the top position continued for the remainder of the race but remained unchanged from that order until a white flag pass saw the No. 6 overtake its teammate and take the checkered flag first.

In the Pro-Am division, Kurtz had worked his way to the front and was defending against and onslaught of contenders in Poordad, Iribe, Harward, and Ghandour.

A miscalculation sent Harward spinning and ultimately took him out of contention, with Kurtz taking the class win, followed by Poordad and Iribe to complete the podium.