Hafertepe Leads Them All At Tri-City 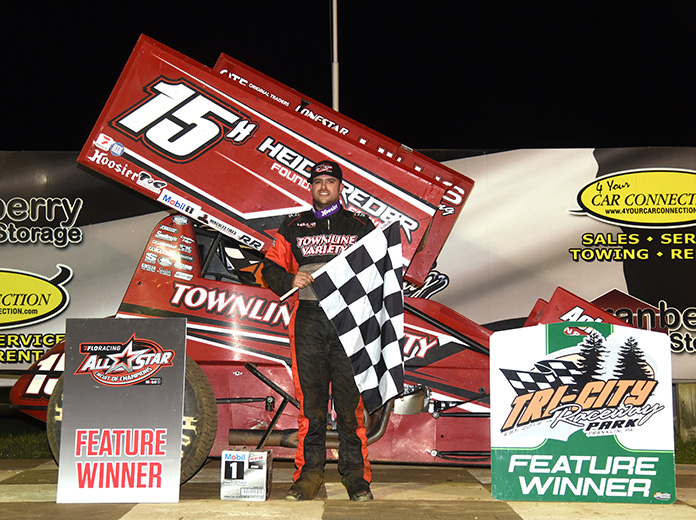 FRANKLIN, Pa. – Not only did Sam Hafertepe Jr. snap a FloRacing All Star Circuit of Champions presented by Mobil 1 winless streak that dates back to 2008 on Sunday at Tri-City Raceway Park, he earned some redemption in the process.

Hafertepe exchanged his mid-pack B-Main performance from Sharon Speedway on Saturday for a $6,000 victory at Tri-City Sunday evening.

Utilizing the pole position via dash victory, Hafertepe led all 25 circuits at the Franklin, Pa., venue. He was forced to outrun a trio of All Star championship contenders such as Justin Peck, Tyler Courtney and Ian Madsen.

Bumping his career All Star win total to two, Hafertepe’s last visit to victory lane with the series occurred at North Florida Speedway in 2008. Incidentally, that was his first win in a 410 sprint car.

“Being out front was the place to be tonight,” Hafertepe said. “It was obvious where we had to run to get around some of the tricky spots. After last night, we were really beating our heads off the wall, but to end things like this is pretty awesome for my guys.”

Mastering what proved to be a tricky and choppy racing surface, Hafertepe was rarely pressured during his 25-lap campaign, forced to deal with slower traffic on two occasions before cautions allowed for clean air and a clear track.

Even when traffic was a factor, Hafertepe maneuvered effortlessly, using the bottom and top grooves to keep from losing any momentum.

Buch Motorsports’ Justin Peck, who entered the evening as the All Star championship points leader, was probably Hafertepe’s biggest threat during the evening’s main event. The Sharon Speedway winner climbed from eighth to fourth in just two circuits, all before battling ahead two more positions by lap 17.

Unfortunately for Peck, a rut between turns one and two would get the best of him on lap 18, causing the No. 13 to lose control and tumble. Peck was uninjured.

After the red flag incident for Peck, Clauson Marshall Racing’s Tyler Courtney, who maintained the second position the entire distance before losing the spot to Peck on lap 17, would regain the runner-up spot, followed by Sam McGhee Motorsports’ Ian Madsen.

From that point forward, the top three remained the same. Hafertepe would go on to win by .528 seconds over Courtney, Madsen, Bill Balog and Cap Henry.

“We’ve been getting our butts beat with the Outlaws pretty good which forced us to make some big strides to get better,” Hafertepe said. “We decided to come up here and try our hand with these guys. We actually expected to come up here and get two slick tracks in a row, but the surface tonight threw us a curveball. Moisture is where we’ve been really good and tonight we were able to capitalize on that.”

With his podium finish, and Peck’s misfortune, Madsen is now the All Star championship points leader by ten markers over Peck.