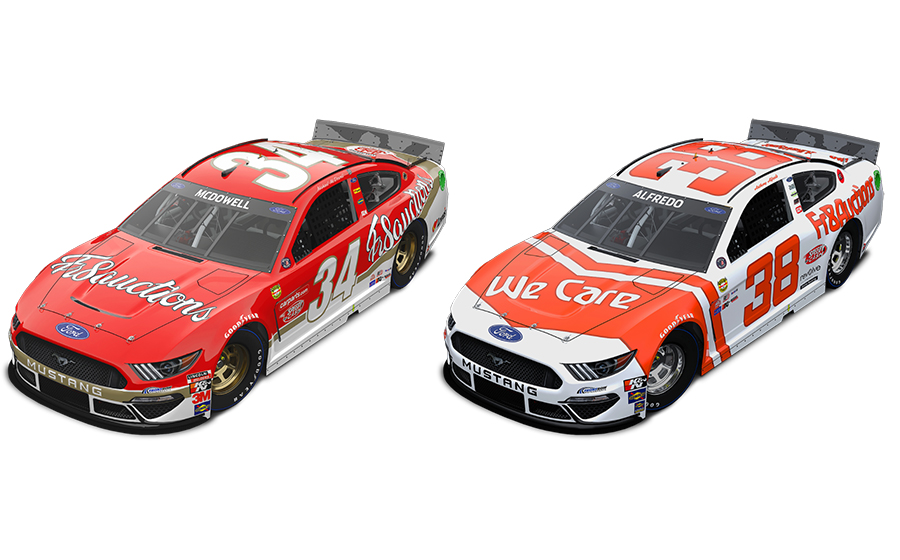 Reigning Daytona 500 champion Michael McDowell will race the No. 34 Fr8 Auctions Ford Mustang in the famous livery that led Bill Elliott to his first Daytona 500 win. Rookie Anthony Alfredo will race the 1985 No. 38 scheme that Alan Kulwicki raced during his first NASCAR Cup Series starts.

Fr8 Auctions will adorn the hoods and sides in the style and colors of the nostalgic 1985 scheme on McDowell’s No. 34. Elliott became a NASCAR superstar in this popular scheme. During the 1985 season, the Georgia-native earned 11 wins, 11 poles, the Winston Million and the Daytona 500 en route to a runner-up position in the championship and one of NASCAR’s most successful seasons.

The scheme was commissioned to SMD Designs to honor the Georgia Hall of Famer. Fr8 Auctions, headquartered in Georgia, is ready to bring the colors back to the track.

“It’s an honor to celebrate the Elliott family,” said Marcus Barela, owner of Fr8 Auctions. “As a Georgia-based company, we know first-hand the excitement and joy that Bill Elliott brought everyone in the state during his historical run in 1985. The scheme, today, is still one of the most iconic in the sport and the entire Elliott family continues to be great ambassadors for the sport. Bill won his first Daytona 500 in 1985, and with Michael winning his first Daytona 500 this year, it was a ‘gr8’ opportunity to celebrate this scheme. We can’t wait to see the car on the track and we hope the fans enjoy it with us.”

“This is an unbelievable car and a great honor to race the scheme that Bill Elliott made so famous and won his first Daytona 500 in,” said McDowell. “I can only hope to get another Daytona 500 victory and also win at Darlington Raceway like Bill did. But, I have to thank Fr8 Auctions for even allowing us this opportunity. We all want to make them proud this Sunday.”

The No. 38 Ford Mustang will carry the FRM We Care campaign on the hood with the support by Fr8 Auctions. The lettering, design and colors will match the No. 38 Ford Thunderbird raced by Kulwicki during three races in 1985. The starts helped launch Kulwicki’s championship career. Now, Alfredo, in his rookie season, will take to the track in a scheme replicating Kulwicki’s No. 38.

The We Care campaign was introduced by FRM in 2020 as a marketing initiative aimed at driving awareness for social responsibility for various causes. The We Care campaign began with a safe driving campaign in partnership with the National Road and Safety Foundation and continued with support of other organizations such as the Autism Society of America and others.

“It’s so cool to race an Alan Kulwicki scheme in my first NASCAR Throwback Weekend event,” said Alfredo. “And it’s even more cool that we’re doing it with our ‘We Care’ campaign. I really enjoyed working with Be Your Own Hero #BraveLikeWyatt Foundation earlier this year when we made the peanut butter donation to Canine Assistants. I have ideas, too, how we can further enhance our campaign to other organizations. So, it’s cool to see Fr8 Auctions help us get the campaign going again.”

More in this category: « Hard Charger: Bobby Unser Always A Fan Favorite Two More For Dotson During California IMCA Speedweek »
back to top