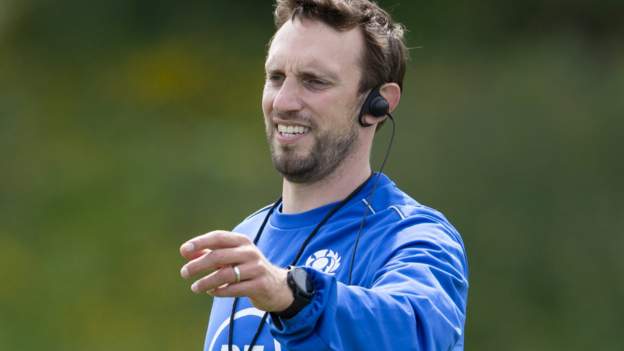 Blair says his main emotion is "pride" because of his attachment to the city.

"I've lived in Edinburgh most of my life, played 11 seasons at the club and still live in the city," he said.

"It's a really exciting squad. There's a good balance of experience and backgrounds and I'm looking forward to getting to know the players and their strengths better so we can mould that into making Edinburgh both good to watch and successful.

"It's also a really good time to come in with all the excitement around the launch of the new stadium this summer. It's a massive, watershed moment for the club."

Blair made more than 150 appearances for Edinburgh, also played for Newcastle Falcons and Brive, earned 85 caps for his country and toured with the British & Irish Lions in 2009.

He joined Glasgow Warriors as assistant coach in 2016 and operated in that capacity for club and country until 2019, after which he focused on national team matters.

Blair was due to be Scotland's interim head coach while Gregor Townsend toured with the British and Irish Lions this summer, only for the matches to be abandoned as Covid-19 affected the camp and that of their opponents.

Edinburgh managing director Douglas Struth added: "Not only does he bring that expertise, but Mike is also a local man, a club centurion and somebody who became a home-grown legend in an Edinburgh Rugby jersey.

"That's really important to us and is a fantastic illustration of our ambition to promote and develop local stars of the future.

"It's a new era for the club, with a new stadium and new tournament formats, and we believe Mike is the right man to continue the development of our tactical approach and winning mentality on the field."