Ryan Crouser: “I’d known the world record was possible since 2017” 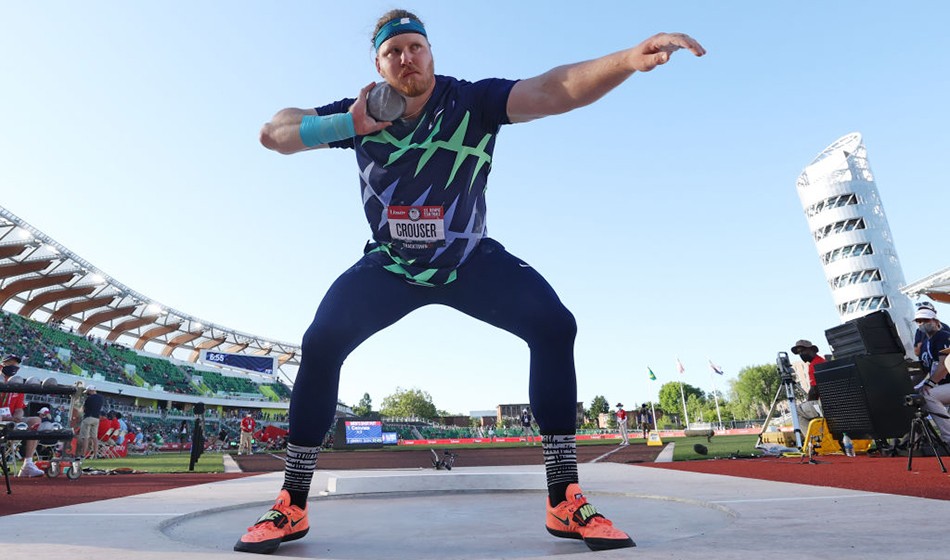 Shot put star on how it felt to finally set an outdoor world record, getting the sport out to new fans and goals for Tokyo

As preparation goes for an Olympic Games goes, a world record in your last event before flying off to Tokyo isn’t too bad.

That’s exactly what Ryan Crouser did at the US Olympic Trials, held in the American’s home state of Oregon in late June, when he threw an astonishing 23.37m at Hayward Field to beat Randy Barnes’ 23.12m from 1990.

There was an air of inevitability about it. Crouser has thrown half of the top 10 men’s shot put throws in history, he broke the world indoor record earlier this year and is the reigning Olympic champion.

The 28-year-old therefore goes into Tokyo as the favourite but the American isn’t getting drawn into complacency.

“I was able to execute the [world record] throw really well,” Crouser says. “In the early rounds, I knew that a first round throw would take me to the top three and then in round four I finally connected with a throw I’d been working towards for a long time and that was the world record.”

On possibly breaking his own world record in the Japanese capital, he adds: “The main thing at the Olympics or any major championships is winning. I do always want to go out there and compete against myself. When I was first going to my first major competition I was told that you should expect something to go wrong and that’s been a great quote that’s helped me get through my career.”

Crouser says that he has known the world record was “possible since 2017” as he had been nailing it in practice and in warm-ups but that never transcended to the competition.

“The greatest lesson that my sport has taught you is mostly setting goals and working hard for them,” he says. “It pays off but not when you want to necessarily and when you think it’s kind of all there and ready to go it will blow up in your face.

“The world record for me was a reflection of that. I’ve known it was possible since 2017 and I went into meets expecting to break it and I didn’t between six and eight occasions.”

While his family won’t be able to travel to Japan to watch Crouser perform, his dad, who doubles up as his coach, will be able to do so. First Lady Jill Biden is also expected to watch the athletics when it kicks off on Friday, with the men’s shot put qualifying round on August 3 followed by the final on August 5.

“The rest of the family aren’t going and it’s sad for them as they’re missing out on the whole Olympic experience but as an athlete you’re in a bubble. I won’t know that they’re not there. It’ll be nice to have some people supporting us. The whole country will be back at home watching and it’s an honour to have the First Lady with us,” the 28-year-old says.

With millions of people tuning in on TV, many potentially for the first time, Crouser is also keen to engage new fans and offers perspective on what it’s like to throw a shot put.

“Go to the bowling alley and pick up a bowling ball, a 16lb ball and then go to the basketball court and stand on the free throw line and turn around and make a three quarter court shot with that bowling ball,” he explains.

“If you did that then you wouldn’t break the world record but you would’ve been close to medalling at Doha. That puts it into perspective what we’re doing. We’re big guys, everyone is over 300lb, we’re strong, we move well and we’re generating a ton of force. It’s an intense event, it’s easy to follow and you can see where the world record is and what we’re trying to get.”

Crouser’s greatest competition will most likely come from New Zealander Tom Walsh, whose personal best is 22.90m and American team-mate Joe Kovacs, who beat Crouser to world gold in Doha and has thrown a best of 22.91m.

“I elected to not do any meets between the trials and the Olympics as I want to perform my best in Tokyo. I feel like I’ve laid a foundation at the US Trials and am happy where I’m at and excited to see what I can do in Japan,” Crouser adds.

“You want to throw a personal record but you have to be better than that to do it. It’s not optimal. You go out and warm up at a facility that’s separate, walk or take a bus to a holding room and then after you’ve sat down for 40 minutes you go out on the field. It’s a fair competition on that day and I’m trying to throw the best that I can possibly can.”

The gauntlet was thrown down at the US Olympic Trials and the men’s shot put could well be one of the standout events in Tokyo.