From Atlanta to Tokyo, Olufunke Oshonaike joins the seven club 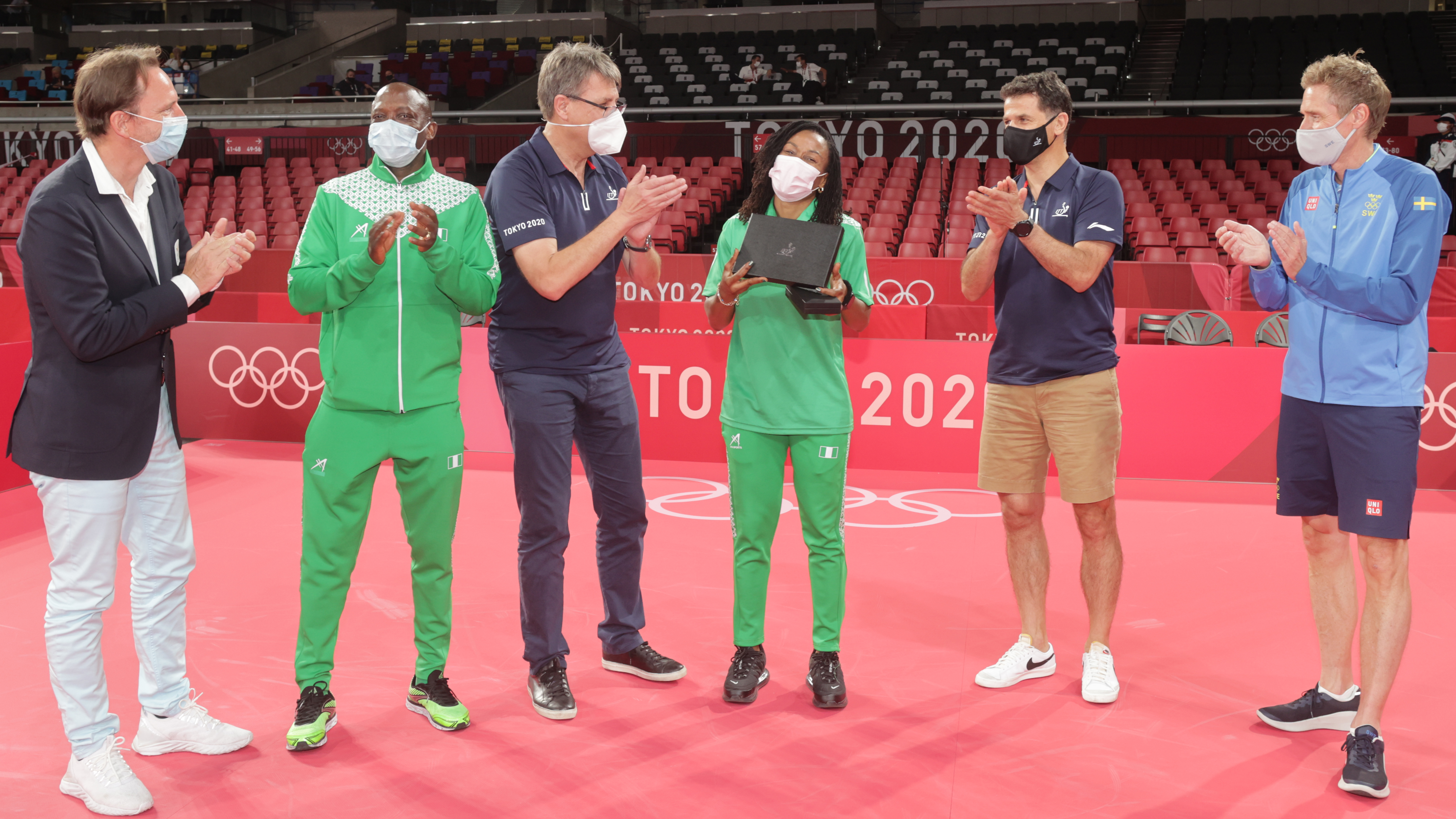 In Japan’s capital city, she became the first woman to compete in the table tennis events in seven Olympic Games, the occasion being marked by a presentation held in the Metropolitan Gymnasium on Monday 26th July.

Present for the occasion was compatriot Segun Toriola, Belgium’s Jean-Michel Saive, Croatia’s Zoran Primorac and Sweden’s Jörgen Persson, all players who have plied their skills in seven Olympic Games. The award was presented by Thomas Weikert, ITTF President.

Competing in the Olympic Games has been a major challenge, most certainly Olufunke Oshonaike, a lady with a most outgoing personality, has lined up in the presence of illustrious company.

In 1996 in Atlanta, she finished in fourth place in her initial phase group behind DPR Korea’s Kim Hyon Hui, Germany’s Jie Schöpp and Russia’s Elena Timina. Four years later, when the initial phase was also organised in the group format, she finished next in line to Japan’s Rinko Sakata and Australia’s Miao Miao.

Later at the Athens 2004 Olympic Games, the group stage had been disbanded, it was knock-out from the very start. Notably she beat Chilean pen-holder Berta Rodriguez before losing to Hungary’s highly talented Krisztina Toth.

Four years later in Beijing, Olufunke Oshonaike did not compete in the women’s singles but was on women’s team duty alongside Bose Kaffo and Cecilia Offiong; fourth position in the group phase was the outcome.

Fast forward to London in 2012, it back to women’s singles duty. She accounted for Iran’s Neda Shahsavari, prior to experiencing defeat at the hands of Italy’s Wenling Tan Monfardini.

A most creditable performance in England’s capital city, it was the same in 2016 in Rio de Janeiro. She overcame Lebanon’s Mariana Sahakian, before Puerto Rico’s Adriana Diaz ended adventures.

Alas in Tokyo it was a preliminary round exit, beaten by Liu Juan of the United States.

Nevertheless, Olufunke Oshonaike was not down hearted.

“I played good, I had some problems with my left leg, but she was better than me; I’m so happy to be playing in the Olympics again. I lost, it’s sad but to be competing to see all the athletes happy, it’s something that’s hard to describe.” Olufunke Oshonaike

Does an eighth appearance beckon? Olufunke Oshonaike may be present in Paris in 2024 but she was crystal clear, as a spectator, not player!