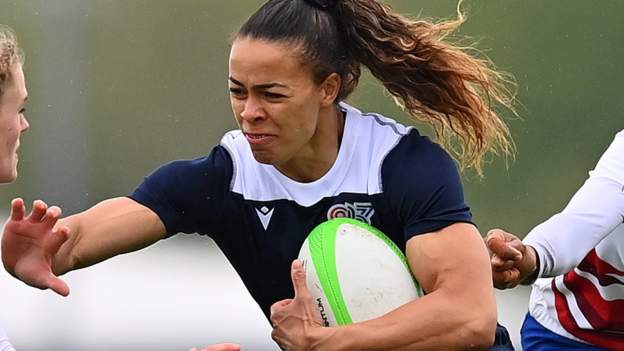 "I used to train in B&Q's car park - that was our training ground in the winter as all the fields were too wet," recalls Deborah Fleming as she prepares for her Olympic debut.

The 30-year-old is part of Team GB's women's rugby sevens squad that will hope to improve on the fourth place they achieved on the sport's debut in Rio five years ago.

Fleming is a latecomer to the sport, having switched from athletics at the age of 21 after attending a Team GB talent-spotting event.

And that unusual athletics training while growing up in Gulval, just outside Penzance in west Cornwall, stood her in good stead for the dedication needed to be an Olympic athlete.

"My dad would park up, turn on the car lights and that's how we did the sessions, it was lamppost to lamppost," she told BBC Radio Cornwall.

"I'd do tyre drags up a hill. My dad went to one of his friends that used to own a garage, got an old car tyre and a bit of rope and used to strap it around my waist like sled running.

"My dad came up with quite a few ideas that were really good, and it's quite interesting that now as an elite athlete, we do the same sort of training sessions, but obviously we've got the technology to go alongside it."

Those humble beginnings nurtured a burning desire to represent her country at sport, something Fleming says an old primary school teacher reminded her about when they met up recently.

"I wasn't doing any sports properly or anything like that and I hadn't started this journey that I've been on, so it was really interesting to know that right from a young age, it was innate in me that I wanted to represent my country," she added.

"For me, the idea of training hard and the discipline to do that isn't something that's overwhelming, I enjoy it and I want to do it because it's the little sacrifices you make for that end goal."

Since switching to rugby sevens Fleming's career has blossomed - as well as playing club rugby for former Premier 15s champions Saracens, she won Commonwealth Games bronze with the England sevens side and was England sevens' top scorer in the 2019-20 World Series with 11 tries.

"To be part of Team GB is an amazing thing to be," she said as she prepared to join up with team-mates from Wales and Scotland as well as England.

"We've become a bit of a hybrid and people aren't too sure how you're going to play.

"Fortunately for us all the other nations remain the same, so I suppose we have a bit of an upper hand there as we're still able to analyse them and take what we've learnt from playing against them and put it together.

"Whereas I suppose there's a little bit of the unknown with Team GB, which makes it even more special as you get to come together with players you wouldn't normally play with."