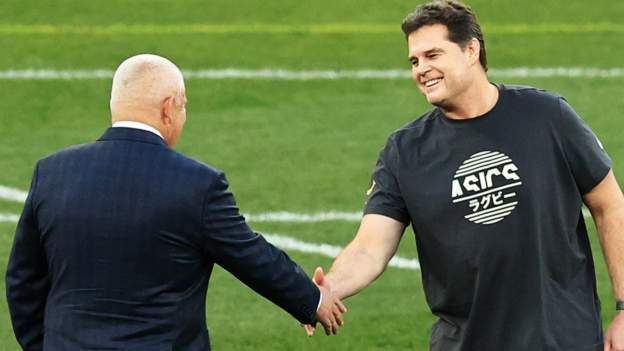 Springboks director of rugby Rassie Erasmus says he was "baffled" by the appointment of Marius Jonker as the Television Match Official for the first Test with the British and Irish Lions.

The Lions were critical of the decision to appoint the South African as TMO.

Jonker had to rule on several tricky decisions as the Lions won 22-17.

Erasmus said he is "close, close friends with Marius", adding he did not phone him before the game because it was "such a tough thing for him to do".

"I was baffled when Marius was appointed as the TMO," added Erasmus.

"But when he was mentioned because he is South African, and how he is refereeing his team, that didn't sit well with me to be honest with you.

South Africa must win the second Test on Saturday in order to remain in the series and instead of the build-up being focused on that, it has instead been on Erasmus' supposed Twitter antics.

The 48-year-old has been accused of setting up a fake profile under the name Jaco Johan on the social media site - the account has been critical of refereeing decisions from the first Test.

"No I am actually not Jaco Johan. I actually follow Jaco - he is a big supporter of us and he's been feeding me some really good clips for a while now. Some really good things that I have used in the past," Erasmus added.

Lions boss Gatland, who is not on social media, was also quizzed about the account but dismissed the question.

"I just think it's a bit of a separate sideshow," he said. "I haven't really taken much notice of it - the focus has been on ourselves."

Both sides announced their matchday squads for the second Test on Tuesday with three changes apiece to their starting XV's.