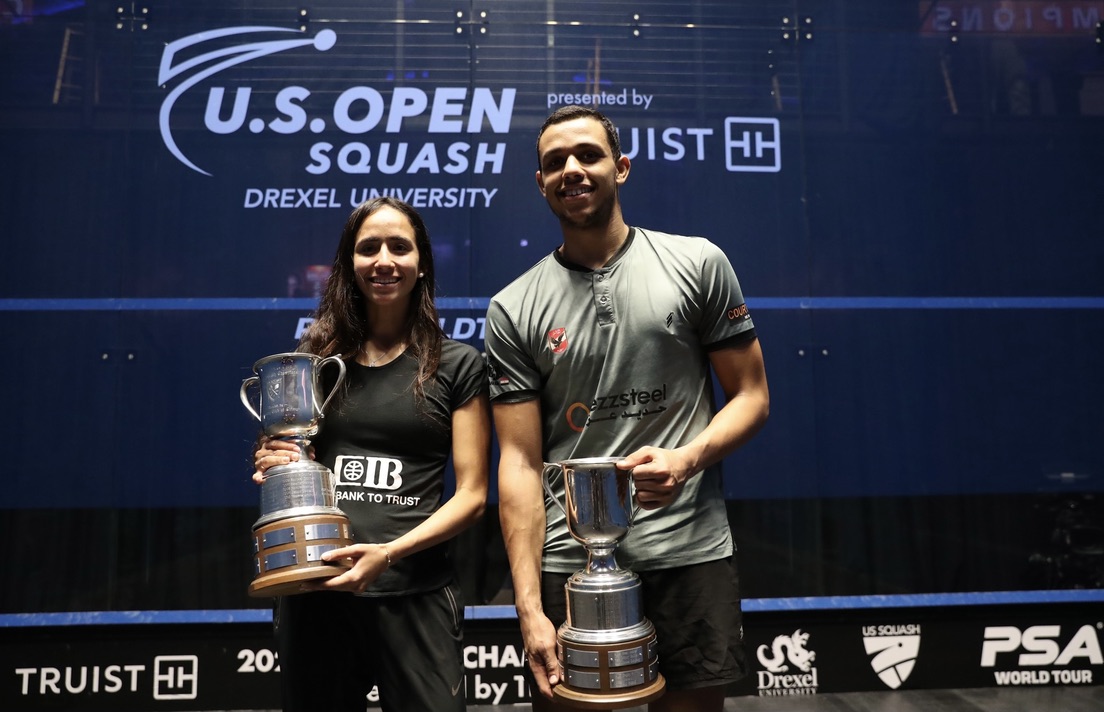 Egyptian duo Mostafa Asal and Nouran Gohar are the 2021 U.S. Open champions, signifying a possible changing of the guard at the top of the game.

Gohar has already reached the peak of the sport but is now keen to cement her place as the leading female player in squash.

Asal, meanwhile, is winning fans and enemies in almost equal measure as he barnstorms his way through the male rankings on an upward trajectory that could also see him reach the top by next year.

In a now customary display of Egyyptian dominance, they overcame compatriots Tarek Momen and Hania El Hammamy on a thrilling finals night at Philadelphia’s Arlen Specter US Squash Center.

This was the first instalment of the US Open, presented by Truist, in luxurious new surroundings in Philadelphia. Apart from lighting issues on the court, the event can be quantified as an outstanding success.

The 20-year-old Asal became the youngest ever U.S. Open champion after launching a monumental comeback from two games down to capture his first PSA World Tour Platinum title.

It brought to an end a gruelling tournament for Asal, who battled through a 103-minute clash with world No.3 Paul Coll in the quarter finals, a 96-minute humdinger with Diego Elias in the semi finals, and a 91-minute title decider with Momen.

World No.10 Asal was second best for the first two games but found a new lease of life in the third and fourth games to draw level, overturning a championship ball in the latter. Asal’s mental strength was unwavering in the decider as he retrieved ball after ball to claim a stunning victory 5-11, 5-11, 11-9, 12-10, 11-3.

“I don’t believe the feeling,” said Asal after his sixth PSA title. “I have all the respect for Tarek. He was 2-0 up and I think it was a great battle today. I’ve been having so many 3-2s in the last couple of days and I cannot believe it until now. I was having problems before the tournament, whether I would enter or if I couldn’t, but I managed to win the title.

“I want to thank everyone, my coaches, my physios, mentally for me to be able to recover after all of these matches is something unbelievable. Lastly, I want to thank US Squash and the PSA, Lee Beachill [PSA Chief Operating Officer] and everyone behind this tournament. Thank you guys for having us again and I can’t wait for the next event for this tournament.”

Hammamy had beaten top seed Nour El Sherbini in the semi-finals, while Gohar ended the run of crowd favourite Olivia Fiechter, who had claimed her own moment in the spotlight by removing US number one Amanda Sobhy and Belgium’s Nele Gilis to reach the last four.

Gohar, who overturned a 2-0 deficit and a match ball against compatriot Nour El Tayeb to win the 2019 U.S. Open, found herself a game down and 9-4 behind after a rampant start from her opponent.

But a change in tactic from the 24-year-old saw her go on the offensive, and the momentum shifted in Gohar’s favour as she moved on to claim a seventh successive win over El Hammamy. It is Gohar’s second successive Platinum title after winning the CIB Egyptian Open in September and her 12th PSA title overall.

“I can’t really believe it, but it seems like I have to always be down in the final of the U.S. Open,” said Gohar afterwards.

“Last year I was match ball down, this year thankfully I was only 1-0 and 9-4 down. I just wanted to stick around most of the time, and I’m just glad with the way I dealt with it. I felt I was the most experienced today, so that made a huge difference.

“I’ve been in these situations before against the top players. I think what made the difference is that I just wanted to stick to my game plan and adapt a little bit.

“I played better, I thought about it more and that made the difference today. I think many matches, many losses, were in the back of my mind, so I just took the experience and was trying to execute it today.”

Gohar and Asal each take home $19,000 in prize money for their efforts in Philadelphia this week, while Asal joins Gohar and Ali Farag in qualifying for the season-ending CIB PSA World Tour Finals, which will take place in Cairo in June, 2022.

More in this category: « - Paul Coll breaks his duck against Mostafa Asal to reach Qatar final »
back to top