‘You could hold a tournament on this steel court,’ says Mohamed ElShorbagy 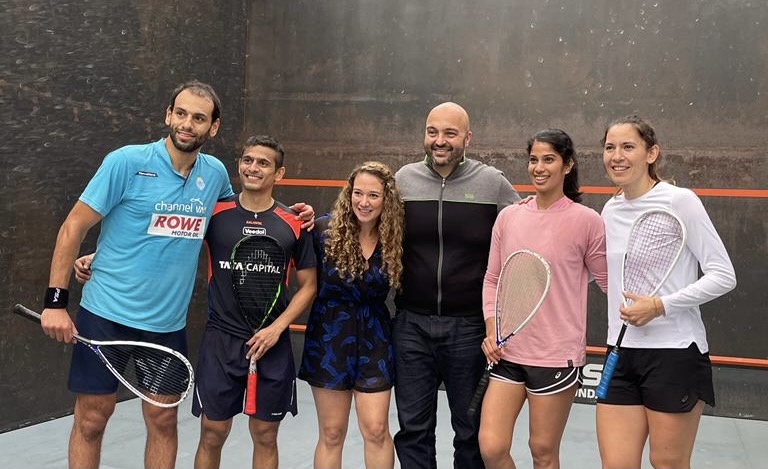 Outdoor squash was top of the agenda as many of the world’s leading professionals took to the court to support the 20th anniversary edition of World Squash Day on Saturday (October 9).

After a mixture of singles and doubles, the players were full of praise for the way the court played and offered their backing to ideas for similar outdoor courts to make the game more visible, affordable and accessible.

Ghosal said: “We didn’t know what to expect in advance, because we’ve never seen anything like this, but we were all pleasantly surprised. This is a nice court, it plays superbly, and we need to thank those responsible for making it happen.”

ElShorbagy added: “Like Saurav said, we did not know what to expect but you could actually play a tournament on this court.”

The crowd laughed when he joked: “The difference is when you play on a glass court in the morning you can’t see the ball, but on this court you can!

“Thanks to everyone who had this idea and worked so hard to make it happen. It’s a unique court. What a great occasion, to have this on World Squash Day, and developments like this mean a lot to the players.”

Joelle King said: “Making outdoor courts available to the general public is such a wonderful idea, and we all love anything that can help bring the sport to new audiences.”

Joshna Chinappa, a gold medal winner in the 2014 Commonwealth Games women’s doubles with Dipika Pallikal, added: “It was great to play mixed doubles on World Squash Day. We should do more exhibition doubles – it’s really fun for the spectators and us!”

Master of ceremonies Will Carlin, a familiar face at major events in the USA, said: “From my standpoint, I thought the whole day was terrific. From working with and seeing the SquashHaven kids have fun with all four of the pros on court, to the receptive and entertained crowd of squash buffs and squash newcomers, it was an enjoyable way to celebrate World Squash Day. I was proud to be a part of it.”

For squash to move forward, making our sport more visible, more accessible and more affordable has to be a priority. We are talking about outdoor courts. Some of the world's top pros were like kids again as they enjoyed playing on the Maspeth steel court in NYC on @WorldSquashDay pic.twitter.com/0Ouse6HEsp

Adriana Olaya from the PSA Foundation told guests at courtside: “Jeff Anschlowar and Robert Gibralter were the visionaries who had the idea to create this really cool place.

“This is the future of squash: outdoor courts in urban locations, and inclusive for everyone to come and play. This is what we want.

“Our thanks go to these amazing pros who have come here to support the project and help us to gain more visibility for outdoor squash.

“This is just the beginning of what we want to do with the PSA Foundation. We currently support 11 outreach projects in different countries, and we have different outdoor court projects all over the world helping the game to grow.”

Elsewhere in the Big Apple, the Open Squash club chose World Squash Day to hold a tournament for players from across the city to celebrate their rebranding from the Manhattan Community Squash Center.

Spokesman Cleve Miller revealed: “The name Open Squash better captures our mission of making squash accessible to all and ‘open’ to everyone. We’re open to everyone in every community.”

As well as announcing a subsidized membership scheme to make squash affordable to those on lower incomes, Open Squash also confirmed that former Harvard scholars Ali Farag and Georgina Kennedy would act as touring professionals and community ambassadors.

The club added: “Open Squash’s mission is to grow the sport and make squash accessible to everyone – at every level and from all walks of life. We’re thrilled to announce our new Open SquashTouring Pro Program.

“The goal is to provide support to touring squash professionals who want to give back to the sport by participating with Open Squash in programming designed to create a thriving squash community that is open to all.

“Not much needs to be said about Ali’s place in the sport; he’s World #1 and already has a place in history as one of the all-time greats. We feel incredibly lucky that he believes deeply in our mission of broadening access to the sport and is excited to join our community and help drive the mission forward.

“Gina is just starting her PSA career after a ridiculously successful college career. Gina has already posted some impressive PSA tour victories. We have high hopes for her pro career and wish her every success.

“But just as important, Gina, like Ali, is excited to become part of our community and is committed to our goal of growing and opening up squash for all.

“Ali and Gina have committed to visiting Open Squash whenever they can and participating in our programming. Ali and Gina will be promoting the Open Squash brand by wearing it on their shirts when they are competing in tournaments. Additionally, Gina will be with us for at least two weeks during the summers to be a lead pro at our summer camps.”

England’s world No.7 Sarah-Jane Perry endured a nailbiting journey home from competing in the US Open to reach Birmingham in time to support World Squash Day.

She had to switch her transatlantic flight from Philadelphia to New York and made it back home just in time to join England team-mate Alison Waters to welcome newcomers on the glass mini court set up at the University of Birmingham Sports Centre, which will be the host venue for next year’s Commonwealth Games.

Sarah also teamed up with the Commonwealth Games mascot, also called Perry, for some fun on the mini court.

Further south in England, brothers Joe and Charlie Lee joined Jasmine Hutton and Emily Whitlock on court for a fun mixture of coaching and exhibition play at Reigate Squash Club.

More in this category: « - Paul Coll breaks his duck against Mostafa Asal to reach Qatar final »
back to top