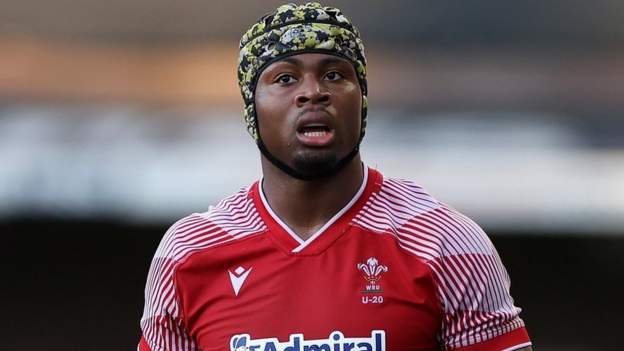 Wasps flanker Thomas Young, who joins Cardiff next season, is available after being given special permission despite the Welsh Rugby Union's 60-cap rule.

Cardiff flanker Ellis Jenkins, who last featured for Wales in November 2018, is also in the 38-man squad.

Fly-half Gareth Anscombe is back after two years out through injury while Rhys Priestland also returns.

Like the other English-based players in the squad, Tshiunza cannot play against New Zealand on 30 October because the game falls outside the international window.

But he is in contention for the Tests in November against South Africa, Fiji and Australia.

Tshiunza is from a French family and lived in DR Congo until he was six. His family initially settled in England before moving to Wales in 2010.

He came through the Cardiff pathway before moving to Exeter, where he went to university. Tshiunza has pledged his allegiance to Wales, making his debut for their under-20s earlier this year, and has played four games for Exeter this season and is seen as a lock and a flanker.

Tshiunza was given the news on the day he was selected to play for Exeter University against Cardiff University.

"In the selection, we're looking at the here and now obviously but also at Rugby World Cup 2023," said Pivac.

"In Christ, we've got a young man who is a great athlete. He's got a good skill set on him but lacks game time in senior rugby.

"He's in a good place at Exeter in terms of working under Rob Baxter and what's going on there. He's one we believe is a six going forward and can also cover second-row.

"He brings something nobody else in the country probably has in terms of height and athleticism.

"It's getting him involved now for his development. Whether he plays rugby in this series, time will tell. We want to get him in, around the senior players and in the environment."

Scarlets prop WillGriff John is the only other uncapped player.

Young is selected after a two-year absence after it was announced earlier on Wednesday he would be rejoining Cardiff for the 2022-23 season and he has become available immediately for Wales.

The WRU introduced a policy in 2017 called the Senior Player Selection Policy (SPSP) that deemed if you committed to playing for a club outside of Wales and had fewer than 60 international caps, you were ineligible for the national side.

There has been one exception for a player who indicated he was returning to a Welsh region the following season.

Scrum-half Rhys Webb was allowed back into the international fold for the 2020 Six Nations when he announced he was returning to Ospreys from Toulon for the 2020-21 season.

A similar move to allow Priestland to play for Wales last season, after it had been announced he was linking up with Cardiff from Bath, was rejected.

Priestland, 34, who played the last of his 50 internationals against New Zealand in 2017, was eligible for selection again after returning from Bath to Cardiff.

Cardiff fly-half Jarrod Evans has not been included after suffering a sternum injury against Connacht in late September.

Wales coach Wayne Pivac has named four fly-halves in his squad with Priestland and Anscombe joined by Northampton's Dan Biggar and Bristol fly-half Callum Sheedy, who are unavailable for the opening game against New Zealand.

Young, Louis Rees-Zammit, Taulupe Faletau and Nick Tompkins are also unavailable because the All Blacks English clubs will not release players.

Welsh fans will be glad to see Jenkins and Anscombe return to the international stage after long-term fitness problems.

Jenkins suffered a serious knee injury against South Africa in November 2018 and was ruled out of rugby for two years.

Anscombe was missing for a similar amount of time after getting injured playing for Wales against England in August 2019. He has returned this season and regularly started games for Ospreys.

Scarlets full-back Liam Williams is a doubt for the All Blacks match after having his appendix removed.

There is no room for Cardiff full-back Hallam Amos or in-form Dragons wing Jonah Holmes, with Johnny McNicholl preferred.

Scarlets centre Johnny Williams is named after only just returning from a six-month lay-off with a shoulder injury but there is no call-up for regional team-mate Scott Williams.

Navidi was the latest casualty after suffering a shoulder injury while playing for Cardiff against Bulls last weekend.

"We understand the opening game against the All Blacks is outside of the international window but I believe that we all need this game, after what has been a particularly difficult time for everyone because of the global pandemic," said Pivac.

"This has been one of the most difficult selections I've had to make with less rugby than would have normally taken place ahead of a campaign, in addition to injuries and player unavailability.

"When you look at selection you want to select in-form players but it's fair to say that a number of players haven't hit their top form. We have looked at past performances at this level, including a successful Six Nations campaign, and we've cross-credit some of that information into current form if you like.

"Injuries in certain positions, particularly at openside, have forced us to look a little bit deeper than we would normally but what it does mean is that more players have an opportunity to be exposed to this level of rugby. This can only be a good thing as we continue our preparations for the 2023 World Cup."