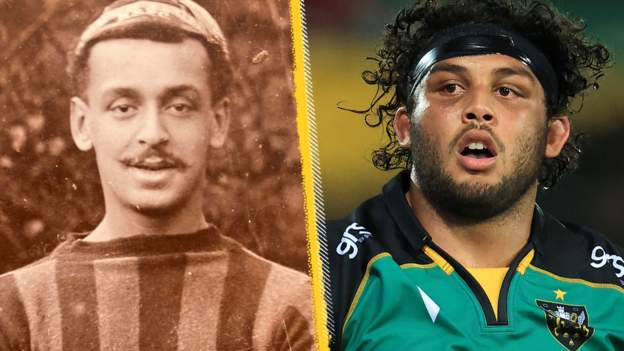 "You won't have heard of Frank Anderson before, but I hope we're going to put that right."

His inspirational story is now told in schools.

However, nothing was known about the first black or mixed-race Northampton Saints player. Until now.

A discovery by BBC Radio Northampton's sports editor Graham McKechnie, while looking through some old team photos, led him to Frank Anderson.

And together with England back-row forward Lewis Ludlam - who describes himself as Saints' first mixed-race club captain - they have pieced together Anderson's extraordinary story of breaking boundaries through rugby union and war, despite a life of poverty.

Anderson's rugby career was relatively modest on the face of it, but he made history that remained undiscovered for more than 120 years.

Born in 1878, he made his Saints debut 22 years later, making nine first-team appearances in all, and was vice-captain and secretary of the club's reserves.

Like most of his team-mates, he worked as a shoemaker.

"Their ordinary lives were punctuated by what happened on a Saturday afternoon - amateur rugby players, who on a Saturday stepped out of the ordinary, pulled on the black, green and gold and played for Saints," said McKechnie, who commentates on the Saints and is also the club's historian.

By the time World War One came around Anderson was 37,, but rather than joining his local Northamptonshire Regiment he became part of the 17th Middlesex Regiment, known as the Footballers' Battalion.

"It's an incredible story really that these two figures of black sport in Northampton served together - it's an unbelievable untold story," McKechnie said.

Having been promoted to corporal, Anderson was wounded in Delville Wood, during the Battle of the Somme in July 1916, and awarded a military medal for bravery in the field three months later.

"It was unquestionably a racist world and the institutions, including the army, were literally institutionally racist, they would bar men of colour from positions of responsibility," added McKechnie.

"But within those institutions there were men which saw past it, which I think you'd see with Walter Tull and Frank Anderson - people saw past their colour and saw them as leaders and good soldiers."

Anderson did not leave the line but his war was ended in November 1917 when broken ribs forced him home, and he returned to working in a shoe factory until dying of acute tuberculosis on 4 July 1921, aged 42.

For 25-year-old Ludlam, whose mother's family come from Guyana and father's from Palestine and Lebanon, it is a particularly poignant tale.

"Trying to get a picture of what it was like being a mixed-race person growing up in that time - it's almost impossible to say but it looks from everything we've seen, it doesn't seem like Frank was outside the pack.

"If anyone deserves to be remembered it's him, for what he did and what he represents."

Anderson is laid to rest in a communal grave in north London, with no fanfare or acknowledgement of his achievements.

"It's extremely sad for a man like Frank, what he went through, not to get any recognition and to end up in a communal grave like this is quite a sad end and eye-opening," added Ludlam, who has 10 Test caps.

"It's just a shame that that story isn't as well-known as it should be."

There is at least some form of happy ending to this previously undiscovered story.

BBC Radio Northampton managed to track down Anderson's great-grandson Martin Faulkner, who lives in nearby Wellingborough with his family, to see how much he knew of his life.

"I knew that he was mixed-race but as far as him being a Saints player was concerned, I didn't have a clue," he said.

"Walter Tull is an icon at the Cobblers ground, so to think my great-grandfather was actually pals with him is brilliant.

"For someone like Frank to, if you like, stick his neck out at that time and make a name for himself, it's just made me so proud and it makes me emotional."

Faulkner was presented with a Saints shirt by Ludlam before a recent game at Franklin's Gardens, with Anderson's name and legacy number (166) printed on the back.

With people now being made aware of Anderson's story, there are plans for it to be taught in local schools in the same way that Tull's tale has been told.

"It's an amazing story and I've been blown away by what I've learned," said Ludlam.

"Before this week I hadn't given black history a massive amount of thought - obviously I was aware of it, but actually uncovering a story like Frank's has really shown me the importance of it and how it can be really relevant and used to inspire a generation."