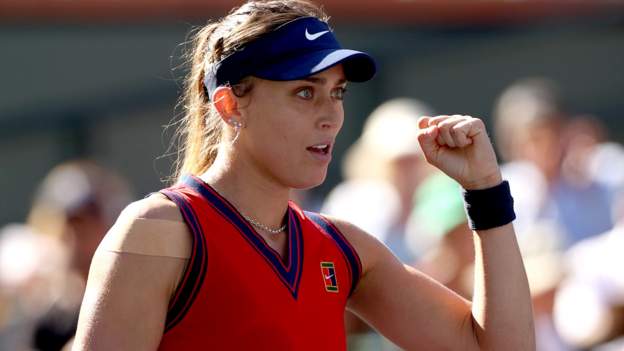 Spain's Paula Badosa beat Victoria Azarenka in a lengthy and entertaining final to win the prestigious Indian Wells title on her tournament debut.

It is the 23-year-old's second WTA tour title after May's Belgrade victory.

Belarusian Azarenka, 32, served for the match at 5-4 in the deciding set before Badosa wrestled back control.

The former world number one was aiming to become the first woman to win the tournament three times.

But world number 27 Badosa proved too strong as she added to her shock semi-final victory against Ons Jabeur.

It was a closely-fought match from the outset as Azarenka repeatedly found a way to return what should have been winners.

Badosa eventually closed out the first set with a cross-court backhand but world number 32 Azarenka - who won Indian Wells in 2012 and 2016 - raised her level to dominate the second set.

It looked as if Badosa had quelled Azarenka's attack as she went 2-0 up in the decider but two double faults in a game allowed Azarenka to get things back on serve.

Two-time Australian Open champion Azarenka was poised to snatch victory when she broke to go 5-4 up, before Badosa broke back and bulldozed her way through the final tie-breaker.