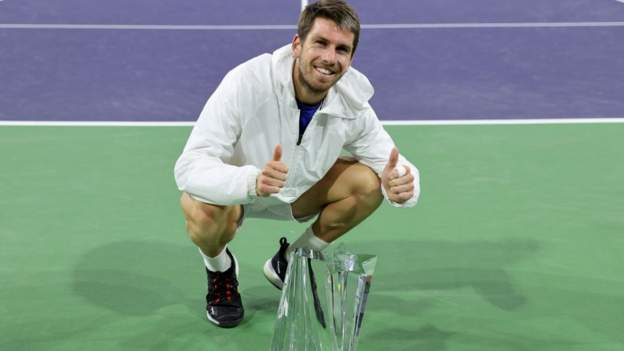 Cameron Norrie's Indian Wells victory was already remarkable enough without his revelation that his shoes had gone missing before the final and he had to wear new ones.

The 26-year-old became the first Briton to win the prestigious Masters 1,000 event in California with a 3-6 6-4 6-1 victory over Georgia's Nikolocz Basilashvili.

But his preparations were derailed when - rather like what happened to compatriot Andy Murray earlier in the tournament - his footwear vanished.

"Every day I left my shoes on top of the locker. I think someone, I don't know who it was, maybe someone from the cleaners or something last night, came through and they threw the three pairs of shoes that I had away," he told a news conference.

"I looked all day. I had everyone looking. I don't know what the people have against the Brits with stealing the shoes, but I didn't manage to get them back.

"Yeah, it was just difficult. Luckily, I didn't have a wedding ring attached [unlike Murray]," he added.

He said the shoes had been on his mind during what was the biggest final of his life.

"You don't want to be thinking about your shoes," he said. "At one point I said, 'All right, these are the shoes I got, I'm just going to focus on what I can control right now. I wore them in a little bit, came good in the end."

Norrie had trailed by a set and a break before turning the match around but he did not think that was because of the trainer issue.

His stunning victory at one of the sport's most high-profile tournaments comes in a remarkable year for Norrie, who has become the British number one and risen to a career-high ranking of 16th in the world.

In 2021 he has reached six finals and is now in with a chance of qualifying for the elite season-ending ATP Finals, which features the year's eight leading men.

This victory puts him in 10th place in the race to Turin and just 115 points behind ninth-placed Hubert Hurkacz. Eighth-placed Rafael Nadal is not playing again this season, which means that ninth place will qualify.

That goal is one Norrie now has in his sights, even if it seemed unlikely at the start of the year when he was ranked 74th.

"I think even being in the conversation this late in the year with, what, four tournaments left after this, I think that's impressive for me," he said.

"If you would have told me before the year that would be the case, I would have been happy. I think that's a lot of good progression.

"[Next] I'm playing Vienna, Paris and Stockholm. It would be nice to make it, but I'm going to keep going, keep taking care of what I can and handling what I can."