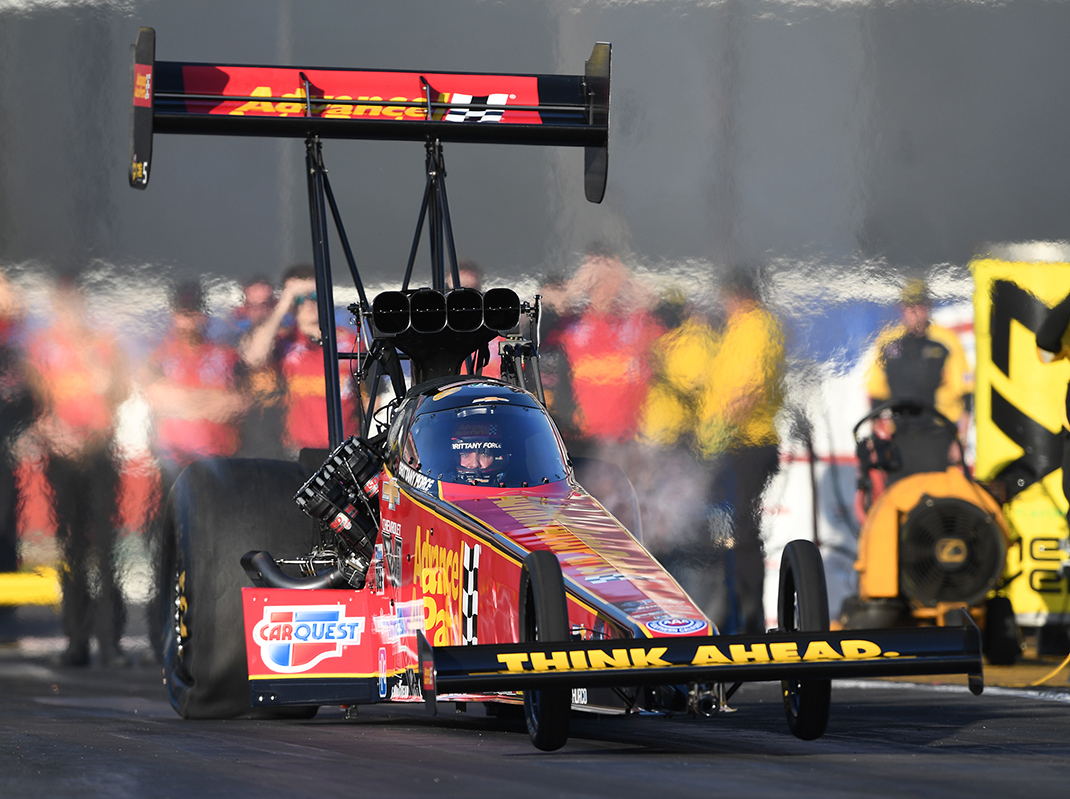 BAYTOWN, Texas – Last year, Houston Raceway Park powered by Pennzoil was the site of one of Brittany Force’s most triumphant moments in her standout career, as the 2017 Top Fuel world champ returned from a season-opening crash in Pomona to win in Houston just two months later.

It was a special moment for Force and she will look to add another in her 10,000-horsepower Advance Auto Parts Dragster at this weekend’s 32nd annual Mopar Express Lane NHRA SpringNationals presented by Pennzoil. After racing to a runner-up finish on Sunday in Vegas, Force has momentum heading into the back-to-back NHRA Mello Yello Drag Racing Series race weekend, and she is thrilled to again try to take advantage in Houston.

“I’m excited to get to the back-to-back races,” said Force, who has eight career wins. “For me as a driver it puts me at ease. You haven’t been out of the seat too long and you jump right back into it, back into your routine, so I’m excited to get to Houston. Houston is a special place for me. We won there last year so I’m ready to get there. We really turned things around and stepped things up in Vegas so we should be looking good if we get some good qualifying passes in. I want to go out there on race day and win.”

Force (Top Fuel) and J.R. Todd (Funny Car) were last year’s winners of the event, which will include live finals coverage on FOX starting at 3 p.m. (ET) on Sunday. It marks the NHRA’s season debut on FOX and is the fifth of 24 races this year.

For Force, things have come together quickly with a new team and after the result in Vegas, the former world champion may be ahead of schedule as she competes for a second world title.

The John Force Racing Top Fuel team added crew chiefs David Grubnic and Mac Savage into the mix in 2019, and the potential has already been obvious. After a slow start to the season, Force came alive in Gainesville, qualifying No. 1 with a 3.680-second pass at 326.32 mph and picking up her first round win of the year. She qualified third last weekend in the four-wide racing event in Vegas, winning her first two quads to advance to the final round. She went 3.810 seconds, falling to Mike Salinas, but the team accomplished a great deal as it moves into position for its first win of 2019.

“Coming into this season we’ve had big changes with a new team, new crew chiefs David Grubnic and Mac Savage and a new group of guys,” said Force, who jumped to eighth in points. “It takes a while until you figure out your routine and you find your stride and I’m very happy for this team.”

Force hopes the strong weekend carries into Houston, but the Top Fuel class is loaded with talent. She beat Terry McMillen in the finals last year, and Force will also have to deal with the likes of Salinas, defending world champ Steve Torrence, points leader Doug Kalitta, Leah Pritchett, Clay Millican, three-time world champ Antron Brown and Gainesville winner Richie Crampton. But she hopes to capitalize on the way the team is racing right now, eyeing a jump in the points standings. She sits just a round out of fourth and is pleased her team is being rewarded for its hard work.

“We really hit it hard (in Vegas) and it really showed,” Force said. “We were running consistently in the 70s, awesome all weekend and we came out and ended up runner-up. I’m very happy. Big moves for all of us as a team all around and I’m very happy with how we ended (last) weekend. We’re obviously looking for a win but we’ll have to chase it down (this) weekend in Houston.”

More in this category: « East Carolina Backs Weatherman & Ware At Bristol Toyota To Sponsor Kalitta At Houston »
back to top