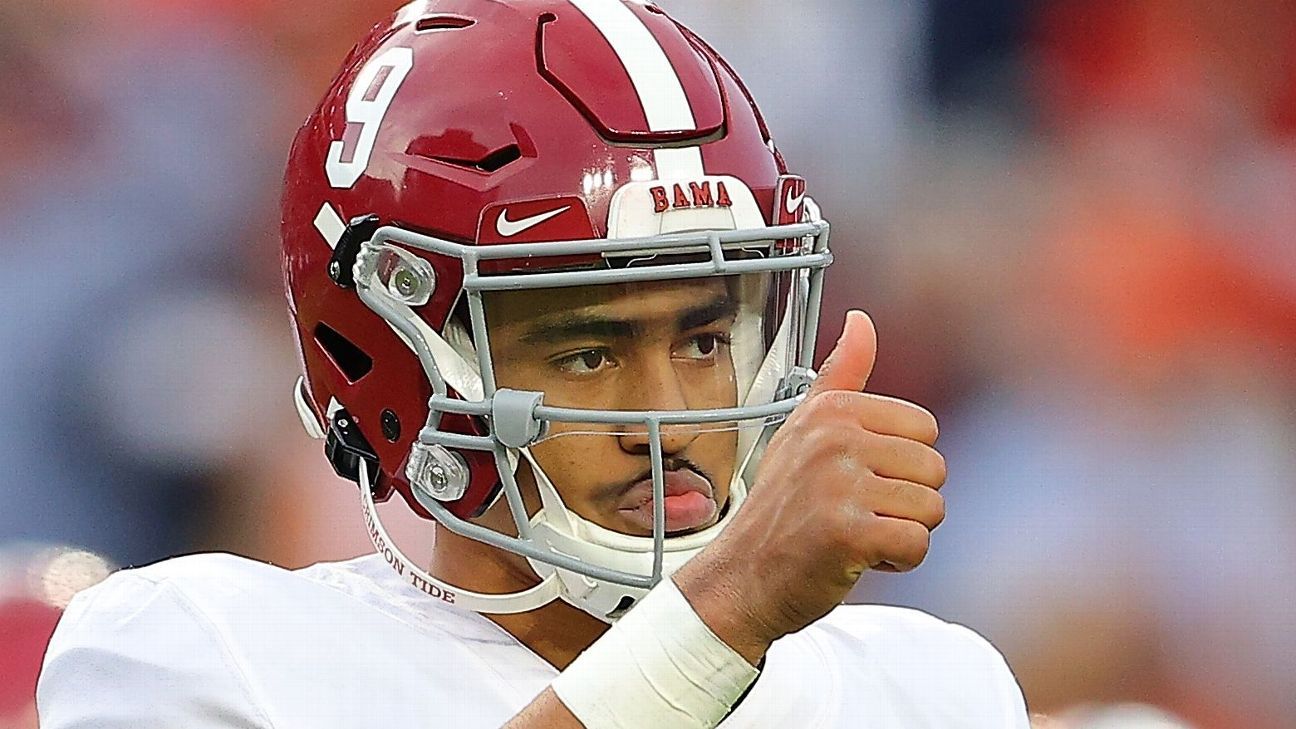 AUBURN, Ala. -- Despite turning in one of its most inept offensive performances of the Nick Saban era during regulation, No. 3 Alabama rallied to defeat Auburn in the fourth overtime period, 24-22.

With 1:35 remaining in the fourth quarter, trailing by 7 points and its playoff hopes hanging in the balance, quarterback Bryce Young led the team on a 12-play, 97-yard touchdown drive.

Wideout Ja'Corey Brooks, who entered the game with two catches on the season, came away with the game-tying 28-yard touchdown catch with 24 seconds left.

Auburn ran out the clock, forcing the first overtime in Iron Bowl history.

Young found John Metchie for a two-point conversion in the fourth overtime to win.

"I can't put it into words," Saban said on the postgame television interview. "For guys like we have to keep fighting, a 90-something-yard drive to tie the game up, and then to win in overtime? I tell you what, the players? I couldn't be more prouder of them."

Young came into the weekend as a Heisman Trophy favorite but struggled for much of the game.

Through the first three quarters, he completed 12 of 26 passes for 138 yards, no touchdowns and one interception. It was his first interception in his last 225 pass attempts.

But during the fourth quarter and overtime, Young was 12 of 22 passing for 174 yards, two touchdowns and no picks.

"It was unbelievable," Saban said.

Young was also without his top receiver, Jameson Williams, who was ejected from the game in the first half for targeting on a punt return.

It was the first of several mental mistakes by Alabama.

A second half field goal went awry when the holder, Paul Tyson, dropped the snap. It was the first time in five years that Alabama had gone three quarters without scoring a point.

Then, early in the fourth quarter, Young couldn't corral a low snap on fourth-and-2 and was sacked.

All told, Alabama committed 11 penalties for 129 yards, including a roughing the passer penalty in the fourth quarter that negated an interception. Alabama running back Brian Robinson, who was averaging 94.5 rushing yards per game, was held to just 64 yards on 15 carries.

"I was really just trying to get our guys to focus on executing," Saban said, regarding several of his sideline speeches during the game. "I think our guys were a little out of sync, and I could see it in their eyes. I just wanted them to go play. I told them to go have fun!"

Alabama will play No. 1 Georgia in the SEC Championship Game on Saturday in Atlanta.

More in this category: « Bama top WR tossed from Iron Bowl for targeting Portis gets 6 months in prison for fraud scheme »
back to top