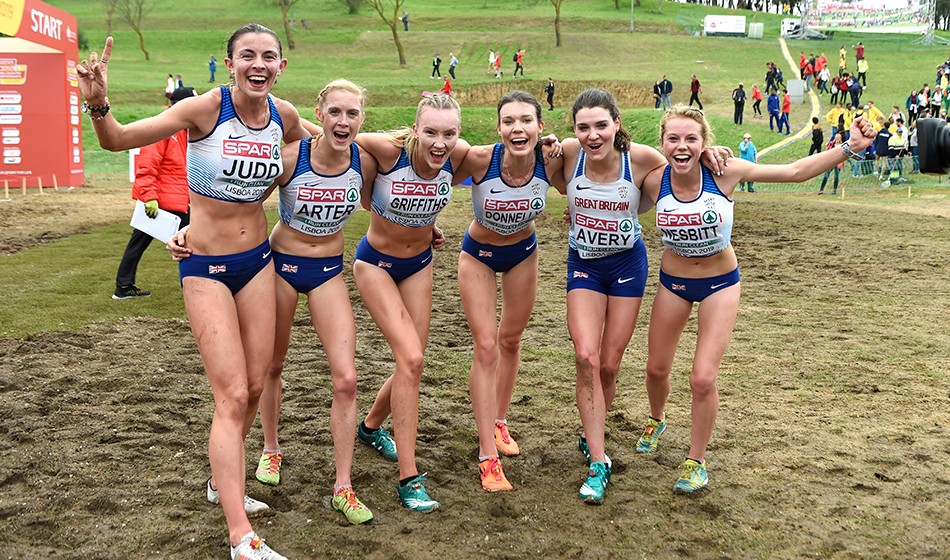 With twice as many medals as any other nation and three times as many golds in the history of the European Cross Country Championships, the Great Britain & Northern Ireland team will hope to continue its fine record in this event at the 2021 edition on the outskirts of Dublin on December 12.

In the senior women’s race five of the six women who struck team gold for Britain at the last European Championships in Lisbon in 2019 (main image above) will race again next week in Ireland. Only Amy Griffiths is missing from that victorious squad two years ago as last weekend’s trials winner Jess Judd is joined by Jenny Nesbitt, Abbie Donnelly, Kate Avery, Charlotte Arter (subject to fitness) and newcomer Jess Gibbon.

The senior men’s team face a tough test against a line-up in Dublin that will include Norwegian brothers Jakob and Filip Ingebrigtsen plus Frenchman Jimmy Gressier. They will be led by trials winner Jack Rowe and Olympic 5000m runner Andy Butchart – with the latter having led Britain to team gold in Lisbon in 2019.

Judd and Butchart both raced in Tokyo and they are not the only Olympians in the team. The 800m runner Alex Bell is part of a mixed relay team after winning the trial in Liverpool. She will be hoping to retain the title in this relatively new event although she has different team-mates compared to Lisbon 2019.

The most intriguing addition to the GB team is Charles Hicks. The US-based Briton is a student at Stanford University and has been in terrific form on the collegiate circuit recently. He was fifth in the Euro Cross under-20 race two years ago and led Britain to team gold on that occasion and will be hoping to make the podium this time in the under-23 event in a race that also includes trials winner Tom Mortimer.

“Following very competitive trial races in Liverpool, we are delighted to select these strong teams for Fingal-Dublin next month,” said British Athletics team leader Chris Jones. “We have several athletes who have competed in senior and junior teams at international level before, combined with nine debutants, so I am sure they will all support one another to deliver good team and individual performances at the European Cross Country Championships.”