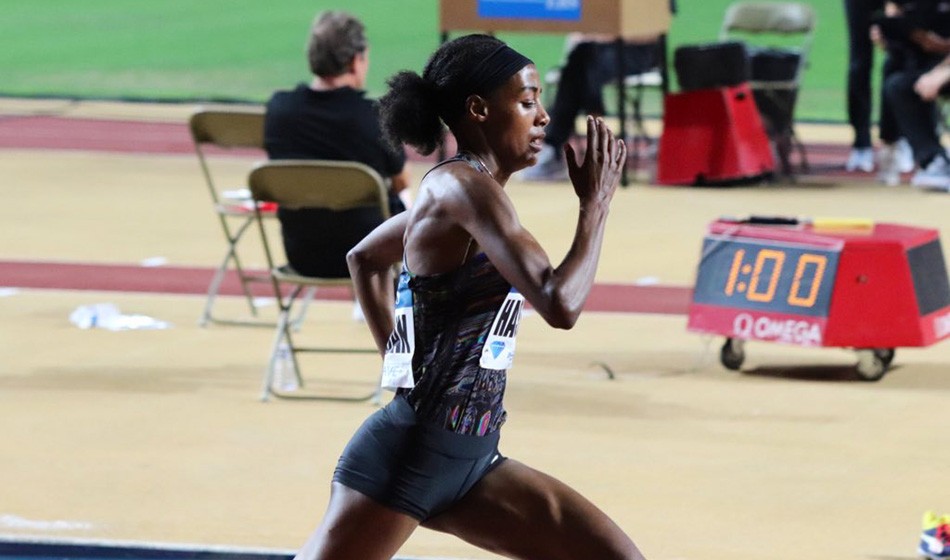 The women’s mile world record was broken on an incredible evening of action at the Herculis EBS meeting in Monaco on Friday.

It’s safe to say that few expected the global mark to fall in the ‘Brave like Gabe’ mile – it seemed almost impossible when the pacemaker Olha Lyakhova led through 800m in 2:08.20, which was well down on the advertised 2:05.

At this stage Gudaf Tsegay was trying to hang on but she faded as the Dutch athlete powered away on the last lap and, with a strong last 100m, she took 0.23 off Svetlana Masterkova’s 4:12.56 set in Zurich in 1996.

“It’s amazing to run a world record that way,” she said after her 4:12.33 run. “I knew I could run fast but the first 800m was a bit slow so I was not thinking world record so I was surprised when I crossed the line. A world record gives you confidence and I want to double over 1500 and 5000 in Doha.”

Finishing fast in second was an equally delighted Laura Weightman and she ran 4:17.60 to narrowly miss Zola Budd’s 4:17.57 British record.

It comes after her own impressive 3000m performance at the Pre Classic, where she moved to No.2 on the UK all-time list with 8:26.07.

“I just thought, get your head down and run as hard as you can,” said Weightman.

“I’m absolutely delighted to run 4:17. It is a big PB and I’m over the moon for Sifan to set a world record. She’s amazing and it’s special to share with her.”

The men’s 1500m was a strange race in that even though pacemaker Bram Som ran a perfect first lap of 55.08, it was not fast enough for world leader Timothy Cheruiyot who pushed past and encouraged second pacemaker Michael Kibet to lead past 800m in 1:51.28.

The pace slowed on the third lap though and it was Jakob Ingebrigtsen who led through the bell and 1200m in 2:48.75.

Cheruiyot assumed control and though not looking as dominant as in Lausanne, he pulled away to win in 3:29.97 with Ingebrigtsen just missing his recent European under-23 and under-20 record with another top-class 3:30.47.

Ronald Musagala set a Ugandan record in third in 3:30.58 just ahead of a delighted Charlie Da’Vall Grice, who took three seconds off his PB with 3:30.62.

That moved him up to fourth all-time amongst Britons behind Mo Farah, Steve Cram and Sebastian Coe and ahead of fellow former Brighton resident Steve Ovett.

Only five athletes have ever broken 1:42 at 800m and Nijel Amos did it for the second time as he won in a superb 1:41.89 to break his own meeting record and take 1.7 seconds off the world lead.

Jake Wightman was well off the excessive pace but finished well and his reward was a UK lead of 1:45.08.

The steeplechase was a cracking race and also saw a world lead and in fact the top five bettered the previous world lead.

On the last lap Benjamin Kigen looked in control and entered the straight with a good lead but he faded and he was caught by a fierce kick from Soufiane El Bakkali who won in 8:04.82 from Kigen’s 8:05.12.

Getnet Wale lost his world lead but did improve his Ethiopian record to 8:05.51 and there was a shock Spanish record for Fernando Carro who ran 8:05.69.

The field events saw some fantastic performances too.

Poland’s Piotr Lisek dominated as he carried on his great form to win the pole vault with a 6.02m world lead and meeting record leap to go 10th all-time and he had some good attempts at 6.06m.

Seven athletes jumped 5.82m or higher with second going to European champion Armand Duplantis, who jumped 5.92m, with Olympic champion Thiago Braz matching that with his best jump for a few years.

Multi world and Olympic champion Christian Taylor won a superb triple jump with a meeting record 17.82m to gain a narrow win over world leader Will Claye who jumped 17.75m.

Sydney McLaughlin looked a future world record-setter as she destroyed the field in the women’s 400m hurdles to win in a world-leading 53.32.

Over a second back Ashley Spencer (54.46) and former world champion Zuzana Hejnova (54.55) completed the top three.

The 100m hurdles world record-holder Kendra Harrison looks to be rounding into top form as she finished strongly to win in 12.43, overhauling Danielle Williams, who ran 12.52. World leader Janeek Brown (12.40) was fourth in 12.71.

The pacemaker Chrishuna Williams went through 400m alone in 56.12 without any care on what was happening behind her with the pack around two seconds back.

Ajee’ Wilson pushed on through 600m in 87.37 but could not shake off Jamaican Natoya Goule with Muir around five metres back.

Muir battled down the straight to hold off her fellow Scot Lynsey Sharp, who easily had her best run of the year with 1:58.76.

There was a very chaotic 400m.

Kahmari Montgomery clearly false started and a recall gun went off but the outside three lanes did not hear initially and while Davide Re and Anthony Zambrano realised every one else had stopped, Jonathan Jones did not and he completed the race in a reported and unofficial 44.6.

Five minutes later the rerun happened but without an obviously very fatigued Jones and Zambrano but curiously with Montgomery as seemingly the officials were distracted and let him run.

Andreas Hofmann continued his winning ways with a javelin victory in 87.84m while Mariya Lasitskene continued her dominance in the high jump with a 2.00m victory.

The previous evening, world leader and world champion Yulimar Rojas dominated the triple jump to win in 14.98m as Liadagmis Povea was second with 14.71m.