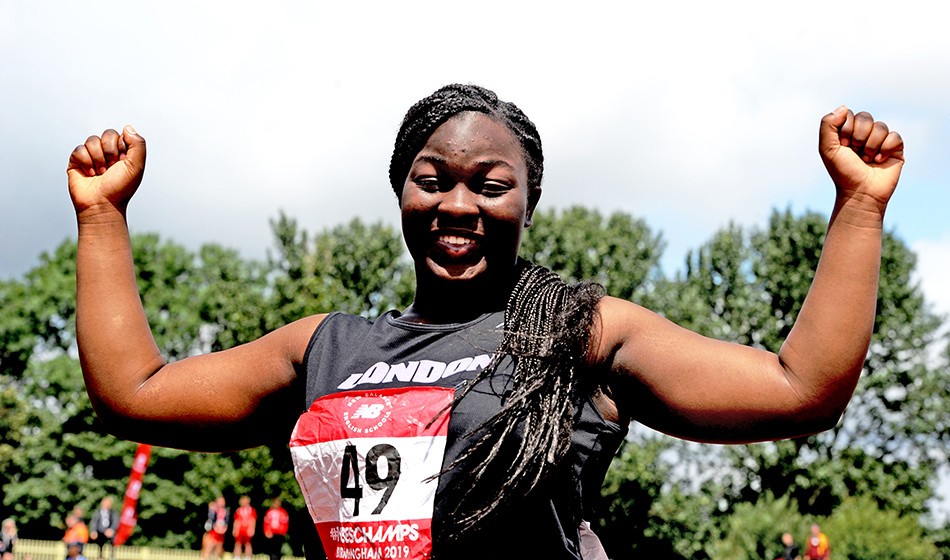 Nana Gyedu sealed her third English Schools shot put title on the first day of the New Balance English Schools Championships at the Alexander Stadium in Birmingham. The London athlete threw 15.06m to win inter girls’ gold by more than a metre as she beat Divine Oladipo’s championship record of 14.92m.

It was one of the leading performances on an opening day of the 89th English Schools Championships which was dominated by field events finals. “It feels good and it’s extra pleasing to break the championship record,” Gyedu beamed.

In pleasant but blustery conditions the jumpers were thwarted in their attempts to break records due to gusts of wind. They included Sam Brereton, who took his third English Schools title with 2.10m in the inter boys’ age group but did not manage to clear a 2.13m height that would have consigned Femi Abejide’s 2.12m championship record to the history books.

“It helps if the wind is behind, or none at all, but here it was a pretty bad headwind,” said the Cornwall athlete, who added that he’s given up playing in goal as a footballer in recent months in order to focus on athletics.

Elsewhere, winners included Sophie Ashurst, the daughter of 1986 Commonwealth champion Andy Ashurst, who took the inter girls’ pole vault with 3.80m in similarly blustery conditions on the back straight.

The feature on Daniel Falode in the current issue of AW magazine was well timed too as the London athlete won the inter boys’ triple jump gold by more than a metre with 15.27m into a headwind.

Further winners on this ‘field finals Friday’ included javelin thrower Lizzie Korczak, who threw 47.70m to win her third consecutive title as she beat Harriet Mortlock in a close inter girls’ contest, while Sam Mace took the senior boys’ hammer with 63.12m, Charlotte Payne the senior girls’ hammer by three metres with 57.53m and Serena Vincent won the senior girls’ shot by half a metre with 14.55m.