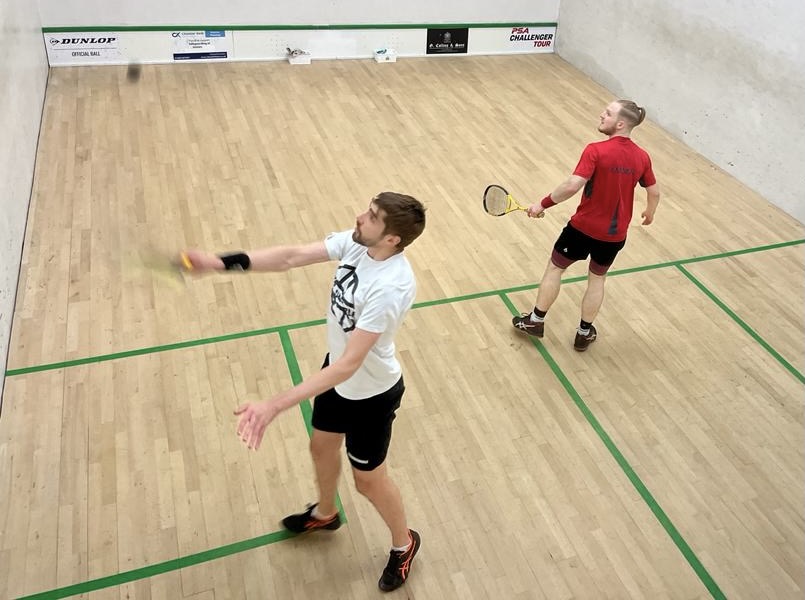 Brother and sister top seeds Curtis and Torrie Malik powered through to the semi-finals of the Colin Payne Kent Open, sponsored by 501 Entertainment, on the day when home hopes were halted.

More favourites fell by the wayside as Kent’s No.2 seed Josh Masters and No.8 seed Jack Mitterer both crashed out of the men’s competition after holding dominant positions.

Masters squandered a match ball against No.7 seed James Peach before losing in the fifth and Mitterer will be kicking himself for losing control against 17-year-old Finnlay Withington.

The world has changed gears since Masters last reached the Kent Open final after being awarded the wild card in 2017, finishing runner-up to Joel Makin on that occasion. Then he was in the rising star category; now he is an experienced pro and at 26 the oldest player in the whole competition.

He has also had to undergo two hip operations after issues affecting his mobility and in Tunbridge Wells he was up against a fast and fit opponent who knows his game inside out. The two shared an apartment for two years at the University of the West of England in Bristol and Peach, 22, is still based there as he hones his career options with Hadrian Stiff’s Elite Squash Academy.

Peach finished strongly to win the opening game and led 5-2 in the second, but Masters hit back to lead 8-6. Peach reeled off four points to hold game ball at 10-8 but Masters hit some outrageous winners to take the game 12-10.

From 5-4 down in the third, Masters pulled ahead to hold game ball at 10-6 and weathered a flurry of points from Peach to take it 11-9.

The fourth game was neck and neck all the way through until Masters held match ball at 10-9 and then again at 12-11, but Peach refused to bow down and clawed his way back to take it 15-13.

Peach led 6-3 in the fifth and although Masters hit back to 6-6, Peach pulled away to win 11-7 and book his place in the semi-finals against the fearless Finnlay Withington.

Masters said: “I had spent five hours coaching at Park Langley before driving down to play and I was feeling pretty tired. I felt I was moving OK but I know my hip will be sore tomorrow.

“In some ways it’s not too damaging to play two days on the trot but if I had gone all the way through and played four days in a row then the hip would definitely be feeling the strain. I have had two lots of surgery and will certainly need more.”

Masters recently won the Wild Card Challenge at Canary Wharf and will be training as hard as he can to make the most of the opportunity in March.

He added: “I will definitely try to cut down the coaching to give my body a chance but I’m looking forward to the best of three format there.”

Mitterer looked in control against Withington as he took the opening game 11-5 but the boy from Bury hit back to lead 8-5 in the second. Mitterer drew level and the pair traded points until Mitterer held ball at 13-12 and again at 14-13, but he failed to convert them and Withington took three points in a row to take the game 16-14.

Withington’s confidence grew and he led throughout to win the third game. In the fourth he pulled away from 5-4 ahead to win the final six points in a row.

Owain Taylor overcame No.4 seed Perry Malik 3-0 and the Welshman will now face top seed Curtis Malik for a place in the tournament final.

Taylor and Perry had crafted a 96-minute marathon in Scotland the previous week but the Welshman maintained control of proceedings in similar fashion in each of the three games.

From the scores being level around the mid-point of each game, Taylor pulled away to claim a run of points to open up a commanding and decisive lead.

Taylor is keen to follow his coach Chris Ryder and fellow Welshman Joel Makin to have his name engraved on the Kent Open winners’ trophy. He now faces Perry’s big brother Curtis, who enjoyed a straight-games win over the great entertainer Aaron Allpress, who conjured up some extraordinary Mizuki volleys as the points piled up against him.

Allpress began strongly and led 8-4 in the first game but that was the only time he held any semblance of control.

It was a day when the top four women’s seeds entered the fray after enjoying a rest day when Covid withdrawals decimated yesterday’s first round.

All four won through to the semis with No.2 seed Kace Bartley the only one to drop a game in her tie against Amy Royle.

Bartley faces a tough time in the semi-finals against the dazzlingly effective Satomi Watanabe, who took just 15 minutes to ease past Polly Clark.

Top seed Torrie Malik, playing remarkably mature squash for a 17-year-old, had too much for the enthusiastic Lara Newton, one year her junior.

She now faces the Egyptian No.3 seed Rana Ismail, who looked comfortably in control throughout her match against Sofia Aveiro Pita from Portugal.