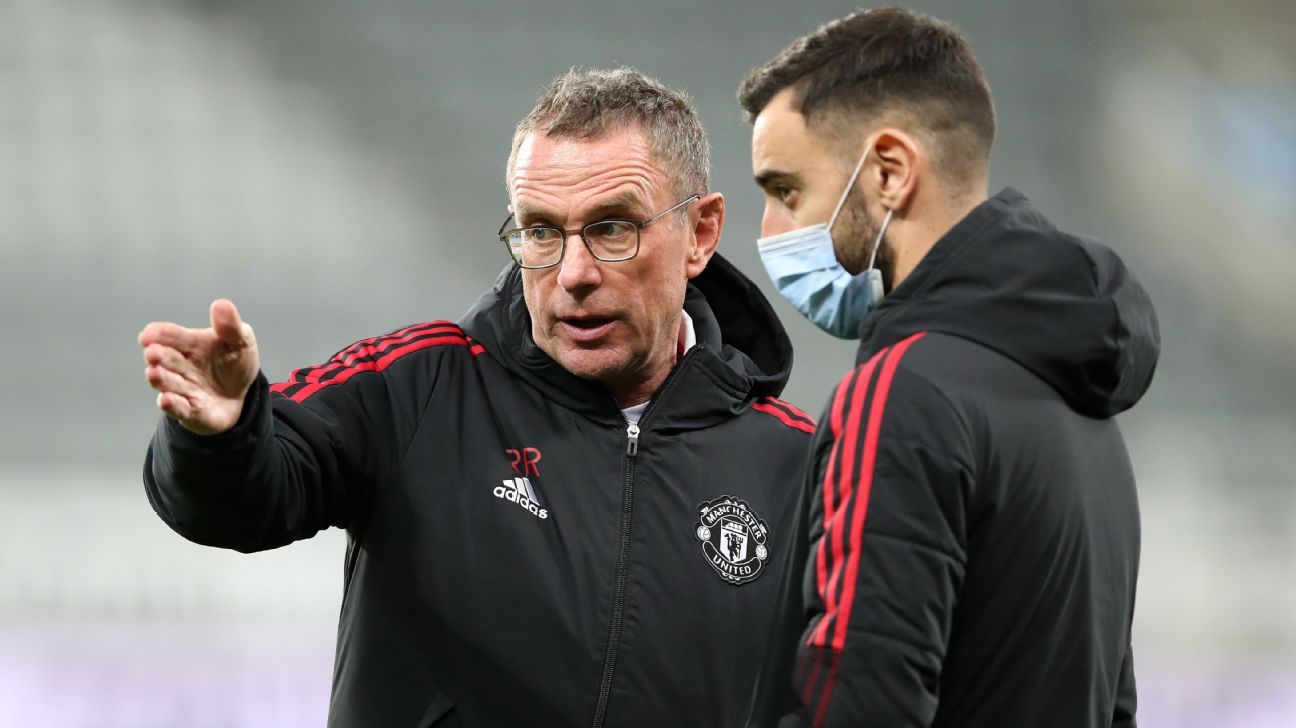 Ralf Rangnick has said Manchester United have not made as much progress as he had hoped in the first month of his reign.

The German remains unbeaten in four games as interim coach but his team were lucky to escape with a 1-1 draw against relegation-threatened Newcastle United on Monday after a dire performance at St James' Park.

- Ogden: Rangnick honeymoon period over after Newcastle display
- Ronaldo to Barca? Why Spain have day of prank stories
- Stream ESPN FC Daily on ESPN+ (U.S. only)
- Don't have ESPN? Get instant access

Rangnick is preparing United for a home game against Burnley on Thursday and while he said progress has been slow, the 63-year-old insists he has been hampered by the COVID-19 outbreak which saw the training ground shut and games against Brentford and Brighton postponed.

"Every ambitious coach, and there is no difference between other coaches and myself in that area, wants to take faster steps and larger steps forward," he said. "But in order to do that, you need to be able to train and, as you know, we had to close Carrington for four days.

"The last three days we were almost back to full strength with regard to the size of the squad but we couldn't do that much in training."

Rangnick was left with just seven available players at the height of the coronavirus outbreak but ahead of the trip to Newcastle had only Paul Pogba missing while the midfielder continues his recovery from a muscle injury.

The United coach was impressed with the sessions in the build up to the Newcastle game and said the limp display was a shock.

"In those two or three training sessions, the team looked good, therefore it really was a bit of a negative surprise the way that we played with regard to game speed and game tempo and physicality," he added.

Rangnick will be without Pogba, Bruno Fernandes and Victor Lindelof against Burnley.

Fernandes is suspended after picking up his fifth booking of the season against Newcastle while Lindelof has tested positive for COVID-19. Eric Bailly, who had been given permission to join up with the Ivory Coast squad ahead of the Africa Cup of Nations, has been recalled to the squad as cover.

Both Jesse Lingard and Anthony Martial were left out of the squad at Newcastle despite being available for selection and could come back into contention to face Burnley.

More in this category: « Barca face selection crisis amid COVID outbreak Liverpool edge to win over wasteful West Ham »
back to top