'Very disappointed' Kohli bemoans India's batting collapse: 'There's no running away from it' 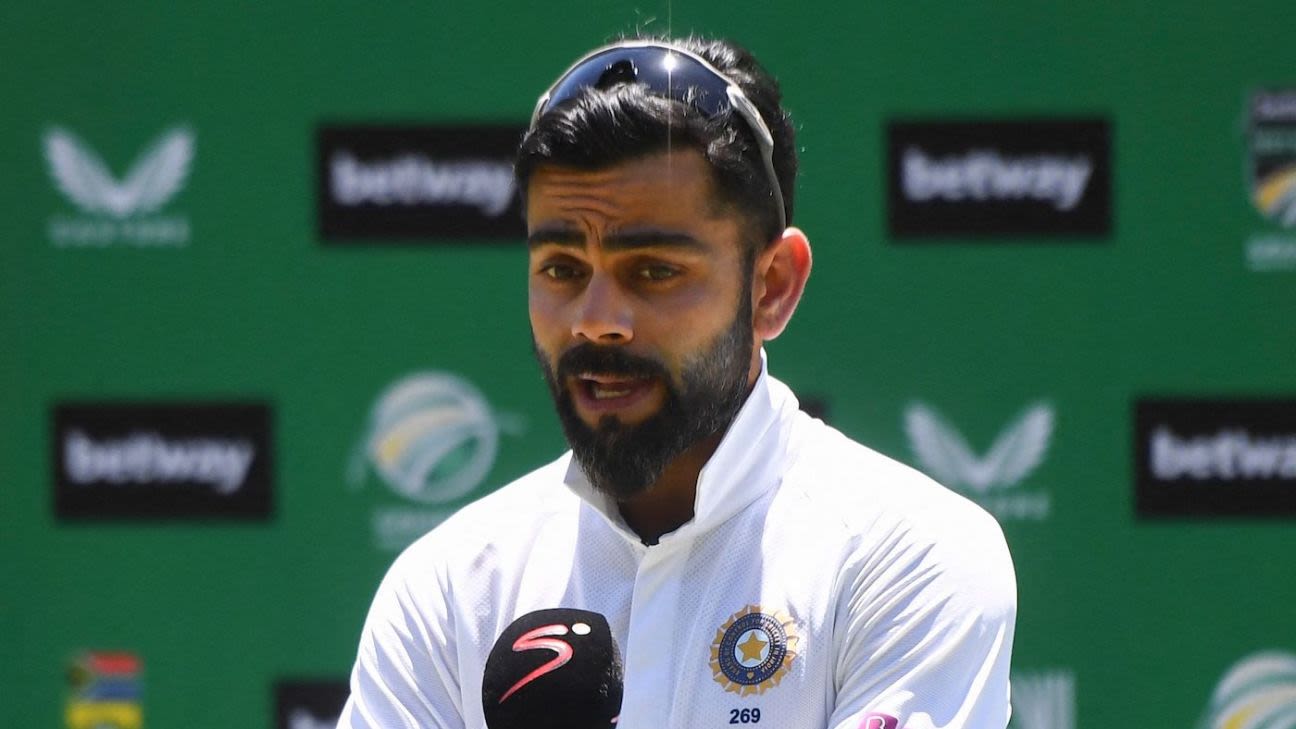 Virat Kohli has admitted that that there is "no running away" from the fact that India's batting needs to be looked into, after the team lost a closely fought Test series 2-1 to South Africa.
India had won the first Test in Centurion, but South Africa ended up chasing 200-plus totals in both Johannesburg and Cape Town to surge to victory, sealing it with a seven-wicket triumph at Newlands on Friday, the fourth day of the third Test.
"It is definitely batting. I don't think we can pinpoint any other aspect of our game as a team," Kohli said at the post-match presentation when speaking of what led to the defeat. "Yes, the batting obviously has to be looked into. There's no running away from that. Having collapses every now and then is not a good thing. And that's something we need to analyse and correct, moving forward."
All of Mayank Agarwal, Ajinkya Rahane and Cheteshwar Pujara averaged in the low 20s in the series, having played all three Tests. The tour continued a lean run for Pujara and Rahane, India's regular No.3 and No.5 for a long time now, but whose form has come under increasing scrutiny in recent times. Since the start of 2020, Pujara has averaged 26.29 from 20 Tests, while Rahane has averaged 24.08 from 19 games.
While India have played against top-quality attacks in bowling-friendly conditions in the last two years, Pujara and Rahane's averages are at the bottom for those who have batted at least ten innings in the top order (from No.1 to No.6).
At the press conference after the game, Kohli elaborated specifically on Pujara and Rahane, when asked about their immediate Test futures.
"Honestly, I cannot sit here and talk about what's going to happen in the future," Kohli said. "That's not for me to sit here and discuss, you probably have to speak to the selectors, what they have in mind, because this is not my job. As I said before and I will say again, we have continued to back Cheteshwar and Ajinkya because of the kind of players they are, what they have done in Test cricket for India over the years, and playing crucial knocks in the second Test as well.
"You saw that important partnership in the second innings [of the second Test], which got us to a total that we could fight for, so these are the kind of performances that we recognise as a team. What the selectors have in mind and what they decide to do, I obviously cannot comment at this moment sitting here."
Both Rahane and Pujara hit one fifty each in the series, during India's second innings in Johannesburg, where their stand of 111 propped India up. However, both failed in the second innings of the third Test in Cape Town, getting out within the first two overs on day three, taking India from a reasonable position to a wobbly one.
Reflecting more broadly on the defeat, Kohli said the team needed to come back better, to try and win a series in a country that no Indian team has so far.
"Obviously very disappointed. We know how far we've come as a team," Kohli said. "The fact that we come to South Africa and people expect us to beat the South African team in their own conditions is testimony to what we've done in the past. But that doesn't guarantee you any results. We still have to come out here and play hard cricket, which we failed to do this time around.
"I'm not going to stand here and say, 'Oh but we won in Australia, we won in England'. You have to turn up to every series and try to win that series, and we haven't done it in South Africa and that's the reality of the situation. We need to accept it, get better, move forward, and come back better cricketers. You give credit to the opposition when it's due and definitely this time around, as the case was the last time as well [in 2018 where India also lost 2-1], South Africa were much better than us in their own conditions."
Alongside the bowling - both Jasprit Bumrah and Mohammed Shami were consistently unrelenting with lines, length and movement - one of the bright spots for India was Rishabh Pant's swashbuckling century at Newlands. Pant made 100 not out in India's total of 198 in the second innings, where the next highest score was Kohli's 29.
On the positives to take from this series, Kohli praised the bowlers, and in particularly KL Rahul's returns as an opener along with Rishabh Pant's swashbuckling century in the third Test. It came a game after Pant had been pilloried for trying to smash Kagiso Rabada and getting out for a duck. Kohli later said that Pant was someone who would learn from his mistakes, and reiterated that point after the third Test.
"Definitely I think it was a high-quality knock given the conditions and the situation and the kind of bowling that was on display, and that's the talent he possesses," Kohli said. "Hence I said it's up to him to keep learning from the mistakes that happen, because we understand what he can do for the team on a regular basis and the quality that he has as a wicketkeeper and a batsman, he can surely keep doing it as a regular occurrence for India and that is only going to help the team to be in match-winning positions, because he's a special talent and he can do some special things. Tremendous knock, one of the better hundreds that I have seen."
Virat Kohli
Ajinkya Rahane
Cheteshwar Pujara
India
South Africa vs India
India in South Africa
ICC World Test Championship

Saurabh Somani is an assistant editor at ESPNcricinfo

More in this category: « Graeme Smith: South Africa to host Australia, England tours in 2023 Pakistan Under-13 and Under-16 tournaments suspended over age fraud »
back to top