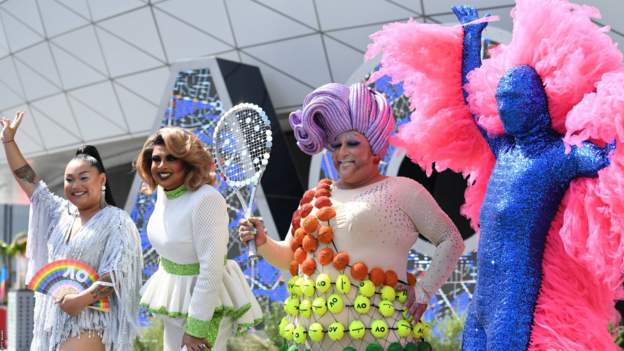 As darkness fell on Melbourne, the outside shell of Rod Laver Arena illuminated in rainbow colours.

It was a symbolic move on the Australian Open's first official Pride Day, and provided the most eye-catching moment of Monday's event.

Celebrating the LGBTQ+ community and aiming to improve inclusivity within tennis, it provided splashes of colour across Melbourne Park all day.

Most importantly it continued to raise awareness about the issues still faced by those who identify as LGBTQ+ and educating those who don't.

Rowen DSouza is the tournament director of Glam Slam, an event being held at the Australian Open for LGBTQ+ players, and he has been working closely with Tennis Australia on its Pride Day.

"I think tennis is a sport which has an opportunity to do so much more in LGBTQ+ inclusivity and promotion than other sports," he told BBC Sport.

"AO Pride made me feel very proud and really happy. It gave me great joy.

"What AO Pride is also about is the wider tennis community, engaging people, groups and stakeholders who wouldn't usually see tennis as a viable option to come and watch.

"Our community hasn't always been made to feel welcome at tennis. It wasn't necessarily where LGBTQ+ people were openly participating."

Many past and present female players are openly gay - including multiple Grand Slam winners Billie Jean King and Martina Navratilova - but no top-level male player has publicly come out while playing.

DSouza says it remains "a complex issue" for an active male player to announce they are gay.

"There are still countries like Saudi Arabia and Singapore where it is illegal.

"Also, are they as marketable? I'm not saying that is right or wrong but that's the way it is. We have LGBTQ people who would be financially disadvantaged by coming out.

"Our step is trying to get big brands on board, sending a signal that is saying big brands value LGBTQ people and will give you the same opportunities as straight players.

"Plus there can still be negative media attention. Would that affect performance? There are these issues to navigate."

Aside from the Laver illumination, rainbow colours - the symbol of LGTBQ unity - were dazzlingly visible across Melbourne Park throughout Pride Day.

Up to 5,000 rainbow flags were given out inside, with fans waving them and sticking them in baseball caps like antenna.

A digital Australian Open sign - popular for those wanting to get that perfect social media snap - also had a rainbow rebrand.

Drag queen Valerie Hex and singer MAY-A - who has spoken a lot about the pressures of conforming to sexuality labels - performed on stage, while rainbow roller-skaters, dancers and stilt-walkers provided more entertainment.

"This initiative brightens up the mood and everyone is behind it," said Damon Glavas, who was showing his support with friends Keegan McGarrity and Phil Viry.

"I think that it shows how Australian attitudes are changing in general. We love everyone here, whatever their sexuality, disability or race. We want to include everyone.

"As a country we've progressed a lot further in the past three to five years, I'd say. Going back 10 or 20 years, attitudes were a lot different.

"The majority consensus is that Australia was a little bit behind the rest of the world in embracing LGBT support. We were late to the party, but now we are here."

Support for the LGBTQ community has also been shown by Australian Open players over the fortnight.

On Pride Day, the Australian Open released a video of a host of top players - including Ashleigh Barty and Stefanos Tsitsipas - promoting the event.

"That makes me feel really proud. I'm really surprised how far we've come," said DSouza, who is on the board of the Gay and Lesbian Tennis Alliance, which sanctions amateur LGBTQ tournaments all over the world.

"Allies are where we make the difference now. People who wear pride symbols and show support make me so happy.

"We have more support than we think so seeing Liam and Thanasi supporting us it great. People are jumping on board."

There remains one major issue which - for some - could serve to undermine the good work.

The second show court at Melbourne Park is named after Australian 24-time Grand Slam singles champion Margaret Court, who has long created controversy and anger with her views about the LGBTQ+ community.

The player-turned-pastor sparked widespread condemnation when in 2017 she said tennis was "full of lesbians" and that transgender children were the work of "the devil".

She has also said she would not fly on Australian airline Qantas "where possible" in protest at its support of same-sex marriage.

Many in the tennis world - including Navratilova and King - have condemned Court for her views. In 2020, Navratilova and John McEnroe paraded a banner at the Australian Open calling for the Margaret Court Arena to be renamed.

"I advocate for a name change but the trust has its own process."

Younger fans, who were interviewed as they showed LGBTQ+ support in the stadium on Monday, were unaware of the comments made by Court. But older Australian tennis followers - who remember Court as a player - did know about the controversial topic.

One group - Melburnian trio Wendy Sharpe, Karen Outram and Kerry Oechsle, all aged in their early 60s - made it clear they disagreed with Court's views.

But they were also were unanimous in thinking the stadium should not be stripped of her name.

"I have a gay son, so obviously I'm very supportive of Pride Day and believe it should be celebrated," said 60-year-old Wendy.

"And I think Margaret Court should have kept her mouth shut. But I definitely don't think it should be renamed."

While disagreeing with Court's views, Karen, 63, and Kerry, 62, also believed the name of the stadium should remain.

"I think she has a right to her opinion but that should not detract from others who have a different point of view," said Karen.

"I disapprove of her opinions but she is still a champion who we've all known and loved."

Kerry added: "People have different views and hers are not ideal. But I think the two issues - her tennis achievements and her views - should be separated and the stadium should not be renamed."