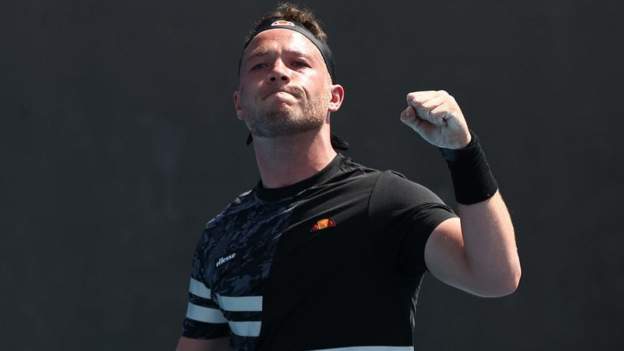 Britain's Alfie Hewett will contest both the wheelchair singles and doubles finals at the Australian Open, and says he feels like a "totally new person".

The 24-year-old beat France's Stephane Houdet 6-1 6-1 to reach the singles final, and on Wednesday will partner Gordon Reid in the doubles final.

Hewett found out in November that he would be able to continue his career after passing an impairment assessment.

"To be honest with you, I'm a totally new person," Hewett told BBC Sport.

"I feel like a massive weight has been taken off my shoulders," he added.

"Everyone around me has noticed just how free I am with it all - relaxed. When I'm on the tennis court I'm enjoying myself much more.

"Sitting here in Australia, I've enjoyed my trip so much more than maybe what I was doing last year and it's reflected in my tennis. I feel I am stronger mentally for it and I'm also enjoying the occasion."

In 2019, Hewett - who has Perthes disease, which affects his hip and femur - was told new classification rules would make him ineligible to compete. But once the rules were reviewed to take into account the specific physical demands of wheelchair tennis, he was given the green light to play on.

Hewett's trip to Australia started in the worst possible way, when he tested positive for Covid on arrival.

"I was transferred to another hotel in which I had a balcony, a lawn - they gave me all the equipment that I needed to be able to keep up with the fitness stuff.

"I was looked after very well and it gave me seven days of peace and quiet rather than playing continuous tennis for maybe two and a half weeks. I certainly wasn't complaining when I got the penthouse suite when I arrived!"

Hewett had to sit out the first pre-Australian Open event, but returned in time to win last week's Melbourne Open when Kunieda retired at four games all in the opening set.

Hewett and Reid will secure a ninth consecutive Grand Slam title if they beat Kunieda and Gustavo Fernandez in the doubles final.