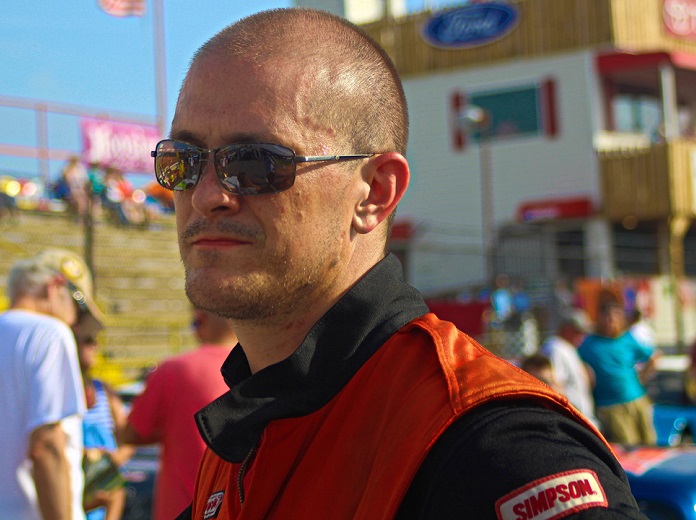 PELETIER, N.C. – Brian Sullivan has been a contender each time he has competed in the INEX Legends division at Bobby Watson’s Carteret County Speedway.

Sullivan, 37, returned to Legends competition last year after not competing in the cars in over a decade and found speed right away. The Holly Springs, N.C. native went on to finish second twice in 2018 and began this season with a third-place finish on March 30.

“I’m really excited about how fast I was able to get back up to speed in Legends,” Sullivan said. “After 15 years of not driving a Legend Car and nine years of not driving any race cars, I was a little concerned I would not be able to keep up. Thankfully, Dustin Tyson at Riverside Auto Group had purchased a car and needed a driver so I was kind of in the right place at the right time.

“I really can’t say enough about those guys. They’ve given me great equipment to work with.”

Sullivan has been a contender each time he’s raced at Carteret County Speedway. He has led laps and come close to winning races but has had some tough luck – including a blown motor while leading a race last summer.

Sullivan, however, does not believe in luck.

“I’m not real sure I believe in luck,” Sullivan stated. “I believe that, by putting the best prepared car on the track, the wins will happen. I just need to keep working hard and learn what it is going to take to get the car to stay fast for all 35 laps.

“Once that first win comes, then I believe we are going to be hard to beat.”

Irving won the race, while Brown and Sullivan were able to pass Day on a late-race restart.

“Last race, we had a bad restart and fell back,” Sullivan explained. “I basically overdrove the car to get back in the lead but the right rear tire got too hot and we fell all the way back to fifth. I had to take it easy for a few laps and get back in a rhythm. Had a little trouble getting past fourth-place finish cleanly and then we had a caution coming to a green-white-checkered. I felt like I still had a shot.”

Sullivan and Brown frantically battled for the runner-up spot on the final two laps of the race, which resulted in both drivers spinning on the frontstretch coming to the checkered flag.

“Coming to the green, [Irving] and [Day] were rubbing tires down the backstretch and then [Day] and [Brown] got together getting into turn one. Coming to the white flag, I was in third behind Zack and I knew he was a little loose,” Sullivan said. “I had a really good run down the backstretch and felt like I could possibly set him up coming out of turn four to the checkered. I managed to get a good run through the center again and, as I turned down off of turn four, I saw him get loose again. I lifted to stay off of him and it looked as if he would save it, then he snapped hard left.

“Luckily, when we made contact, we were sliding across the line and my bumper hit right in the side of his nerf bars and neither car took substantial damage and we both stayed on the podium.”

After a strong start to the season, Sullivan is now setting his sights on victory lane at Bobby Watson’s Carteret County Speedway.

The INEX Legends division will be in action for 30 laps in Saturday afternoon’s Spring Thaw.