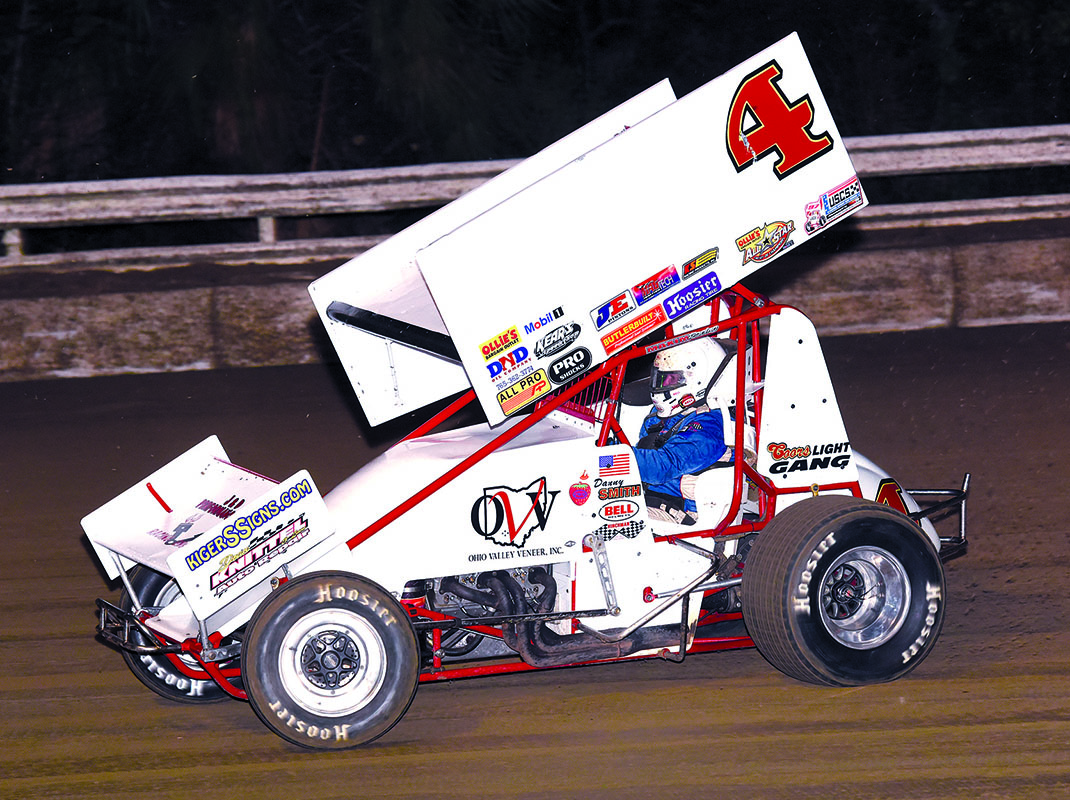 When Danny Smith won the United Sprint Car Series season opener at Florida’s Hendry County Motorsports Park in late January, he took one goal off his plate almost before the season began.

Smith has now won at least one feature for 44 consecutive seasons, a record few can match. And while it might not have been an outlaw-quality field, the fact Northeast power Davie Franek and Tony Stewart rounded out the podium, showed Smith still has game.

Following the win, Smith ran 410 and 360 shows all over Florida, waiting for the weather up north to improve so he could go to his usual Midwest haunts.

“I keep going because it’s my passion,” Smith said. “I’ve never had a real job and I can’t see starting one soon. My wife, who’s a nurse, told me that if I kept the race car going, she’d keep the house going. I’m 62 now, so I take it a year at a time, but if I stay healthy who knows how long I’ll keep racing.”

Hall of Famer Jack Hewitt says he could have predicted Smith’s long career before he even started.

This content is accessible to subscribers only. To read the rest of this article, please login, or if you are not a subscriber, signup here and explore our subscription options starting at just $19.95 per year. Subscribers have access to all premium content including SPEED SPORT Magazine features and editorial and exclusive programs and features on SPEEDSPORT.tv. Don't miss out on this tremendous value!
“It was 1973 or so and Danny was just a punk kid,” Hewitt said. “We had a two-day show at Winchester, so after the first one we went over to a bar in Greendale, Ohio. Danny came with us and used somebody else’s ID to get in.

“Pretty soon he was passed out on the table, but he kept waking up and saying, ‘All I want to do is race sprint cars’ before putting his head back down again. Once he got started, he turned into a really hard, successful racer who’s been an ambassador for the sport because fans and sponsors love him.”

Smith recalls his first victory as vividly as his most recent.

“I started in my dad Mike’s car. He was a racer, then he had a speed shop,” Smith continued. “That was before the Outlaws and before the internet. We didn’t even know about the first Outlaws race at Devil’s Bowl or we’d have gone. In ’78 they raced at Eldora and that’s where I picked it up. I think we ran about half their races that year.”

While most racers struggle to remember certain things after decades of 100-race seasons, Smith has a memory like the proverbial bear trap.

“We made our first trip to California that year, 1978, and we all went together. We raced Devil’s Bowl and Lawton, then went straight to Calistoga in a caravan,” he said. “It was a fun trip. I’d never heard of tow money and I was amazed when Ted (Johnson) gave us money and rooms. I thought we’d finally hit the big time.”

“I remember when Danny started,” said Rick Ferkel, one of the first WoO racers. “He was a really young kid wanting to learn how to race. He was a little rough around the edges, but he had a lot of potential.  Pretty soon, he was a competitive Outlaw.”

“In 1980, I got in the Gambler car for East Bay,” Smith recalled with a big grin. “C.K. Spurlock had called me looking for somebody to beat Steve Kinser. We won our first Outlaws feature at Big H in Houston and managed to beat Steve a few other times as well.

“It was quite an adventure. Having Kenny Rogers’ name on it attracted a lot of attention, mostly women trying to find Kenny,” Smith added. “He was hot at the time, so local radio stations would sponsor us in different towns. I drove for Spurlock until the middle of ’82, when I got hurt at Sedalia and Jac Haudenschild took over the ride. I sat out until late fall with a broken back. The handwriting was on the wall that Doug Wolfgang was going to take the car over for ’83, so I came back in Johnny Vance’s car at Paragon.

“The next year started out great, as I won an All Star show at Jacksonville and an Outlaws show at East Bay. We planned on running the whole Outlaws tour but all of a sudden, Johnny got divorced and I was walking again.”