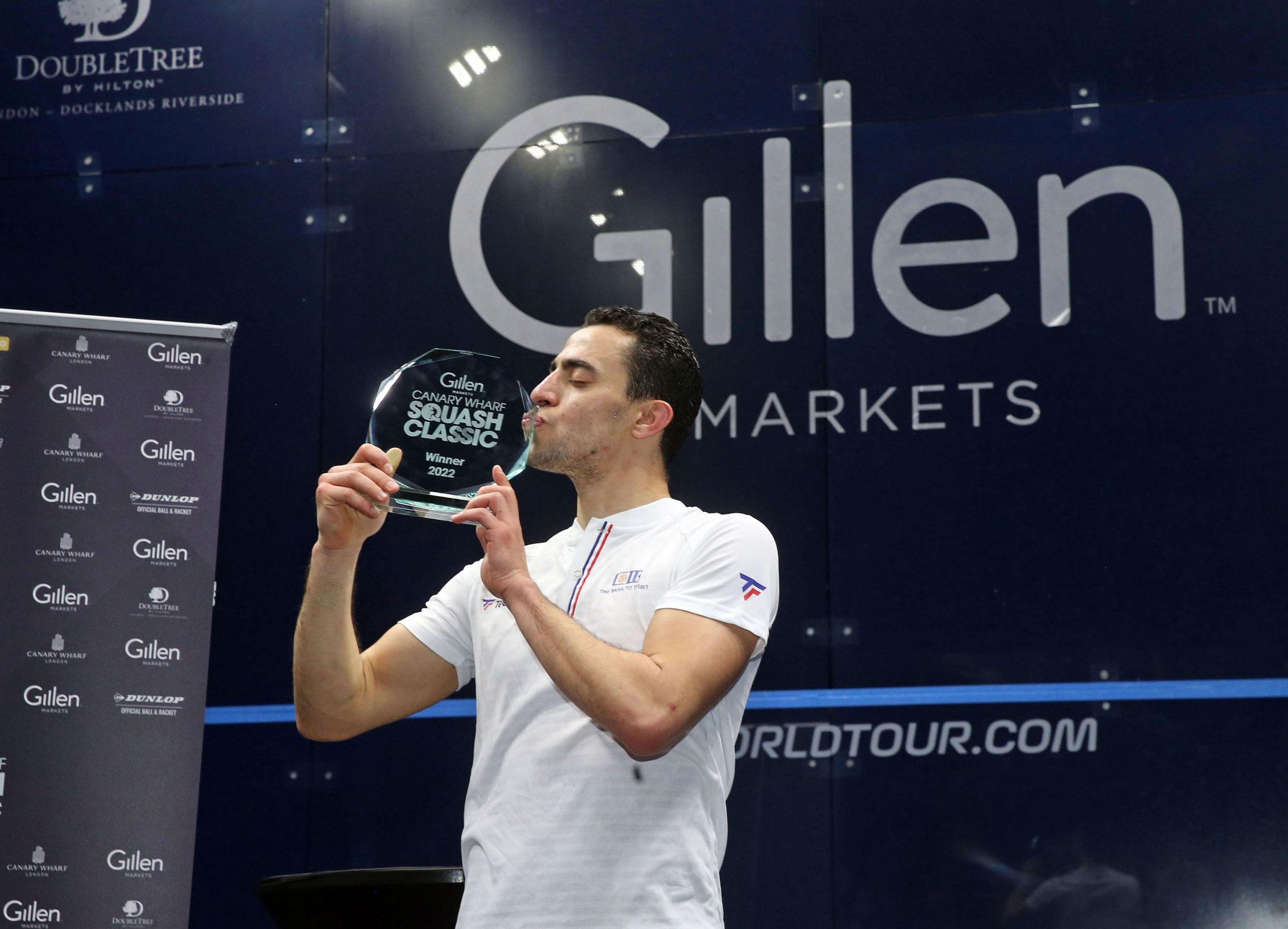 Dessouky was in tears after receiving his winner’s trophy from Gillen Markets founder Rory Gillen, the title sponsor.

The 27-year-old No.7 seed Dessouky has endured a difficult time with injuries since reaching the final in 2017 and finishing as runner-up to Nick Matthew.

Tonight he was moving smoothly and playing in imperious style against an opponent who could not raise his game after two extraordinary marathon matches against Joel Makin and Diego Elias.

As Dessouky drove the ball around court with pace and precision, and fired in winners with the same level of accuracy, Asal failed to hit the same standards that he had achieved in those two tiring encounters.

Asal reached game ball in the second but failed to convert a 10-7 lead as Dessouky fought back to win 13-11 to open up a two-game lead.

He had dominated the first game and regained control in the third to reach match ball at 10-7. This time his patience an control deserted him as he hit a drop shot and a boast into the tin and Asal drew level with a brilliant winner.

However, Dessouky was first to 11-10 and won the title with a stroke against Asal, whose appeal was denied by the video review.

Amazingly, these two players meet again in the British Open second round in Hull, and Asal said: “That one’s mine!”

He was humble and respectful in his tribute to Dessouky after the match, and refused to use the lactic acid build-up in his legs as an excuse after such a punishing week.

He said: “I gave it more than 200 per cent. Fares and I are good friends. I’m really happy that he’s back. His squash is unbelievable, his skills are unbelievable and I’m glad to see him back with a bang.

After wiping away the tears, Dessouky said: “First of all I want to congratulate Asal for an unbelievable week. You played so well, you are number one material. You have to keep working hard and keep believing in yourself. We’re playing in the British Open so we have to get on with that.”

Dessouky has also enjoyed entertaining the packed crowds at the East Wintergarden all week and added: “I want to thank you guys for coming. You make it unbelievable and thanks to the sponsors, let’s make this a platinum event.

“This is one of the best venues in the world so we want to make it bigger and bigger. If you guys want it to be best of three, we can keep going. It’s working well.

“I want to thank Tim Garner for everything that he does. He makes all of our lives easier. Thanks to the refs, they did a great job this week. I know it’s not easy with some ups and downs during the week, but they dealt with it very well.

“I also want to thank my ex-fitness coach. He’s back in Alexandria. I used to train with him but now I’m in Cairo, but he’s always catching up with me and making sure I’m fit and healthy so I want to thank him so much for that.”

In closing, one interesting thought occurred to me. Dessouky tipped Asal as a future number one, but if he can maintain his health, and continue to perform at this level, who knows how high our new Canary Wharf champion can climb?