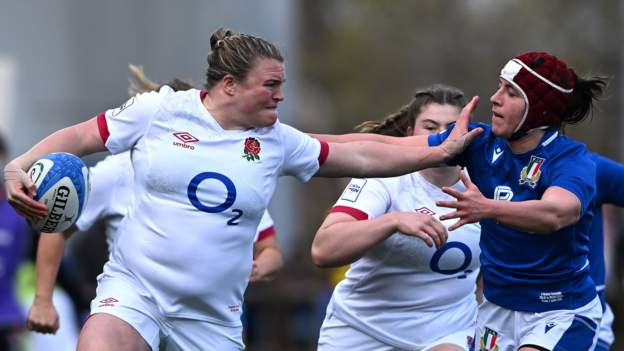 England crushed Italy in Parma as they racked up a 20th successive win and stayed firmly on course for a fourth straight Women's Six Nations title.

Thompson scored two more tries in the second half to complete her hat-trick.

Prop Sarah Bern's extraordinary 50-metre burst was the pick of the scores, 30 seconds after her arrival off the bench.

Fellow replacements Vicky Fleetwood, Emma Sing and Emily Scarratt - with her 50th England try - also added their names to the scoresheet after the break, with McKenna picking up her second.

England have been playing under fatigue so far in the the tournament with high levels of training in the build-up to matches.

But the Red Roses were far too fresh and bright for the hosts as they ground down Italy with big carries and smart handling.

Italy's players never lost heart, throwing themselves into tackles despite the scoreboard damage.

But any faint hopes of a huge underdog victory, after defeats in all 22 of the teams' previous meetings, were soon snuffed out.

England take on an unbeaten Wales side next weekend, but the final-weekend showdown with old foes France, who have beaten Italy and Ireland by more than 30 points in their two openers, looms ever larger.

England's win takes them back to the top of the table, courtesy of a 126-point points difference.

In sparkling sunshine at the Stadio Sergio Lanfranchi, England took advantage of the conditions from the start, with forward runners offloading and punching holes in wide channels.

It was a piece of prime opportunism that delivered the first try however, as McKenna darted blind and scrum-half Natasha Hunt, playing her first Test since November 2020, provided the pass for her to walk in unopposed.

Opposite wing Thompson scooted in for her 39th England try after Vickii Cornborough's charge-down and regather, while Davies and Brown rumbled over from close range to guarantee the bonus point within 28 minutes.

The impressive Matthews, who staked her claim to a regular spot in England's well-stocked back row, scattered blue shirts with a fifth first-half try.

Coach Simon Middleton promised in the build-up to the match that his side would never ease off their opposition, with internal competition for places and the quest to regain the World Cup from New Zealand later this year keeping the pedal to the metal.

His side duly showed little mercy after the break. Thompson rounded her opposite number two minutes after the interval while Fleetwood was the beneficiary at the back of a steamrolling maul.

Bern's score, thirty seconds after her arrival off the bench, followed as she showed an extraordinary turn of pace to scamper home after Hunt's half break.

Scarratt pounced on Zoe's Harrison's deliciously weighted grubber for her first Test score since she suffered a broken leg at the end of last year.

It was another performance to show the depth of talent at his disposal. And the difficult decisions ahead.

Player of the match - Natasha Hunt