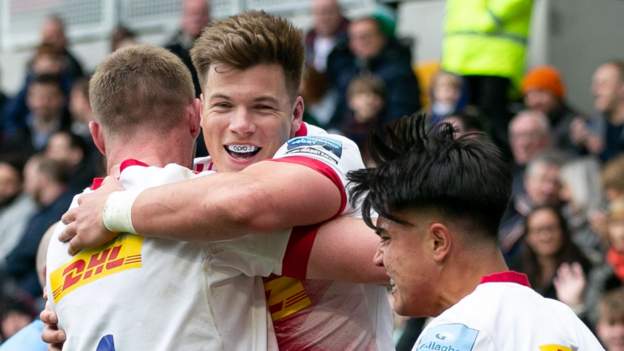 The champions fell behind to Paddy Jackson's converted score but stormed back for a resounding derby triumph.

Jack Walker and Huw Jones both scored a brace of tries, with Cadan Murley, Danny Care and Andre Esterhuizen also going over for the visitors.

Benhard van Rensburg's late effort was no more than a consolation for Irish, whose top-four hopes are all but ended.

Irish began at a frantic tempo, finding plenty of space out wide but failing to capitalise until Curtis Rona fed Jackson, who crossed the line with ease before kicking the extras.

Quins struck back, forcing their way through with a driving maul from the line-out for the first of Walker's tries.

But Ollie Hassell-Collins almost restored the Exiles' advantage, only to be denied when the TV replay ruled the ball was not cleanly grounded.

That paved the way for the visitors to seize control with three tries in the space of eight minutes, two of them created by England fly-half Marcus Smith's incisive passing to Murley and then Jones in opposite corners.

The third came on the stroke of half-time, with Walker taking a quick return from Hugh Tizard at the line-out to dive over just seconds after Irish's Nick Phipps had been sin-binned for a deliberate knock-on.

The home side's hopes of a second-half fightback faded after Rona was held up fractionally short of the line and Lucio Cinti then lost control of the ball as he sped down the wing.

Instead, Care bundled his way over to finish off a slick passing move and extend Quins' lead and, although the former England international was later yellow-carded for knocking on, it made little difference.

Esterhuizen broke through a tiring Irish defence to score again and, despite Van Rensburg's determined drive to the corner, it was Walker who had the final say. He collected Will Edwards' looping offload to add the gloss to Quins' fifth consecutive league victory.

"I've rarely been involved in a match where we've created so much and twice missed the put-down, then two goal-line drop-outs and it's a different game.

"So I don't believe there's that much difference between the teams, but the scoreline is what it is and we have to accept that.

"In fairness to Harlequins, they took their opportunities. The way we went about our business, I am proud of the boys.

"Their endeavour was good and I know that will turn for us on another day."

"We always back ourselves even when we're down by seven points. The final score was really emphatic but, as we saw for the first 15 minutes, it was a real arm wrestle.

"When we look at this, it won't be our scoreline, it'll be how we contained them to only two tries. That's a massive positive for us.

"When you get two teams with positive intent, you're always going to see the ball move and turn over and they had us under pressure a number of times, as we knew they would.

"So to take away a win is really important for us in the long run."