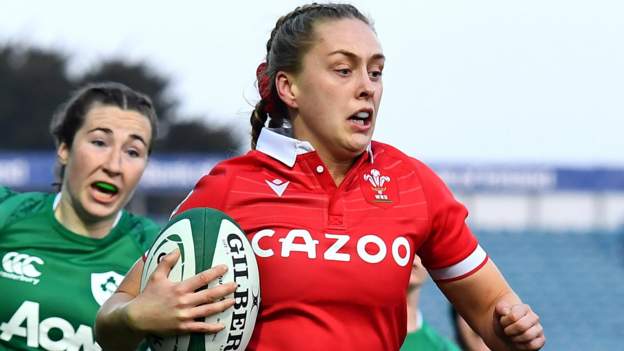 From receiving congratulations while out shopping to holding debriefs on Six Nations wins with Shane Williams in the local swimming baths.

It has been a surreal couple of weeks for Wales centre Hannah Jones and her international team-mates following a successful start to the 2022 Six Nations.

Jones, 25, has played an integral part in bonus-point wins over Ireland and Scotland, as typified by her superb solo try in Dublin.

The much tougher test that is the world's number-one ranked side, England, awaits in Gloucester this Saturday.

But the successes of the early days of professionalism in the Welsh women's game have brought a public reaction which, to Jones, has been welcome and surprising.

"It's been brilliant," she said.

"Getting the two wins means we could not have asked for much a better outcome.

"It takes a little bit longer walking around the Tesco aisles these days - it is nice to have the support of the community.

"After the first week they were saying to me 'nice try' and 'good win'.

"I went to the pool in Ammanford. Shane Williams was there and it was nice to speak to him.

"He watched our game and he said well done on the win, so it's nice to know the men are watching as well and we are getting recognised for it."

A record crowd of more than 6,000 in Dublin was followed by almost 5,000 fans watching the success over Scotland, the highest attendance for a women's international in Wales.

"I would never have thought we would get that crowd, we are thankful of the support we have had," said Jones.

"There was a tournament in the Principality Stadium with all the little girls playing there and they then came over and watched our game.

"It was a great atmosphere and it was much better playing in front of a crowd like that than empty seats."

The numbers will rise again this weekend, with more than 11,000 supporters expected at Kingsholm as England aim to extend a 20-match winning run.

"We are playing the world number one and if we do that, they are going to punish us.

"We have to start fast and go for it. We have nothing to lose and I am looking forward to the challenge ahead.

"I am looking forward to seeing what we have put in training and seeing if we perform against the best.

"We will face the pressure of having to play in front of 11,000 with the world's best in front of you.

"If you want to be the best you have to play the best."

Jones knows Kingsholm well given that she plays her club rugby for Gloucester-Hartpury.

"I love it at the Shed," added Jones.

"I have played there a few times now and there is always a brilliant crowd and facilities.

"The noise is something we will have to cope with in our communications. We have hand signals if we can't hear each other in the backline.

"It's going to be a very loud game, so hopefully we can have some travelling Welsh fans and we can hear them."

Jones and her Welsh team-mates also know the strengths of their opponents as many play for sides in the Allianz Premier 15s.

"It is a good challenge to play with and against them," said Jones.

"It will definitely give us a confidence boost going into this weekend knowing we do play with them week in, week out in the Allianz Premiership, so why can't we push them on the weekend?"

"Ioan has brought confidence for us and an attitude of playing within structure but also expressing yourself," added Jones.

"There is no doing wrong and there is a lot of confidence shown in us as players to go out there and play what we see and back ourselves, which I don't think we have had before.

"He has come from an experienced background at Scarlets and knows what he is talking about, so it's nice to have that in place."