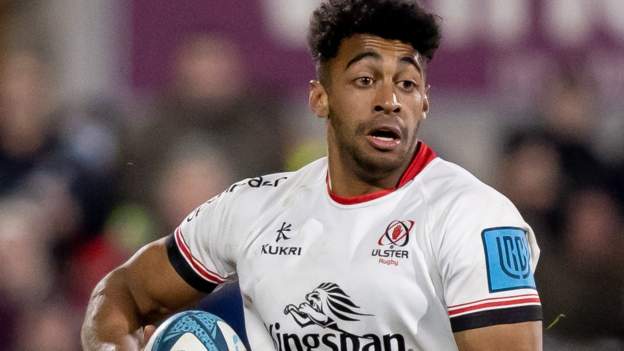 Robert Baloucoune will be available for Ulster's European Champions Cup last-16 first leg tie away to champions Toulouse on Saturday.

The Ireland wing did not travel to South Africa with the squad for their recent United Rugby Championship games against the Stormers and the Bulls.

But assistant coach Dan Soper said on Tuesday that Baloucoune is "available for selection", although Ethan McIlroy is set to miss out.

McIlroy sustained concussion in last weekend's defeat by the Bulls in Pretoria and is now following the normal return to play protocols.

Former Ulster star's Marcell Coetzee's display helped inspire the Bulls to a dominant 34-16 win over the Irish province which came a week after Dan McFarland's side had appeared decidedly unlucky to lose against the Stormers following a controversially disallowed late try.

Players have 'bounce in the step'

Despite the two defeats, Soper said the Ulster players' morale remains high heading into their clash in France.

"A European week away to one of the European giants is not a difficult one to arrive with a bounce in the step so the guys were on it today. We had a really good day," said the Ulster assistant at the squad's weekly media briefing.

While the two-legged European tie will be decided on the aggregate score, Soper insisted that Ulster's only focus this weekend is on "trying to win game one".

"We're not looking at this in terms of a Champions League Football-like type scenario.

"We will go to Toulouse to try and win that game and then off the back of that, start looking at the next one. We haven't really discussed at all that it's a two-leg event."

With the star-studded Toulouse squad having 10 of France's Grand Slam-winning squad including captain and player of the tournament, Antoine Dupont, Ulster look to be facing a huge task but Soper insisted that the Irish province's win over Clermont-Auvergne before Christmas should give the team belief for this weekend.

"We've been able to go to Clermont and win so we'll draw on their experience of those occasions and that just adds layers to our development as a team and gives us a good chance to go there this weekend and win.

"There tends to be a certain way French teams play and you can see that with the national side.

"They have this unbelievable ability to turn these moments of nothing into something brilliant. To deal with that takes a real collective effort of all 15 guys staying in the moment for as much of that 80 minutes as they can.

"So there are a lot of similarities between playing Clermont away and playing Toulouse away. Albeit they are different teams but it's still a similar sized challenge."