Pat Lam: Bristol squad will be 'improved' and 'stronger' next season 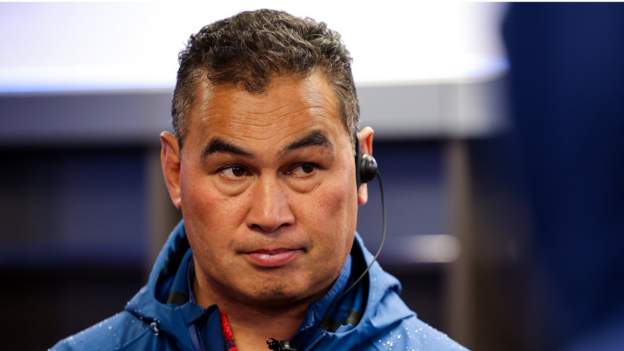 Bristol director of rugby Pat Lam said the squad will be "improved" and "stronger" next season, despite reports of financial unrest at the club.

Bristol released a statement on 1 April reiterating its compliance with the Premiership salary cap.

It came as the Telegraph reported the club was having to offload players because of an administration error that could have led to a breach of the cap.

Lam insisted this season's £5m salary cap had been adhered to.

"I think fire sale and all those things came out - that message was a lot to our fans. Don't worry, no problem with the salary cap, don't worry about the strength of our squad," said Lam.

The comments came as Dave Attwood's departure was confirmed, returning to West Country rivals Bath next season for a second spell.

However, Lam pointed to the high-profile signings of fly-half AJ MacGinty from Sale and England prop Ellis Genge from Leicester, which were announced earlier this season, as well as recent arrivals in winger Gabriel Ibitoye and Hartpury back row James Williams as evidence the team will be bolstered next season.

"A lot of the work was done and even Ibitoye, James Williams, all of this was done way before. It's business as usual, carry on.

"I do the majority of all my main work even before January. All we do is just hold announcements until the appropriate time."

Despite topping the Premiership table last season, Bristol have struggled for consistency this year and languish in 10th place with only six wins.

They are, however, through to the last 16 of the Heineken Champions Cup and face Sale away on 9 April in the first leg of the knockout round.

England prop Kyle Sinckler is available for the first time since playing for England in the Six Nations, while captain Steven Luatua has recovered quicker than expected from a dislocated wrist sustained in their defeat by Harlequins.

"Kyle's trained well this week so he's on track," Lam said. "Steven will be available for selection this week.

"Steven can read the game outstandingly well and gets the best out of the guys around him. He's calm under pressure as well - that's why he's been superb for the Bears."