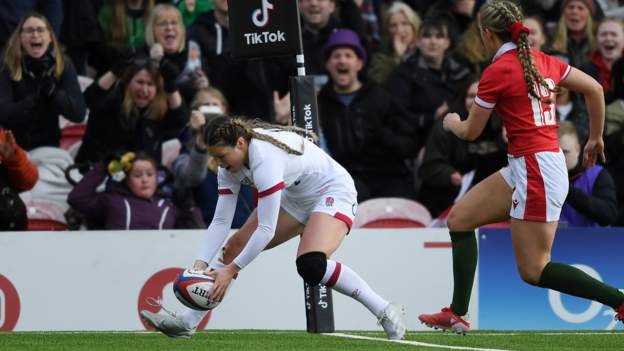 England are likely to set another attendance record on Sunday, with more than 14,600 tickets sold for their Women's Six Nations match against Ireland at Leicester's Welford Road.

England is set to host the 2025 World Cup and the Rugby Football Union wants 82,000 fans at Twickenham by then.

While 14,689 is the record for a ticketed England home game, the world record for a women's international is 17,440, when France hosted the Red Roses in the 2018 Women's Six Nations.

England attracted 13,253 fans - the previous record for a Red Roses home game - for the 2010 World Cup final, which they lost to New Zealand at Twickenham Stoop.

Crowd sizes have fluctuated since then, with England selling out Doncaster's 5,000-capacity Castle Park for a 2020 Six Nations match before moving on to bigger venues.

The RFU hopes that a home World Cup can eventually attract 82,000 to Twickenham, with Welford Road the next step on the journey.

England hooker Amy Cokayne recognises the leap to filling Twickenham is large, but is starting to believe as she experiences "the biggest Six Nations" she has ever been involved in this year.

"When we got spoken to about bidding for the World Cup, the idea of selling out Twickenham was thrown out there," the 25-year-old said.

"For a lot of girls it was like 'good luck doing that'. But to see the crowds we've been creating for the Six Nations, we're closing the gap on that for sure."

Cokayne could make her England return on Sunday after tearing her calf playing for Harlequins in February.

Lark Davies and Connie Powell have played in her absence, contributing to England's domination of the tournament so far.

The Red Roses - who are seeking a fourth successive title - have claimed three bonus-point wins in which they have scored a total of 189 points and conceded just 10.

They face an Ireland side who have won one of their three games and who will be without a large part of their squad with seven players balancing the XV-a-side game with sevens duties and two absent through injury.

Cokayne said facing such a reduced side is "quite disappointing", adding: "You want to be playing the best.

"You don't want to play a team that is severely depleted. For whatever reason they can't really control that with scheduling.

"With England we're quite fortunate in that our sevens and XVs programmes are quite separate now so we don't have those kind of issues."