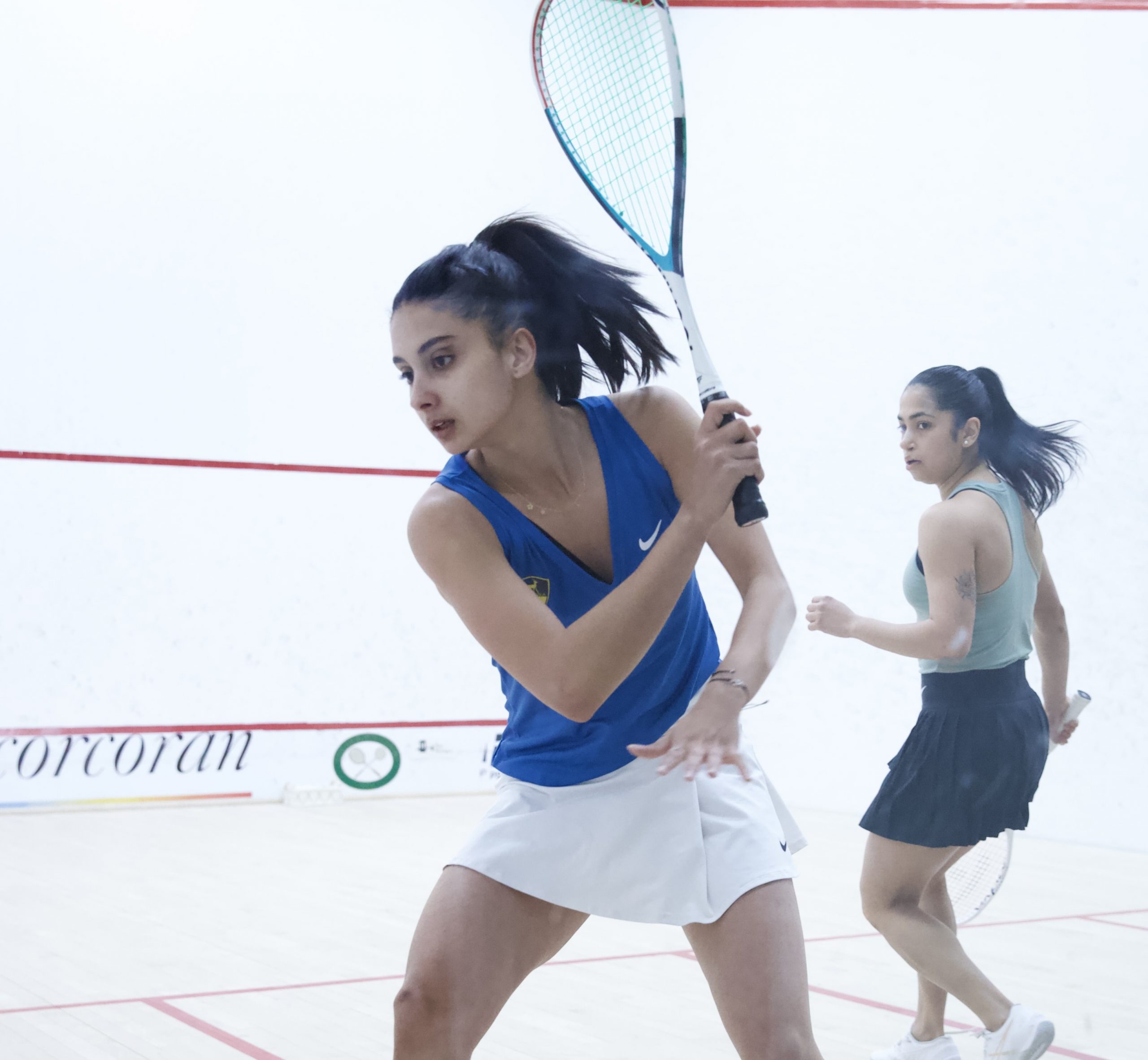 Americans Olivia Clyne and Sabrina Sobhy won through to the quarter-finals of the Carol Weymuller Open at Heights Casino, with Sobhy meeting No.1 seed and world No.8 Rowan Elaraby in the last eight.

No.7 seed Sobhy beat Ineta Mackavica from Latvia in straight games but Clyne was fully extended before overcoming Egypt’s Hana Moataz 11-8 in the fifth.

Sobhy is currently ranked 23 in the world after reaching a high point of 18 back in September. Mackevica is ranked 44 and based in the great squash city of Paderborn, Germany.

The American was in control for most of the match but Mackevica rallied strongly in the second. After delighting the crowd with a crosscourt nick in the third game, Sobhy said: “Nerves are always present at the first match of every tournament, so I am trying to keep a very simple game plan. I am happy with the win and looking forward to tomorrow’s match.”

Brooklyn-born world No.17 Clyne was made to battle for a place in the quarters by Egyptian Moataz, the world No.70. Moataz is about to graduate college in two weeks and is excited to embark on her pro squash career, with a bright future ahead of her in the game on this evidence.

The match was played at a fast pace, with exciting shots and both players covering the court well. Clyne looked in a strong position as she led by two games to one, but she struggled to remain patient during the fourth and made too many mistakes.

Moataz won the fourth 11-8 leaving the home crowd wondering if Clyne could cope with her skilful and resilient opponent in the final game. Clyne rose to the occasion and finally came through to win the fifth 11-8, leaving the court to a chorus of whooping, whistles and cheering and with a big smile on her face.

Clyne meets another Egyptian, Farida Mohamed, in the quarter-finals and said: “Honestly, it’s just nice to win a match! It’s been a rough couple of months and a win is a win. I’m just happy to play tomorrow and have another match back to back.

“Hana is a great player with lots of potential and one hell of a head of hair! It’s almost better when it’s hard and then you are ready for hard the next day.”

Mohamed, the world No.26 from Egypt who plays her college squash at Columbia, beat England’s Lucy Beecroft, a Yale graduate ranked 63 in the world.

In a sometimes fractious match, Beecroft squandered game balls in the first and second before Mohamed got off to a good start in the third with a mixture of power and precision.

Beecroft showed her skill and fighting spirit but Mohamed closed out the match 13-11, 13-11, 11-7 for a place in the quarter-finals against local favourite Clyne.

College rivalry was on display as Cornell’s Sivasangari Subramaniam, the individual collegiate champion from Malaysia, met Marina Stefanoni, who is studying at Harvard and has arguably been one of the most successful players to emerge from US junior squash.

Subramaniam began impressively, winning the first nine points, before Stefanoni could begin to make any kind of impact.

The Malaysian played some outstanding squash to take the first two games but Stefanoni fought back to win the thirds. However, Subramaniam regained her control to dominate the fourth and book a place in the quarter-finals against Hollie Naughton, who won an all-Canadian second round tie against Nicole Bunyan.

After beating wild card Akanksha Salunkhe, the world #99 from India, top seed Rowan said: “I’m feeling fresh. I played here a few years ago and I was so young back then. I think I came here this time with more experience and lots of things learned.

“I have never seen Akanksha play before but I was expecting a good match as she played a good match yesterday. I’m happy I’m through in three and looking forward to the next round.”

Tournament promoter Linda Elriani looked on with pride as another Weymuller week unfolded. She is one of the few event promoters in squash and is delighted to see so many young women benefit from combining squash and studies.

She said: “We had eight more wonderful matches today with the top seeds joining the fun. One thing that struck me when looking at the Weymuller draw was the amount of women that are, or have, attended college here in the US and have now gone on to be amazing world class squash players.

“This not only shows us that the standard of college squash in the US is truly incredible, but it also shows that a player can get a great education first before embarking on a professional squash career and still make it to the top ranks. So wonderful to see and very inspiring!”