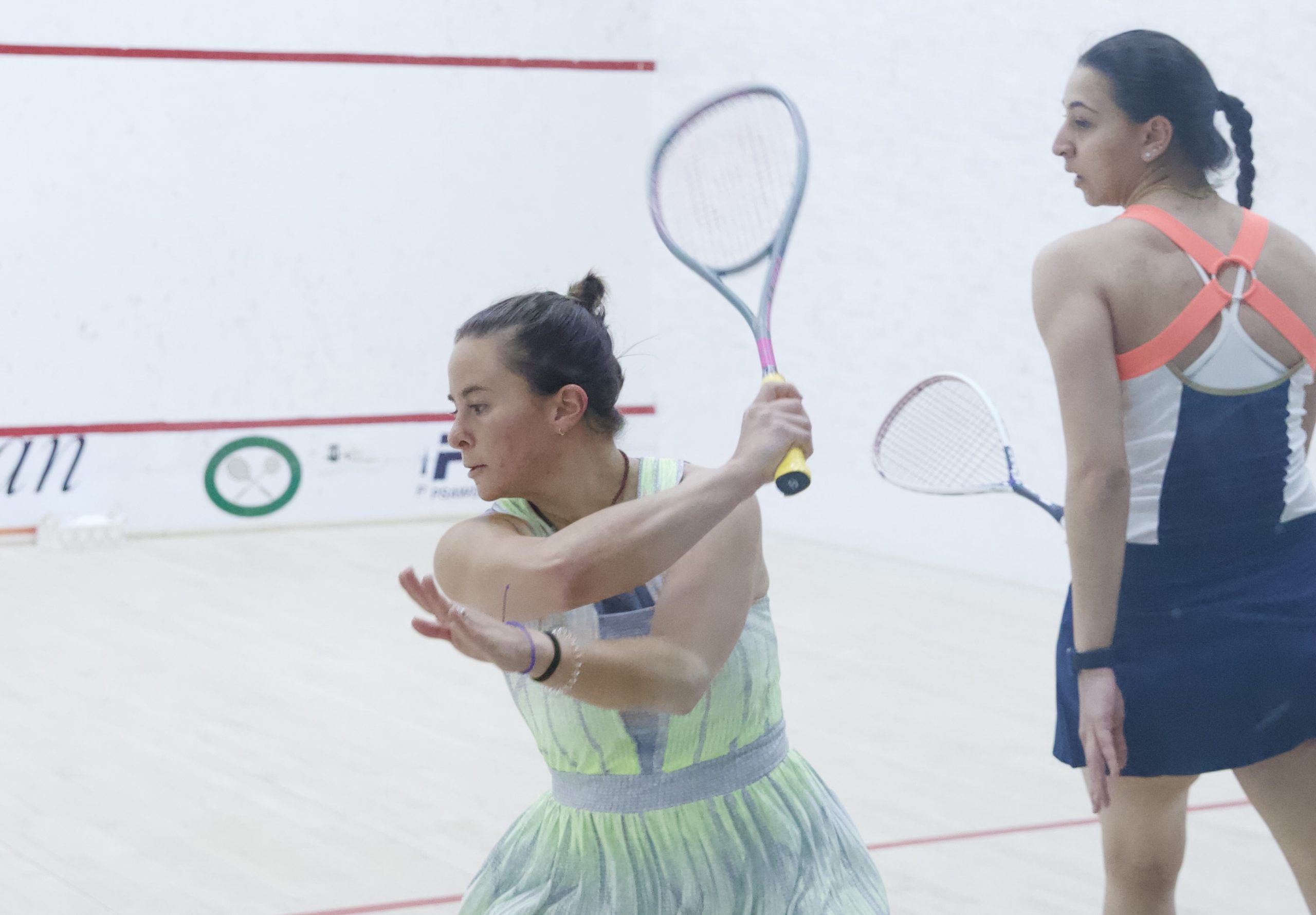 Hopes of home success in the Carol Weymuller Open ended as Olivia Blatchford and Sabrina Sobhy were eliminated at the quarter-final stage at Heights Casino in Brooklyn.

No.2 seed Clyne fell to Egypt’s Farida Mohamed in straight games after Sobhy had lost a tough four-game battle with top seed Rowan Elaraby, the world No.8 from Alexandria.

The closest match of the night was the first on court with Elaraby and Sobhy serving up a treat for the Casino crowd.

Elaraby won the first two games but No.7 seed Sobhy turned on the style to play a perfect third game, winning 11-1 to arouse hopes of an upset.

The fourth game was full of drama and included a sensational rally won by Sobhy after diving across court to keep the ball in play at one point.

Elaraby, clearly frustrated at letting the rally slip away when she had looked in control, responded by slotting a crosscourt volley nick off Sobhy’s serve.

The fourth game stayed almost point for point right through to 8-8. The crowd wanted to see this incredible match go to five, but an error from Sobhy and a perfect backhand drop from her opponent took Elaraby through 11-9 to give her a place in the semi-finals of a 50K tournament for the first time.

She deserved the win after playing so well and more handling the big points more effectively.

The 21-year-old Elaraby said: “I feel amazing. I’m very happy to be through today. I have played Sabrina before and I know what a great player she is and I wasn’t expecting any less today.

“I gave it everything and more to get through in the fourth. For tomorrow, I try not to concentrate on who I am playing, just me and the ball.”

World No.17 Clyne struggled to find any kind of rhythm until the third game against the much taller Mohamed, who controlled most of the match from start to finish.

The 20-year-old Egyptian had the height advantage and used it well, taking the ball early, keeping the pace high and cutting the ball off short at every opportunity. Her short game was accurate with very few errors.

It was only when Mohamed was 2-0 up and holding match ball at 10-6 up that a few errors crept in and Clyne fought back to 10-9.

We suddenly saw glimpses of the familiar Clyne style, using her great length and short shots as a combination to outmanoeuvre her opponent.

The crowd grew louder in the hope that Clyne could stave off defeat but a stroke allowed Mohamed to take her place in the her first 50K semi-final, just like Elaraby.

A relaxed and happy Mohamed said: “It’s my first and biggest semi-final so far so I’m really happy. Olivia has so much experience and she’s world No.17 and No.2 seed in the tournament so I had to be prepared mentally and physically.

“I’m really happy with the way I played and I am looking forward to the match with Siva. It’s the first time I have played Siva so it’s exciting to play someone new.”

Tournament director Linda Elriani said: “Siva was literally on fire! She is bouncy, young and fit. She is light on her feet and plays in a wonderfully relaxed way and has the correct percentage of attacking and patience in her game plan.

“Siva also has amazing variety in her short shots and uses holds and flicks on shots that other players do not often attempt.

“Hollie is such a strong player in many ways but this evening Siva didn’t give Hollie anything to play with and she seemed to run out of ideas of how to impact her opponent.”

The Malaysian said: “I felt really good on court today. I stuck to my game plan, keeping the balls into the corner and following up in my short game.

“Hollie is a big fighter so I needed to keep to going until the end.”

Australian Lobban fought hard before losing in four to world No.15 Shahin. Lobban worked the ball around court intelligently in the first game and created openings to hit some outstanding winners at the front.

She took the game 11-9 but Shahin stepped up the pace to dominate the second and third. She looked home and dry as she led 8-5 in the fourth but Lobban produced a fierce response.

She dug deep to regain control and used her short shots precisely again. It looked to many that Lobban managed to win the fourth 12-10, but there was a big dispute about her opponent’s pick-up and in the end the referee played a let because he was unsure.

This totally got into Lobban’s head, and instead of sitting outside the court preparing for the fifth game, a couple of errors later she has lost the fourth 13-11 and consequently the match. Lobban showed her disgust with a swift racket throw and shake of her head as she left the court.