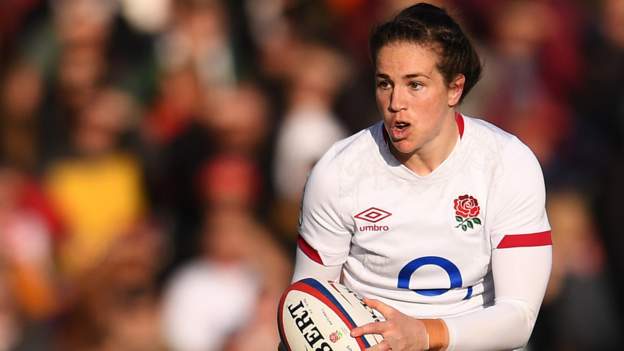 Centre Emily Scarratt will win her 100th England cap in her hometown of Leicester in Sunday's Women's Six Nations encounter with Ireland.

World player of the year Zoe Aldcroft makes her return from injury at lock, pushing Poppy Cleall to the bench.

With Ireland's sevens and XV-a-side programmes combined, many of the usual starting side will be away preparing for a sevens event in Canada.

England captain Sarah Hunter praised Scarratt for reaching the milestone and helping to boost the exposure of women's rugby along the way with her work in the media.

"I feel very honoured not only to call her my team-mate but my friend as well," Hunter said.

"I hope she takes all the plaudits. She fully deserves all this attention."

Middleton rotated most of his 40-player squad through the first three games, previously saying those matches would be an opportunity for players to earn a starting shirt in the last two rounds.

With a record crowd of more than 15,000 expected, the head coach is deploying all his best players as England prepare for a possible title decider against France - also unbeaten so far - on the final weekend.

Lydia Thompson is named on the right wing, with Holly Aitchison at 12 and Leanne Infante starting at scrum-half for her 50th cap.

Jess Breach impressed on her return against Wales and moves across to the left wing to make way for Thompson.

Rowland - normally a fly-half or centre - fills the gap left by Abby Dow, who is a doubt for October's World Cup after suffering a broken leg against Wales.

Hooker Amy Cokayne and prop Hannah Botterman are set to return from injury as they are named among the replacements.

England are on track to claim a fourth successive Six Nations title after three bonus-point wins and face an Ireland side who have claimed one win in three games.

Middleton said Ireland's lack of available players is "a shame because they were going really well".

"Ultimately it's down to where they put their priorities," he added.

"If they feel that at this point in time they're working towards a different goal in terms of sevens or XVs, it's down to them."