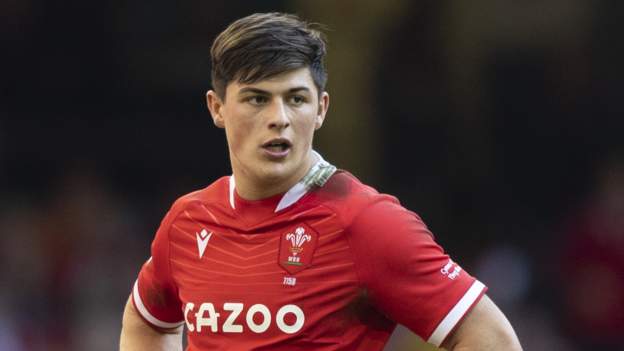 Louis Rees-Zammit said he is aiming for a winning end of season with Gloucester after learning from being dropped by Wales during the Six Nations.

The winger, 21, was not selected for Wales' match against England in March.

He instead featured for Gloucester in the Premiership against Northampton Saints and scored a try shortly after coming on as a replacement.

"When you get dropped, when you play bad, I've just got to learn from it," Rees-Zammit said.

"So many players have told me the only way to get back in the team is to work hard and work on what you've been told to work on. That's basically what I've tried to do.

"It's not really a confidence thing because I know what I can do. It's just about working on all your workings in training and just trying to go out there on a weekend and put it to show."

Rees-Zammit was a breakout star of the 2021 Six Nations tournament, scoring four tries to skyrocket his profile.

However, he struggled to make an impact for Wales in the opening ties against Ireland and Scotland this year and was dropped by coach Wayne Pivac, but returned for the final games of the tournament against France and Italy.

"They wanted me to try and get my hands on the ball more and work harder, getting in the positions to get the ball, working off my wing," he said.

"It was basically on form and I went away and I came off the bench against Northampton and got the ball in my hand for the first two minutes and I scored, which is good, and I tried to prove to the coaches why I should be in the team."

The Six Nations was a major disappointment for Wales, as they ended the tournament fifth with only one win, having won the title in 2021.

In the final match against Italy they fell to a shock defeat, with the Azzuri ending a 36-match Six Nations losing streak, but Rees-Zammit said the team wanted to make amends when they face South Africa in a Test series in July.

"There wasn't one player that wasn't absolutely devastated after the game, that kind of shows it all," he said.

"We felt kind of embarrassed that we let he fans down the day, it wasn't good enough so ultimately we've got to change that and this summer against South Africa is the perfect opponent to do so."

Rees-Zammit's rise has been rapid in the last three years, with 16 caps and six international tries to his name.

He was 18 when he made his debut for Gloucester in 2019 - becoming their youngest ever Premiership player - and he has scored 20 tries in 36 league starts since.

"If I take those learnings I know that I can do better if I have a poor game, for example. I know I can do some of the stuff I did last season, it's just when I get the chance I've got to take it," he added.

After finishing second from bottom in the Premiership last season, Gloucester are now in contention for a top four finish.

They have also progressed to the semi-finals of the Premiership Rugby Cup and the last eight of the European Challenge Cup - the latter a tournament the Cherry and Whites have won twice.

"We're in all three competitions; the Prem Cup, the Premiership and the Challenge Cup so we're looking to win them all," Rees-Zammit said.

"That should be our goal as we are still in them and in for a shout. We are taking it game by game and wherever that takes us it takes us."