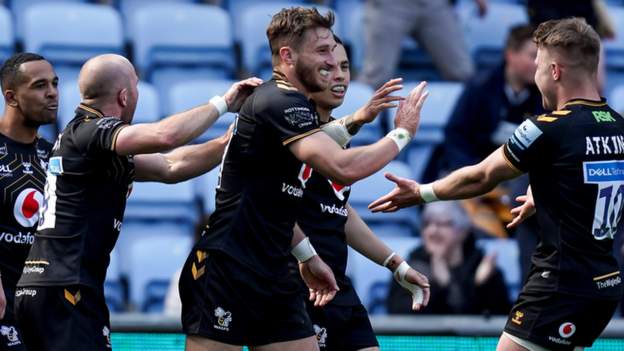 Wasps boosted their hopes of a top-four finish as they cruised to a bonus-point Premiership win over Worcester.

The Coventry side avenged their loss to Worcester at Sixways in December with six tries as they condemned Steve Diamond's Warriors to a heavy defeat.

Prop Tom West and winger Josh Bassett crossed for Wasps before the break.

Wasps' third straight league win reduces the gap to fourth place, with three games left, while 12th-placed Worcester are now just two points ahead of bottom club Bath, who would have climbed off the foot of the table had they not let a big lead slip to lose 36-31 at home to Northampton.

Wasps' eighth successive home win in all competitions was on course from the moment that prop West scored the opening try, converted by Jimmy Gopperth.

Bassett's second Premiership try of the season - and his first in the league this term at the CBS Arena - plus a Gopperth penalty earned a 15-0 half-time cushion before Doel scored his second try in three games early in the second half.

But tries for Oghre and Stooke stretched Wasps clear as they secured a bonus point.

Tom Willis came off the bench in the dying seconds to add an opportunistic try when he stayed alert to Gareth Simpson's fumble as Worcester shipped six tries or more for an eighth time this season.

"We've got two competitions and we will be going flat out in every single game from now on. There is no priority. You want to be winning both.

"That's a big statement. Everyone is going to say that, but it's about focusing on every game as it comes and we will see where that takes us.

"Overall I am pleased, we won with five points. It was good to see the way the game went at the end as we came away with two tries.

"I said a couple of weeks ago, it will always take time to gel. Sometimes we're not very patient, you expect it to click straight away as soon as you get some guys back and some key guys back."

"It's difficult coming to places like this when it doesn't go your way and there is a lack of confidence. There were certainly no teacups booted over at half-time.

"It was reasonably calm and for the first 50-60 minutes we were in it. But then it was just try, try, try and the calamity at the end just summed it up.

"At half-time we were not too far away from it. We scored first after the interval to make it 15-7 and then we fell apart in a couple of areas - certainly turnovers and not responding to their quick taps.

"It looks like a cricket score but we were in the fight for long periods. The chins had gone down a little by half-time and we tried to rally them. We had done well in keeping the ball but we had just not converted it into points."