Sharks 28-23 Leinster: Sharks up to fourth with win over league leaders 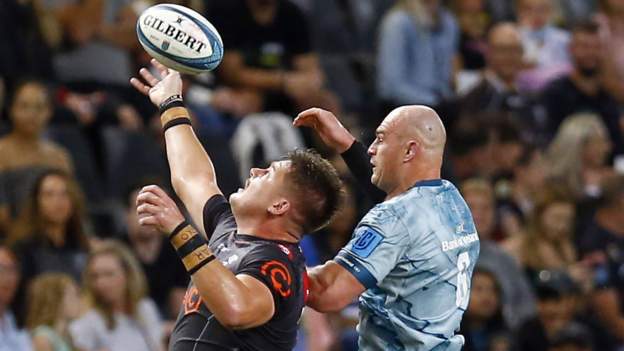 The Sharks took a huge step towards a United Rugby Championship play-off spot with a bonus-point win over Leinster.

With the majority of their senior players absent, the league leaders led for most of the opening hour in Durban.

Phepsi Buthelezi's 66th-minute try put the Sharks ahead before they held out on their own line in the final minutes.

The results means Leinster have not yet secured top seed for the play-offs, as they hold a nine-point lead in first with two games remaining.

Having started the match in eighth, the Sharks move up to fourth where they will enjoy home advantage in a play-off quarter-final if they can maintain the position.

Their result also means that Connacht can no longer qualify for the play-offs, with Scarlets now the only side still in with a chance of breaking into the top eight.

Lock Brian Deeny was also making his first appearance for the province, who struck first having soaked up early Sharks pressure before Scott Penny clinically finished with their first foray into the 22.

The lead lasted only three minutes as Makazole Mapimpi picked off Rory O'Loughlin's pass to stroll in untouched.

Leinster were on the back foot for much of the game but were far more clinical than their opponents and went ahead again through a scintillating score from Tommy O'Brien, who gathered Ciaran Frawley's crossfield kick before finishing superbly.

They were pegged back once again however as Aphelele Fassi exploited a broken field to surge through the defence and feed Jaden Hendrikse for an easy finish.

While Frawley's perfect place-kicking kept them well in the game, Leinster began to wilt under relentless Sharks pressure.

Bongi Mbonambi touched down from a driving maul before the visitors saw Josh Murphy and Lee Barron sin-binned in quick succession as they began leaking penalties in their attempts to slow the Sharks down.

By the time Buthelezi crashed over the momentum was all with the hosts, who looked set to kick on and see out the win.

However Leinster rallied and marched to within a metre of the Sharks' line as the clock went into the red, winning a penalty that saw Kerron van Vuuren yellow carded, but the hosts' outstanding defence held firm.