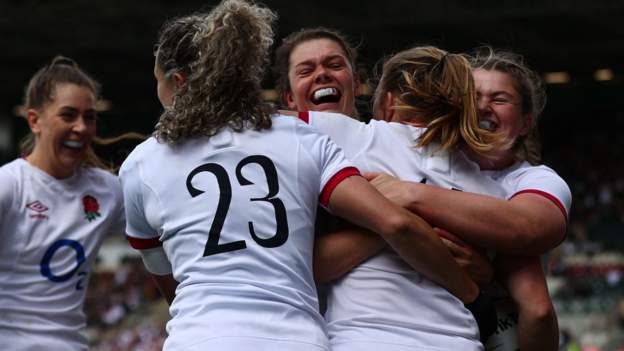 England produced another dominant Women's Six Nations victory as they beat Ireland 69-0 in front of a second successive record crowd.

Depleted Ireland's brave defence kept England to two tries in the first half.

The Red Roses came out stronger after the break, rewarding the crowd with another nine tries to set up a Grand Slam decider in France on Saturday.

The 15,836 Welford Road fans surpassed the record of 14,689 for a ticketed England home game set in Gloucester.

England's Emily Scarratt celebrated her 100th cap in her home town of Leicester with 10 points from the tee.

It is a 22nd victory in a row for world number ones England as they chase a fourth successive Six Nations title before October's World Cup.

Most of the pre-match talked had centred around two things: Scarratt's 100th cap and Ireland's expected struggles with many of their starting players away with the sevens side.

Scarratt's celebrations went as planned with her home town giving her an incredible welcome as she took to the pitch alone before the anthems.

But in the first half, Ireland did not stick to their allotted role of underdogs. It looked as if they might when Lark Davies then Abbie Ward went over for the hosts in the first six minutes.

Ward's score was ruled out for an earlier forward pass from Leanne Infante to Sarah Bern, and from there Ireland slowed England's charge.

Although a record crowd cheered England's every move, Ireland won a string of penalties at the scrum and were especially troublesome at the breakdown.

Their heroic defence was evident in the 134 tackles made in the first half, with hooker Neve Jones leading the charge on the floor as she won two of the side's five turnovers.

Occasionally England's professional pace - pushed by scrum-half Infante on her 50th cap - was too much for amateur side Ireland to cope with but the Red Roses made uncharacteristically sloppy errors as their running attack stuttered.

With selection for the Grand Slam decider and October's World Cup on England head coach Simon Middleton's mind, wing Jess Breach will rue the dropped balls that brought two of the Red Roses' runs to an end.

England were forced to rely on their forwards as Bern touched down in another rolling maul before Ireland fought back.

The visitors' first attack came after 20 minutes and resulted in a penalty in front of the posts which fly-half Nicole Cronin missed in swirling wind.

Helena Rowland, making her first start at full-back, was the star of England's attack but it is the second game in a row that the Red Roses have made a slow start, something they will not be able to afford against France.

While the nine penalties conceded by England were probably enough to prompt a rousing half-time team talk, Ireland managing to keep their hosts to two tries in 40 minutes constitutes a big win for the visitors.

Whatever was said in the Red Roses changing room clearly worked. They immediately made their passes stick after the break and flanker Marlie Packer produced a try-scoring run down the left that would feature in any winger's highlights reel.

Then wing Breach, unlucky with injuries in the past year, left the field holding her head after a clash of heads with Dorothy Wall that resulted in a yellow card for the Ireland flanker.

Taking advantage of England's extra player, Davies dove over from short range for her second try before Rowland once again stole the limelight.

The full-back held off several Ireland defenders and sent a long pass right for Lydia Thompson to score.

The onslaught continued as replacement Poppy Cleall, with a point to prove after being demoted to the bench, battered her way through four Irish tacklers to score.

England then opted for another rolling maul just to check it was still working and, despite valiant Irish defence, the Red Roses' fresh legs helped them over the line as replacement prop Hannah Botterman scored.

Things continued to worsen for the visitors as wing Eimear Considine was taken from the field on a stretcher and Cleall claimed a second try straight after.

Ellie Kildunne put in an impressive solo effort down the left wing, darting inside one Irish tackle and round another to score.

Scarratt then left the field - to cheers as loud as those that greeted her - for a head injury assessment after a clash with Ireland's Sene Naoupu, who was given a red card.

Scarratt later returned having passed the assessment, but Cleall was not so fortunate as she hobbled from the field with what looked like a leg injury.

England have won all four of their Six Nations games by more than 50 points thanks to devastating late flurries and they delivered once more as both Kildunne and Thompson went over again to complete another ruthless victory.

Player of the match - Marlie Packer