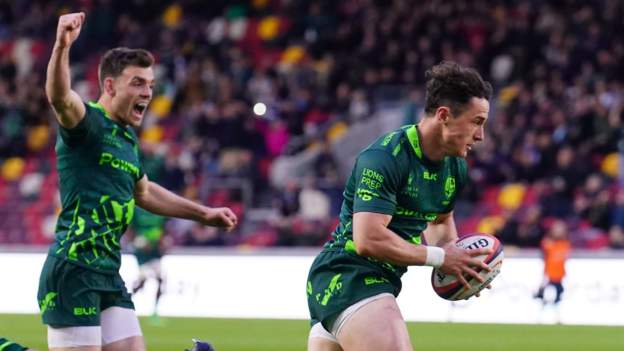 Both sides made a raft of changes but Irish proved far too strong, to end Leicester's hopes of winning three trophies this season.

Henry Arundel opened the scoring with Noel Reid touching down either side of two tries for Albert Tuisue, with Ben Donnell also scoring in the first half.

Arundel, James Stokes, Lucio Cinti and Will Joseph scored in the second half.

Irish reach their first domestic cup final since the 2002 Anglo-Welsh Cup and will play either Gloucester or Worcester, who meet in Wednesday's second semi-final.

Tigers finally replied with 15 minutes remaining as Bryce Hegarty broke from halfway and sent in scrum-half Sam Edwards to score, having just arrived on the field.

Winger Hosea Saumaki added a second try with a superb finish diving into the left corner.

Leicester still chase a Premiership and European double and host Bristol on Saturday.

The sit top of the Premiership, are guaranteed a semi-final, and host Leinster in the quarter-final of the European Champions Cup on 7 May.

Irish also return to the Premiership on Saturday, as Wasps travel to Brentford.