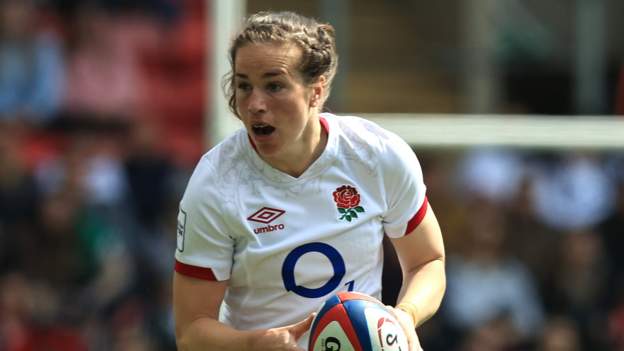 Emily Scarratt will captain England in the absence of the injured Sarah Hunter and Poppy Cleall is set to start at number eight for Saturday's Women's Six Nations Grand Slam decider in France.

The returning Sarah Beckett and Sadia Kabeya are two of six forwards named on the bench, with England anticipating an intense physical battle.

Cleall has had scans since sustaining her calf injury last Sunday and head coach Simon Middleton said "we're expecting Poppy to be fit" for Saturday.

"Everything's in place if she does break down prior to the game or during the game but we don't anticipate that being the case."

'The toughest game you can play'

England's last defeat by France came in the 2018 Six Nations, when they were beaten 18-17 in Grenoble.

Another tight and exciting game is expected, with England winning their last three meetings by four points or fewer.

The Red Roses have outscored France by 42 tries to 20 in the tournament so far but Les Bleues - in the same pool as England for October's World Cup - will be buoyed by a sell-out crowd in Bayonne.

"It's probably the toughest game you can play in international rugby at this moment in time - France in France," Middleton added.

"We've got to grab hold of the atmosphere as well as the game. We're in this business to get to these moments and see how good we actually are."

Cleall's inclusion is the only change to England's starting XV as she is named in the back row alongside Matthews and Marlie Packer.

Helena Rowland impressed on her first England start at full-back against Ireland and keeps the 15 shirt, with Lydia Thompson and Jess Breach again on the wings.

Scarratt captains from outside centre, with Holly Aitchison inside her as Leanne Infante and Zoe Harrison start at nine and 10.

Vickii Cornborough, Lark Davies and Sarah Bern remain in the front row with world player of the year Zoe Aldcroft and Abbie Ward the locks.

The only other changes for the hosts see Audrey Forlani come into the second row as Celine Ferer takes the place of Julie Annery at flanker.