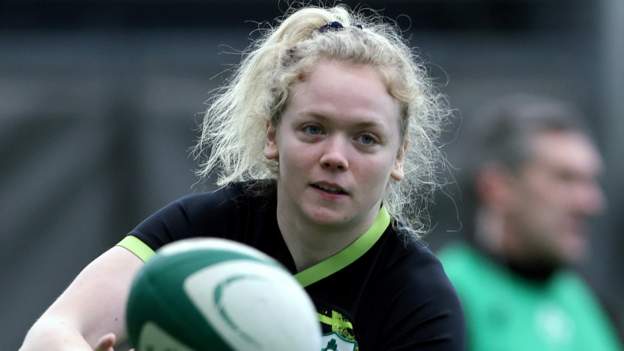 Full-back Vicky Irwin will make her international debut as Ireland conclude their Women's Six Nations at home to Scotland on Saturday.

The Sale Sharks back comes in as one of three changes from the side that was beaten 69-0 by England last weekend.

Sene Naoupu starts having been cleared to play following her red card against England.

The centre was sent off for a high tackle on Emily Scarratt but an independent judicial committee ruled on Tuesday that the challenge was only worthy of a yellow.

With Ulster native Irwin coming in at full-back, Molly Scuffil-McCabe moves to the left wing having made her debut at Welford Road last Sunday, with Aoife Doyle completing the back three.

Caughey comes in for her 14th senior international cap having not featured yet in this year's tournament, with Ireland seeking to close out the campaign with a win in Belfast.

The return of Monaghan sees Aoife McDermott drop to the bench in the only change to a pack that impressed at the set-piece against England.

Ireland sit fourth in this year's championship with their sole win so far coming at home to Italy in round three.

Scotland are out to avoid the wooden spoon as they currently occupy sixth in the table without a victory.

They can draw from recent success against Ireland, having secured a dramatic last-gasp win in September when the sides met in Italy as Ireland's hopes of qualifying for the World Cup were dashed.