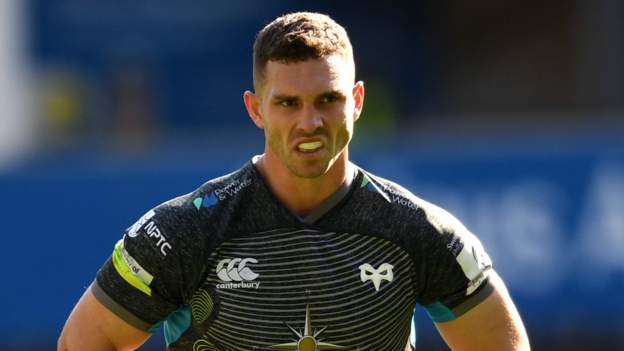 George North will make his return from a year out injured after being named as an Ospreys' replacement against Scarlets in the United Rugby Championship (URC) derby.

North suffered a knee injury in April 2021 against Cardiff and has seen his comeback delayed in recent weeks.

Ospreys have made one starting change to the team that beat Cardiff 22-6 with Mat Protheroe replacing injured full-back Max Nagy.

Props and first cousins Gareth and Steffan Thomas will line up against each other.

Ospreys head coach Toby Booth explained why there have been a few false starts over North's comeback.

"The last five per cent is the hardest part because you don't know how you respond to training, especially after a long-term injury," said Booth.

"Your body has to get used to the load you're putting through it.

"With George, we got him to that point and then his body would react and then we would have to back it down.

"It wasn't straightforward. We can only be governed by how the player feels and reacts.

"We've finally got to a situation where his body's good enough to back up to the training he requires to perform well. So he's now available.

"We'll see what happens after this weekend to see how he pulls up for the following game.

"It's important we have the welfare of our players at the centre of decisions we make."

The Heineken Champions Cup hopes will be on the line for both sides.

Finishing as the top region in the league means winning the Welsh Shield and results in Champions Cup qualification for next season.

Dwayne Peel's men lead the Ospreys by nine points heading into the match and will be crowned Welsh winners with victory in Swansea.

Ospreys, who have a game in hand over Scarlets, will be aiming to cut the gap and keep alive their hopes of competing with Europe's elite next season.

The Scarlets could also yet break into the top eight play-off places, while the Ospreys are also still mathematically in that equation but would see their hopes end should they fail to win on Saturday.

Ospreys head coach Toby Booth: "This is the west Wales derby and we haven't played the Scarlets at home in Swansea since I have been coach. It will be good to do that and with a crowd.

"We know how important this game is to supporters and people associated with the club and it's the same for the Scarlets.

Scarlets head coach Dwayne Peel: "It is obviously a big game with a lot at stake, it is perfect, both sides with something to play for.

"The Ospreys have been going well, they have been physical and we are expecting exactly that."