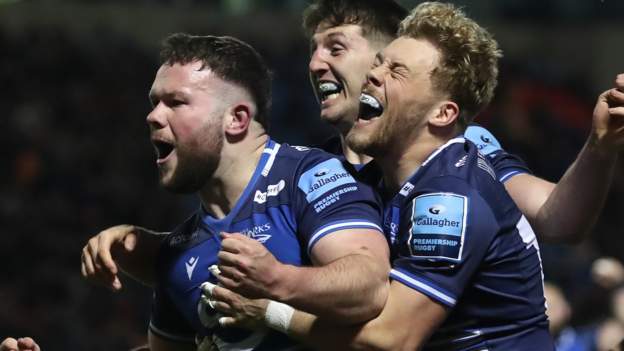 Sale moved into the Champions Cup qualification places with a 35-27 Premiership win over Newcastle.

George McGuigan's early Falcons try was cancelled out by Akker van der Merwe, before Joel Hodgson and Van der Merwe went over for each side in quick succession just before half-time.

Matias Orlando's close-range score with the final play of the game ensured Newcastle headed home with a try-scoring bonus point.

The win sees Sale move up to seventh place and keeps alive their outside hopes of a second trip to the play-offs in as many years - although they will need a lot of results to go in their favour. Newcastle remain in 11th place.

Three of the first half's four tries came from close range in what was at times a scrappy affair.

Hodgson's score in the left corner, after some quick hands from Adam Radwan, was the highlight before the Newcastle fly-half landed a penalty just before half-time to give the visitors a one-point lead.

It took just two minutes after the restart for Curry to force his way over to put the hosts back in front, but Carreras' excellent step around Faf de Klerk in the left corner, after some lovely passing, made it a one-point game again.

However, Hammersley's 53rd-minute try against his former club created an eight-point buffer and, despite Rohan Janse van Rensberg's yellow card for the hosts, Newcastle could not respond.

Ashman's try eased any nerves in the home crowd with 13 minutes left before Orlando made Newcastle's margin of defeat more respectable.

"We did well tonight. I didn't think we were necessarily trying to preserve ourselves in any way during the first half, but we weren't quite there I suppose.

"We've talked about the Racing game during the week of course, and subconsciously it was there in the back of our minds I thought in the first half. You can't really help that. We improved in the second half, though.

"We proved that we can move up the levels and we need to maintain those levels for next weekend. We also scored some decent tries on the night too, which was pleasing."

"It's all about how you apply yourself and I knew all along that the boys would be doing that and be prepared to do that.

"The game was played with a lot of pace at times and I think 10 minutes before half-time a lot of the boys from both sides were feeling the pace of the game and were a little bit tired.

"But everyone got their second wind at half-time and came out and produced a good performance in the second half."